Summary of in Praise of the F Word

In the article, “In Praise of the F Word” by Mary Sherry, Sherry talks about the educational system and how the handing of high school diplomas is meaningless. The problem concerned is that these high school graduates are founded to be semiliterate when entered into the real world. Sherry teaches basic grammar and writing for adult literacy programs, hearing the different and unpleasant experiences of graduates being passed along high school.

Sherry argues that teachers flunking their students should be seen as positive teaching tool, and creates the expression of confidence by both teachers and parents that the students have the ability to learn the material presented to them.

Don't use plagiarized sources.
Get Your Custom Essay on Summary of in Praise of the F Word Just from $13,9/Page

She would never forget the teacher that grabbed the attention of her world-class charmer’s son. Mrs. Stifer was his English teacher, who was the first teacher to ever threaten him with the trump card of failure.

With the support of Sherry and his teacher, the attention for making English his priority suddenly changed, making him finish out the semester with an A.

Sherry then explains the angry and resentful students for having been passed along high school. She states the effect of passing students who have not mastered the work cheats them and the employers who expect graduates to have basic skills.

The students eventually get frustrated with bitter comments such as, “I don’t know how I ever got a high school diploma. She generalized this dishonest behavior by saying the kids can’t learn if they come from terrible environments, but then argues that the real reason is that most kids don’t put school as a priority unless something is at stake. She claims that most students would rather be cruising along. Sherry then discusses the difficulties that students may have, but still making education their priority. Students are motivated for success and the desire for a better job, giving them the healthy fear of failure.

She believes this fear of failure, whether economic or academic, can motivate students of all ages. Sherry concludes that flunking is seen as a positive teaching tool, that enables to show the the confidence of students having the ability to learn the material presented to them. She believes it would take the teachers to follow through on taking this action, and saving them from the long term illiteracy. It would mean no more of passing the kid that’s nice, but helping them with the opportunity to succeed- or fail.

Summary of in Praise of the F Word. (2016, Nov 11). Retrieved from https://studymoose.com/summary-of-in-praise-of-the-f-word-essay 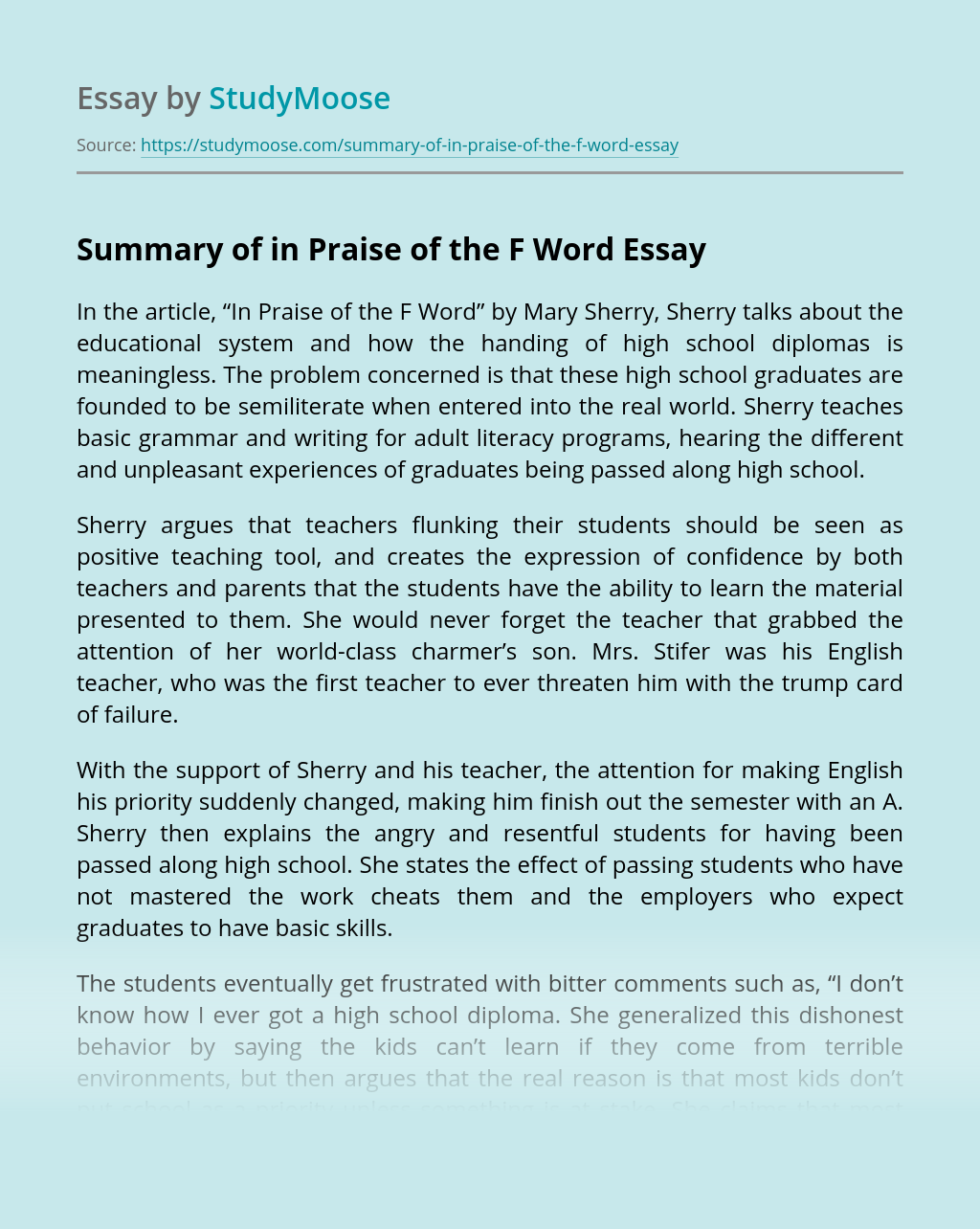 The Lonely, Good Company of Books

As a child, I was always told that reading was going to be in my educational life for as long as I was in school and as I got older it was only going to get more complex. I never quite understood why books like Shakespeare were so important to my education but I was...

View sample
Thanks to My Hardworking Father

Jose Quiles Prof. J. Robinson Eng 100-F80 August 06, 2009 Thanks to My Hardworking Father It is very fortunate for a kid to have his father around. In the last thirty years, having both parents in the household was rare. Most of my friends I grew up with only had their mother around. To all...

The article “Taking Women Students Seriously” written by Adrienne rich focused on the difficulties faced by women students in a male dominated society of the times and provided valuable insights to women teachers to help women students to think critically and discovering their true worth. The underlying theme of the article is to prove that...

School is no longer limited to simple reading, writing and arithmetic. The use of technology has expanded the prospect for education, giving us never-ending possibilities. Therefore, technology deserves significant school attention in order for students to possess technological survival skills. The positive effects of how it can be used in the classroom to enable learning...