In Praise of the F Word

In Mary Sherry’s essay, “In Praise of the F Word,” the author encourages all parents and teachers to use failure as a form of encouragement. Sherry would like for them to use it as a way to motivate students to do better and want more when it comes to their education. What Sherry believes in is that the threat of flunking is a “positive teaching tool” (566).

In Praise of the F Word by Mary Sherry Summary

Mary Sherry in praise of the F word uses a variety of examples to support her claim.

Don't use plagiarized sources.
Get Your Custom Essay on In Praise of the F Word Just from $13,9/Page

The author’s main source of evidence used to support her claim was personal experience. Sherry shares with us her son’s senior year high school experience. He was not putting in the necessary effort needed in class and his English teacher, Mrs. Stifter was not willing to tolerate it. She then said to Sherry that she would flunk her son. Without having seen this type of approach before Sherry was flustered.

Not once before had her son been threatened by a teacher like that, but she managed to agree with her approach in the end. Her son realizing he would fail and not graduate, made English class a priority and passed with an A grade (Sherry 565).

One of the many night students that Sherry teaches said, “I was a good kid and didn’t cause any trouble, so they just passed me along even though I didn’t read well and couldn’t write,” this example shows that instead of the teacher using a method that gives her the power she needs, students do as they please without much effort. Sherry’s son was the type to get away with many things until now faced with the fear of failure.

The greatest strength in Mary Sherry’s argument is the involvement of her night time students. I believe the things some of them had to say about their personal education experiences helped me fully understand and support Sherry’s claim. I have also personally heard people question their reasons for receiving their high school diploma, I have heard people say they never received a passing grade on an assignment but had a great relationship with the instructor, so they passed the course.

The things that some of the students stated and experienced were examples of what I saw in my high school. I enjoyed the way the essay flowed, not a thing seemed to be randomly inserted and was easy enough to interpret. Lastly, I liked the way Mary Sherry included her personal experience with her son, it was a way of demonstrating that situations where students are accustomed to simply sailing by are happening everywhere.

The greatest weakness in the argument is the lack of a possible outside source. I would have liked to see numbers or a study conducted to see how many students have experienced situations where they didn’t have to do much to earn their diploma. I also think it would have been great to include other teachers’ perspectives on this subject and if whether or not they think it is a good idea to praise the F word. I think research could have made the essay a lot more reliable and persuade the readers even more.

Overall, Mary Sherry presents her audience with a compelling and convincing argument. I believe she did an excellent job on persuading readers to agree to this form of teaching to help improve education by stating that, “students don’t put school first unless they perceive something is at stake in the end. They‘d rather be sailing” (Sherry 566). Sherry did a good job on repeating the need for having a fear of failure and having the threat of flunking as a positive form of teaching for students in a way to try and convince her readers. 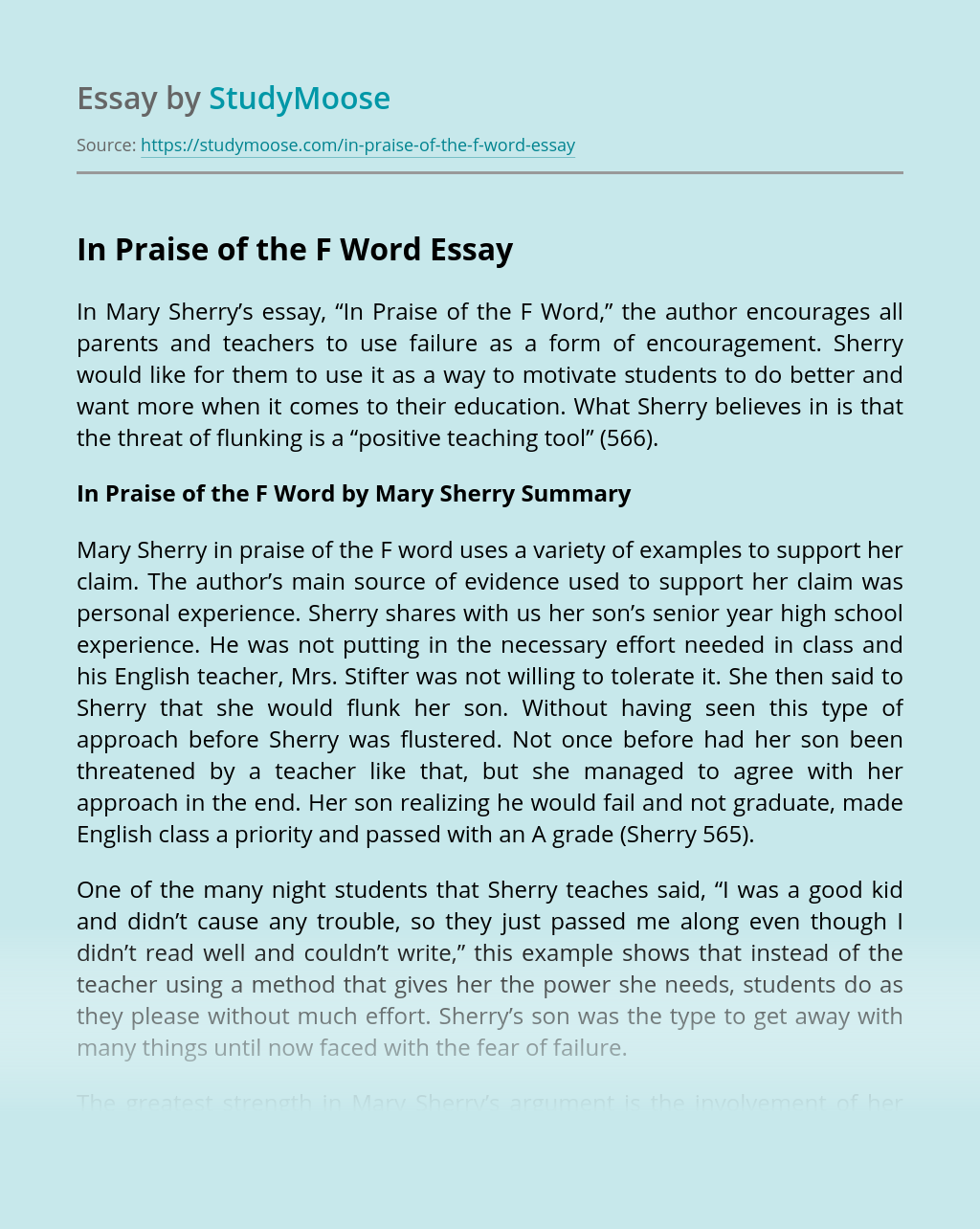 Laptops in the Classroom

The article “Laptops in the Classroom? No Problem” by Elena Choy is started with a great quote that makes the readers think about their instructor . “A teacher is someone who never says anything once (106). ” Choy puts up an argument about whether or not laptop computers should be banned in the classroom. She...

There are many people in today’s society that believe going to school is essential in order to live a rewarding life. What people don’t understand is the fact that there are many different aspects of education and some are more important than others. Although practical knowledge is important to learn, there is a big difference...

Education is often considered the greatest opportunity you can give a child, purely from what the child can do with that Education, will they become a Doctor and save 100 lives? Or become a Scientist and cure Malaria? They will also learn to be civilized, moral and then spread that to their children whom will...

Both SADD and MADD have had various positive impacts to the society supportive implications to the well worth of the society in correspondence to the influence they have to our society. The Original meaning of SADD was “ Students Against Drunk Driving” but have changed to mean “Students Against Destructive Decisions”. Robert Anastas founded SADD...

Teachers A teacher could simply be defined as one who teaches, or an individual who imparts information or skill to a person. Different types of teachers have different methods of passing on their knowledge. There are three types of teachers informative, nonchalant and friendly. There are specific teachers for each students and it is the...