Stress in Law Enforcement
Stress plays a part in the lives of everyone. Some stress is not only inevitable, it can be good. For example, the physical stress of “working out” improves your cardiovascular system, and feeling pressure that causes you to study harder for an exam can improve your score. Police stress, however, refers to the negative pressures related to police work. Police officers are not superhumans. Law enforcement officers are affected by their daily exposure to human indecency and pain; that dealing with a suspicious and sometimes hostile public takes its toll on them; and that the shift changes, the long periods of boredom, and the ever-present danger that are part of police work do cause serious job stress.

Don't use plagiarized sources. Get your custom essay on
“ Stress in Law Enforcement ”
Get custom paper
NEW! smart matching with writer

The secretion of adrenaline heightens awareness, a vital survivor factor that police officers need when confronted with life-or-death situations. The resistance stage is characterized by more control and a greater ability to withstand the effects of stress while maintaining high performance and is caused by prolonged exposure to a stressful situation. For a police officer examples of this could be drawn-out domestic disturbance calls, or hostage situations, even though the stress inducing danger still might be present an officers body adjusts to the situation and tries to return to normal. Lastly the exhaustion stage comes into play when the resistance stage is ending.

In the exhaustion stage, tiredness overcomes the coping mechanisms, and the responses that were experienced in the alarm stage. The officer could face problems such as chronic fatigue or depression, feelings of alienation develop. The officer’s body continues to produce high amounts of adrenaline, the heart becomes overworked and blood and cholesterol levels increase and actual tissue damage can occur. When this happens it can produce illnesses such as heart disease, gastric disorders, arthritis, allergies, and kidney disease. Police stress arises from several features of police work. Alterations in body rhythms from monthly shift rotation, for example, reduce productivity. The change from a day to a swing, or graveyard, shift not only requires biological adjustment but also complicates officers’ personal lives. Role conflicts between the job—serving the public, enforcing the law, and upholding ethical standards—and personal responsibilities as spouse, parent, and friend act as stressors. Other stressors in police work include: Threats to officers’ health and safety, Boredom, alternating with the need for sudden alertness and mobilized energy, Responsibility for protecting the lives of others, continual exposure to people in pain or distress, The need to control emotions even when provoked, The presence of a gun, even during off-duty hours, The fragmented nature of police work, with only rare opportunities to follow cases to conclusion (Matti, 2011).

Administrative policies and procedures, which officers rarely participate in formulating, can add to stress. One-officer patrol cars create anxiety and a reduced sense of safety. Internal investigation practices create the feeling of being watched and not trusted, even during off-duty hours (Matti, 2011). Officers sometimes feel they have fewer rights than the criminals they apprehend. Lack of rewards for good job performance, insufficient training, and excessive paperwork can also contribute to police stress. The criminal justice system creates additional stress. Court appearances interfere with police officers’ work assignments, personal time, and even sleeping schedules. Turf battles among agencies, court decisions curtailing discretion, perceived leniency of the courts, and release of offenders on bail, probation, or parole also lead to stress. Further stress arises from perceived lack of support and negative attitudes toward police from the larger society.

Stress also stems from distorted and/or unfavorable news accounts of incidents involving police. The inaccessibility and perceived ineffectiveness of social service and rehabilitation agencies to which officers refer individuals act as further stressors. Stress contributes not only to the physical disorders previously mentioned, but also to emotional problems. Some research suggests that police officers commit suicide at a higher rate than other groups. Police stress can create high rates of divorce among police officers. And that police work inhibits nonpolice friendships, interferes with scheduling family social events, and generates a negative public image. Furthermore, they take job pressures home, and spouses worry about officers’ safety.

Systematic studies do not confirm the widely held belief that police suffer from unusually high rates of alcoholism, although indirect research has established a relationship between high job stress and excessive drinking. Finally, officers interviewed cited guilt, anxiety, fear, nightmares, and insomnia following involvement in shooting incidents. In the past, departments either ignored officers with problems or dealt with them informally by assigning them to desk jobs. During the 1950s, some departments began to formalize their responses, usually by incorporating officer-initiated Alcoholics Anonymous groups made up exclusively of alcoholic officers. In the 1970s, departments instituted “employee assistance” programs to deal with problem officers, particularly those suffering from alcoholism. These programs have expanded into a broad range of responses to police stress. Some programs focus on physical fitness, diet, relaxation, and biofeedback to cope with stress. Others emphasize family counseling to involve spouses in reducing police stress.

The police departments have started to put programs together to help police officers deal with stress. As we saw in the video we watched in class in the NYPD they created a chaplain unit and early intervention program along with others to provide officers with safe, comfortable places to go to help alleviate stress. Police Departments should continue to help officers cope with stress because stress can lead to heart problems and physical diseases, such as cancer and heart disease which limits the officer’s ability to contribute their full ability to the department. City officials and police executives should enact a plan to reduce stress among personnel they can create a four step plan. The four steps are assessment, planning, action and follow-through to ensure that the correct problems are detected and treated and then the progress is monitored and adjustments are made if necessary.

The first step, assessment is when the police executives must identify the problems affecting the supervisors of the departments; by listening to them you will then be able to make a diagnosis. Step two is planning after you have made your diagnosis of the specific stress factors specialists and administrates must continue to find ways to improve the situation. Step three is action, whatever solution is selected it must be put into full effect and maintained. Because no matter how long you talk about the problems and the solutions it won’t fix the problem unless you act and are consistent. Lastly step four is the follow through this is a very important step because you need to monitor the success of those actions taken in step 3, and evaluate the success if it is working keep it the way it is or if not fine-tune the programs to make them work.

The responsibilities of police officers are complex and range from small tasks to life-or-death situations. The job sometimes requires making decisions and in an emergency a mistake may occur. These situations that are encountered on the job create stress for the officers which inevitably result in poor health. The macho image of the police officers prevent them from seeking help so instead they turn to drugs and/or alcohol, and unfortunately sometimes suicide as way to resolve their problems(Cheek, 1983). We must educate and create awareness about the possible causes of stress for police officers to eliminate officer suicide and drug or alcohol abuse.

***Sidenote: I found a video online while doing my research the name is “The Pain Behind the Badge” it is about stress and law police officers it’s a documentary. It is produced by a company called 100watt productions. 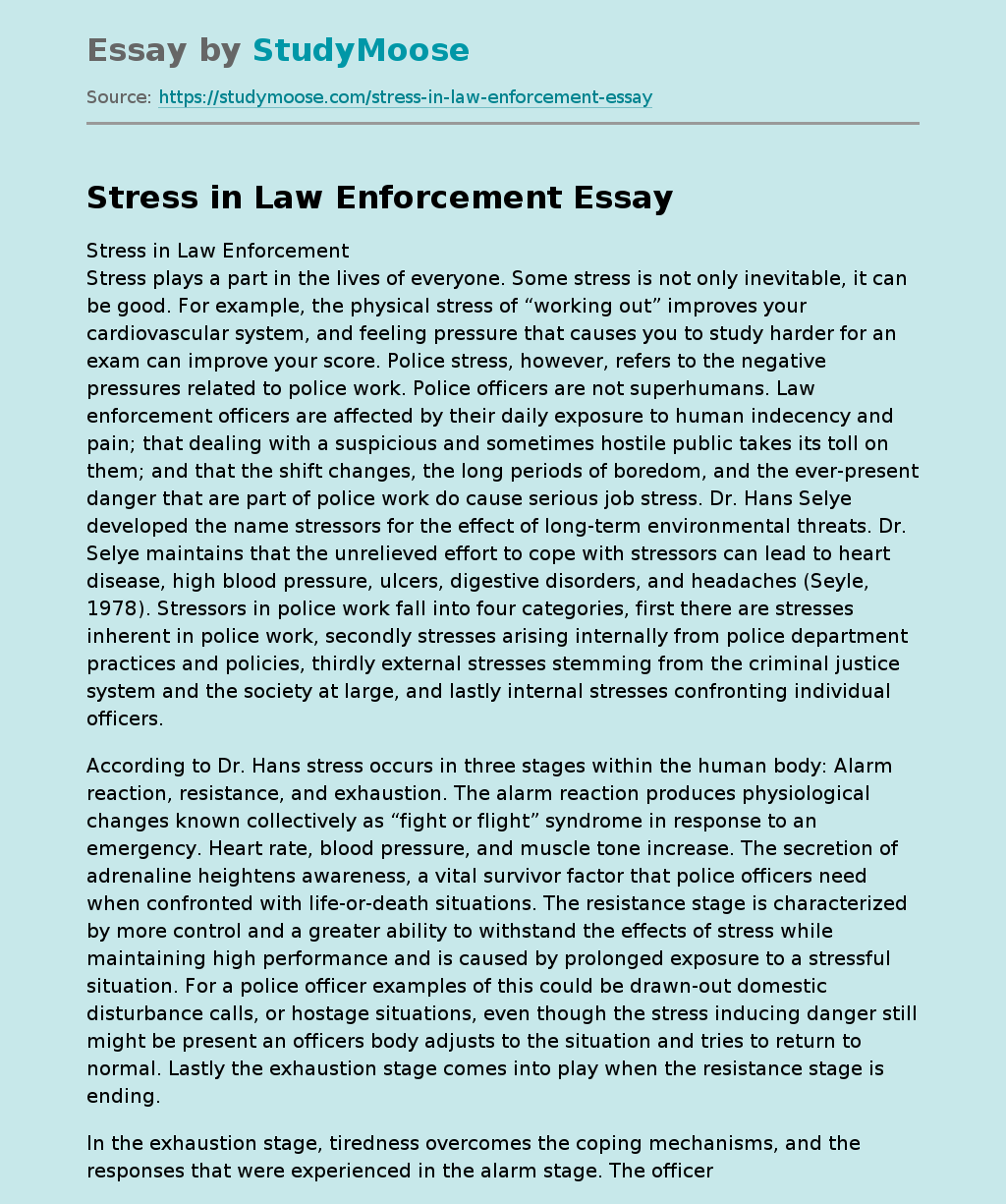