Police Officers Should Not Carry Guns

Don't use plagiarized sources. Get your custom essay on
“ Police Officers Should Not Carry Guns ”
Get custom paper
NEW! smart matching with writer

They are actually the person before the police officer. Normaly, we need police officers not only for our security. Ther functions also about social aid and health, as it is written on the laws. Social aid and health about human rights but guns are completely the opposite of these good feelings and ideas. I do not think, somebody wants from help to pollice officer who has gun with him.

That is a big fear, guns awe us. I read an article about search police officers did at a school to find in some kinds of drugs; however, they did not find any drugs. In addition, they threatened the students to kneel down with their guns. All students were frightened because they were pointign a gun at them. In spite of, they having to protect the people with their gun. Next, police officers use their guns againist criminals. But youngsters and children are exposed to their guns almost everyday. So, they will tend to violonce. They can be new criminals of the future. Maybe they will elaborate on police officers’ guns, because guns are so common in the world today. They thought like that, ‘if it is not good or necessary, why police officers carry them?’. These kind of thought, so normal for a young person or a teenager. Other reason is, the state pay much Money to guns every year. If the money is used for education and social facilities, surely, the crime rate will drop year by year. So, that is better to money us efor these kind of activities. We must think about this question, ‘do we want to drop of crime rate or do want to punish someone who crimes?’.

If the answer first I said, we have to pay money for education and the other social facilities. It is important to outline that the work of police was always in the centre of attention. There is a very serious deliberation about it, which is connected with factors, such as the rate of criminality and a psychological factor of carrying a weapon. The situation with the growth in the number of committed crimes is very notorious and dangerous. As a result, in society was formed a particular opinion about the work of police. Many people suppose that police officers should carry their guns because it can influence criminals, and the number of crimes will decrease. However, it is not a secret that in countries where police officers are obligated to carry guns the index of crimes is higher than in the UK.

At the same time, there is a reasonable opinion that not carrying guns by police officers reduces the amount of violence. Last, it is a very widespread opinion among people that a gun is the tool, which can be a serious psychological weapon in the fight with criminality. It is believed that criminals can be afraid of armed police officers. However, many facts contradict this position because in the world there were many examples when crimes were committed by very brutish offenders, and these criminals were not stopped with guns.

However, not carrying guns provide society with a positive example when police demonstrate that they are able to resolve any problem without using weapons. In conclusion, the author of the present essay wants to clarify the key points of the discussion. There is a widespread opinion in society that weapons are a remedy, which resolves many problems with criminality. At the same time, much data suggests that, in many cases, weapon is not able to stop a criminal. In addition, it is vital to emphasise that not carrying guns is a good example for all people to be less violent. As you can see, there are many reasons not to be armed police officers.

Police Officers Should Not Carry Guns. (2016, Oct 06). Retrieved from https://studymoose.com/police-officers-should-not-carry-guns-essay 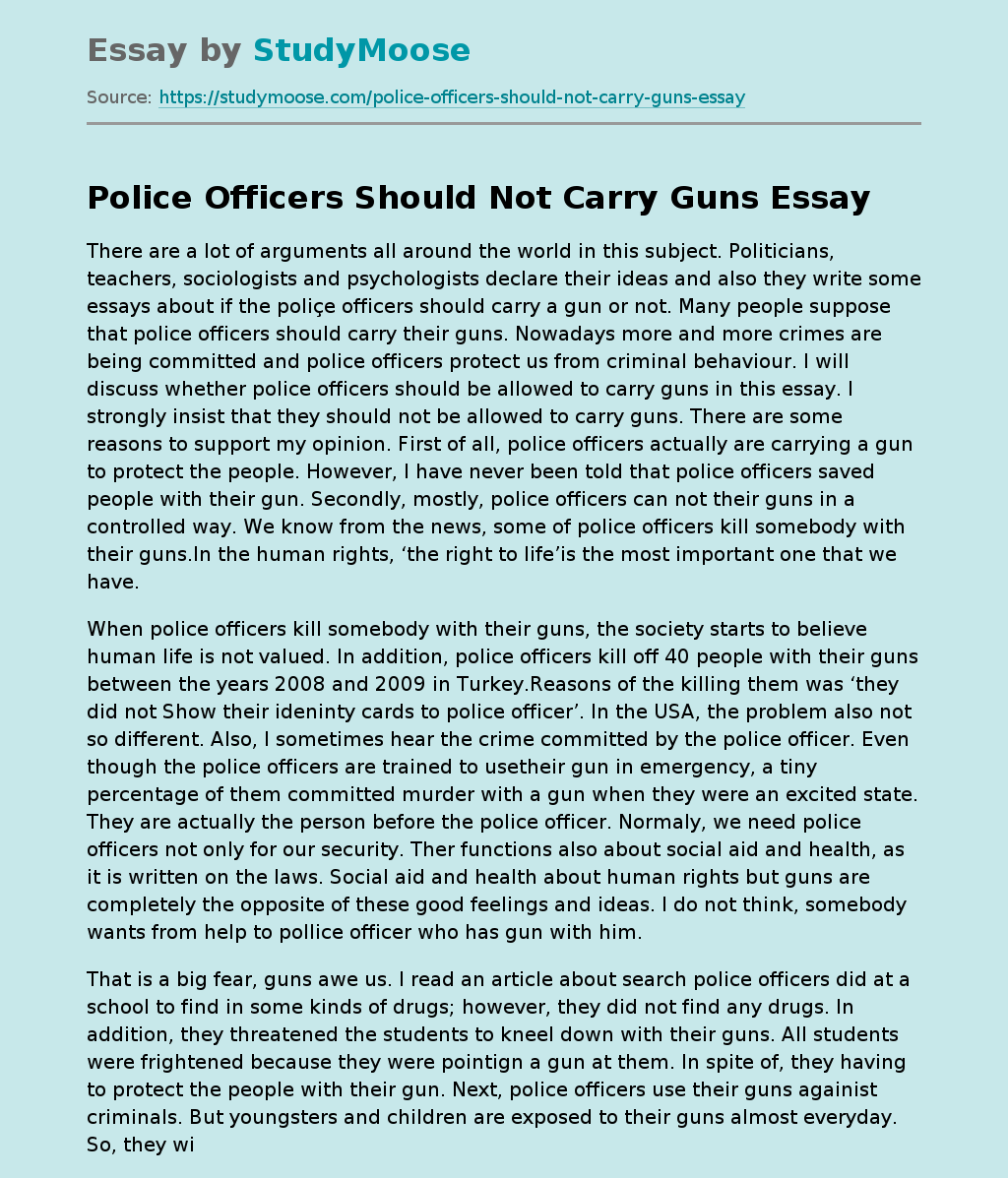