Crime and law enforcement dramas have been on the air since the mid-nineties. Since its inception, the genre has seen several hallmarks such as Criminal Minds (2005), Zodiac (2007) and The Mentalist (2008). There are countless films and television series within this niche, each attempting to present their take on the now saturated genre; it is safe to say that now, ideas and tropes within the genre are well-explored and established. Despite the already crowded and arguably overdone genre, Mindhunter (2017) aired on Netflix to critical acclaim and was named amongst the best television shows of 2017 on both the Time magazine and Metacritic.

Don't use plagiarized sources. Get your custom essay on
“ Crime and Law Enforcement Series Mindhunter (2017) ”
Get custom paper
NEW! smart matching with writer

What is intriguing about Mindhunter’s success is that it is not based on any new or original concepts or twists. It is not a Psycho-pass (2012) with its Sybil System (an omnipotent supercomputer that can detect criminals) or a Blade Runner 2049 (2017) with its replicants (engineered, manufactured ‘humans’). Instead, Mindhunter explores a premise like that of Criminal Minds; it follows agents working at the Federal Bureau of Investigation’s (FBI) Behavioural Science Unit (BSU).

Mindhunter is set in the 1970’s, when the term ‘serial killer’ was not yet coined. The series follows detective Holden Ford in his task to profile the minds of serial killers. As conventional methods of criminal profiling were no longer adequate for analysing the increasingly complex and psychopathic acts of murderers, Ford attempts to construct new profiling methods by interviewing incarcerated serial killers for insights into their criminal mind.

The story of Mindhunter is largely centred around its main character Holden Ford; played by actor Jonathan Groff, he is present in nearly every scene.

Due to the show’s familiar, albeit rather unoriginal premise, there is a need for an increased focus on its other aspects in order for the series to shine. In particular, Ford’s consistent and dominant presence throughout the series mandates a heightened focus upon his character. In the introductory episodes, however, Ford’s character appears typical and uninteresting. Mindhunter opens with Ford in a hostage negotiation (E 01). He is methodical and follows protocol but does not manage to deescalate the situation appropriately: the perpetrator commits suicide on the scene. Following which, Ford is taken off operations and relegated to teaching courses to FBI trainees.

At first glance, Ford appears to lack any sort of trait that might appeal to an audience. He seems to be a run-of-the-mill FBI agent; he does not appear to be particularly skilled, instead he is depicted to fail in his first scene. Even after he meets his colleague and detective partner Bill Tench and begins interviewing and studying psychopathic serial killers, his work is still seemingly mundane. He interviews serial killers and works on murder cases, nothing out of the ordinary for any typical procedural crime drama.

How then, can a television series with such a (allegedly) disinteresting main character be met with such critical acclaim? To better understand this intrigue, this essay will attempt to identify and analyse the traits of Ford that appeal to the audience in a non-traditional sense. It is thus the aim of this essay to explain the appeal of Mindhunter through the analysis of the main character Holden Ford. Specifically, two aspects of Holden will be brought to light: his unsettling obsession with serial killers, as well as the development of psychopathic behaviours in his character. It is thus this essay’s thesis that Ford attracts the audience because the two aspects above appeal to their dark subconscious; Ford’s twisted obsession appeals to the viewers’ inherent morbid, macabre fascinations, while his behavioural regressions relate to the viewers’ Unconscious (Freud 116). 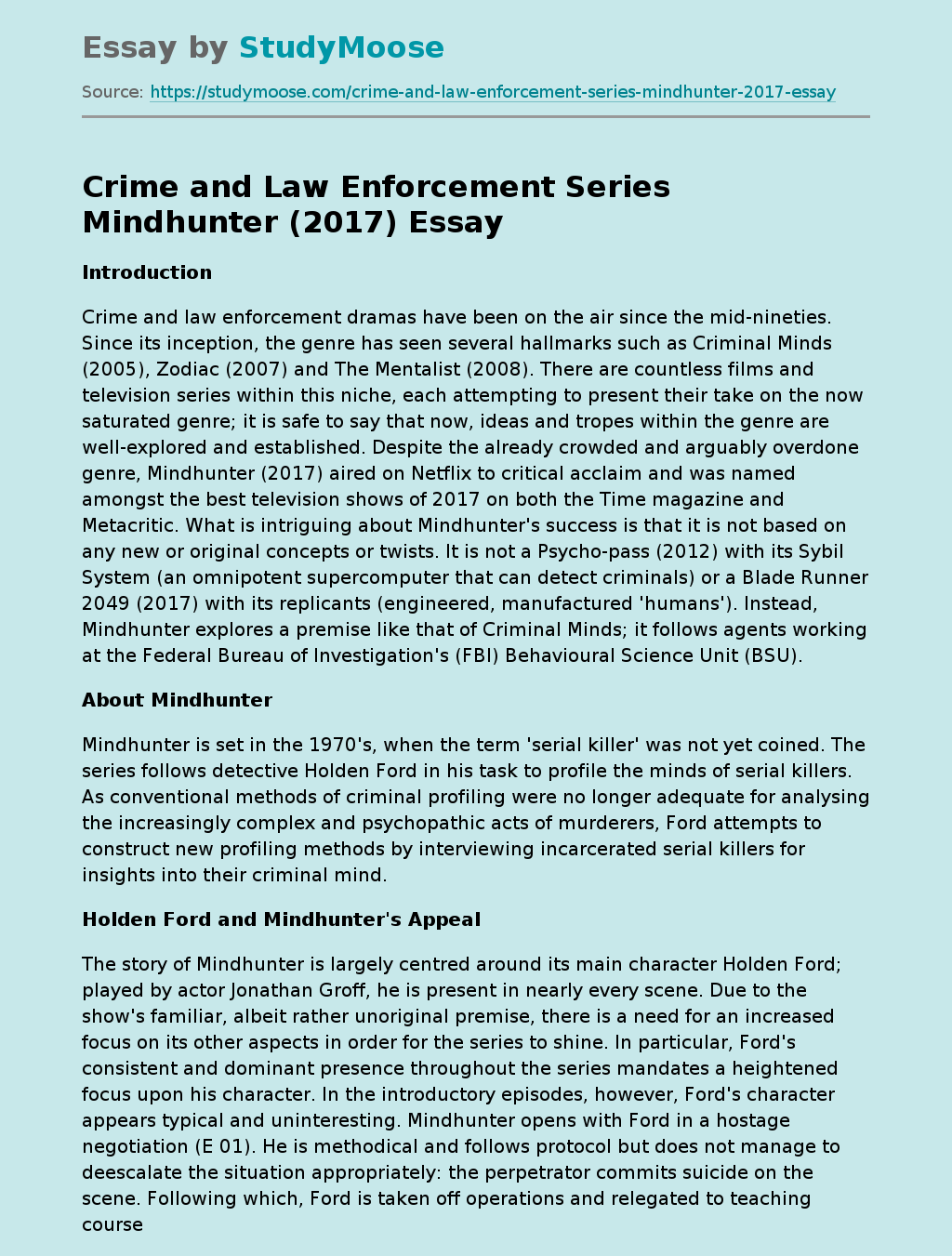