Meno is among the Socratic dialogues that were inscribed by Plato early in the Fourth Century B. C in Greece. Plato wrote the article in an attempt to determine the befitting definition of virtue as he understood it. He wanted to come with a common meaning of virtue which applied evenly to every particular virtue; this he succeeds with the use of the dialogue between Socrates and Meno. The dialogue between Meno and Socrates tries to define what aspects makes a human being good and what makes him or her bad.

Don't use plagiarized sources. Get your custom essay on
“ Socrates Philosophy in Meno Dialogue ”
Get custom paper
NEW! smart matching with writer

Plato as well introduces another theme in the talk anamnesia. Anamnesia suggests that human soul is eternal and it understands everything, and merely “recollects” for the purpose of learning. The article brings out the ideological difference between Meno and Socrates.

Meno first points out that virtue is different from person to person but Socrates believes there is a common definition for all. Socrates rejects Meno’s assertion that virtues depends on factors like age and gender.

Meno secondly suggests that the “capacity to govern well” (Plato, 2009) could be a virtue to all. Socrates mentions to the slave master, Meno, that “governing well” can never be a virtue of a slave, since he would then not be a slave anymore. Meno also suggests that virtue is yearning for fine things and the influence to get them. Socrates notes that this brings about another dilemma- a lot of people don’t recognize what is evil.

Socrates drew geometric shapes on the ground to articulate how a slave is originally ignorant of finding double the square area.

Socrates explains how, before he randomly picked the slave boy from Meno’s entourage, the slave boy had spoken “well and fluently” on the topic (Plato, 2009). Socrates remarks that the “numbing” he effected on the slave boy did not harm him. Afterwards he draws another square shape diagonally; the slave boy can now observe that adding horizontal and vertical lines from the square corners, the area created is double the size. Socrates gets the slave boy to concur that the area is doubled and the slave boy admits to “spontaneously recovering” knowledge from a previous life. Witnessing the slave boy example, Meno finally concurs with Socrates in his “innate” theory (Plato, 2009).

Virtue is something that someone learns from the environment that he or she has been brought up in. Sometimes the degree of holding on to a belief as being true depends on how seriously the subject matter is taken in the society one is brought up in. Knowledge and virtue are closely related but can be mutually exclusive. When a child grows up he or she learns new things by observing the environment, and based on his observations will decide what is virtuous and what is not. This is mostly based on his reaction to the society’s treatment or punishment of alleged vices. When he or she grows he forms his own opinion of what is good and what is bad, based on his interactions in life. Reference: Plato. (2009). Meno. Arc Manor LLC. 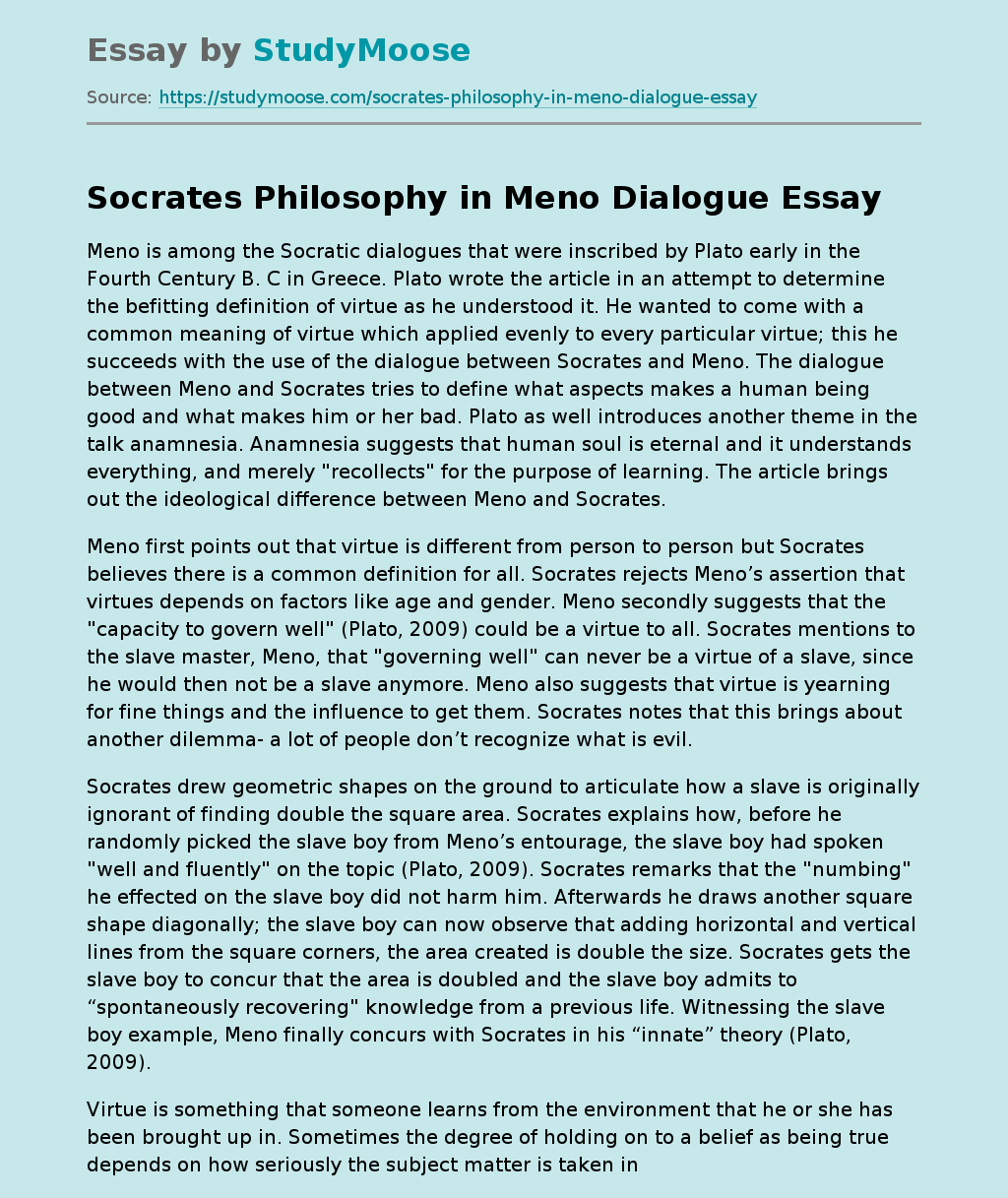