Characterization through Dialogue in Hemingway’s Works

Alan Pryce-Jones (qtd. in Lamb 453) stated to describe the creative contribution of Ernest Hemingway in Literature that it is “his innovative dialogue might turn out to be his enduring memorial as a writer.” On the other hand, Elizabeth Bowen (qtd. in Lamb 454-455) said that dialogue in short stories or novels should copy as much as possible several “realistic qualities” of a conversation, namely: spontaneity, ambiguity, artlessness, allusiveness, irreverence, and erraticness.

She further adds that the use of dialogue for the cause of exposition is rarely used for this purpose considering that elaboration can be done right at the start of the story.

Don't use plagiarized sources. Get your custom essay on
“ Characterization through Dialogue in Hemingway’s Works ”
Get custom paper
NEW! smart matching with writer

The use of dialogue to expose components of the story, particularly characterization, plus the drama inherent in it, is very difficulty to do.

To start, the elementary literary definition of characterization of a story can be pursued by direct means. This is where the author narrates things concerning the character. A way to do this is bay giving description of the clothes the character wears, the manner by which he gesticulate,  or the way he stride on the street.

The second means is through indirect method. This technique is shown on how he speaks, reacts and acts. The most usual way a writer address this component of characterization is done using the latter technique. And this is applied usually through dialogue or through the conversation between two characters.

Ernest Hemingway wrote the Hills Like White Elephants in 1927. This story is included in the short story anthology Men Without Women.

The story runs about a woman and a man. Both are sitting at a bar in a station waiting for a train going to Madrid. And they talk. By the way they converse, it is obvious that have spent sometime with each other. If the reader would casually read how the conversation happening between the two go, he will from the start of the story until it is finished end up clueless as to what is going on with the characters in the story. In a sense, Hills Like White Elephants display the iceberg theory of Hemingway and his deftness in handling dialogue in a story.

If Hemingway was widely seen as a writer who wrote primarily for the dominating male, in Hills Like White Elephants, he is able to dissect the workings of a relationship where females most of the time are subjected to an unbalance relationship and furthermore dominated by the males (Raeburn 208). The means by which Hemingway is able to exploit this is through his creative creation of dialogue that discloses the characteristics of the couple: their speech, action and reaction.

Through the use of dialogue, Hemingway is able rise to the dexterous ability to give character to his protagonist and antagonist. For a reader to totally appreciate and efficiently understand the characterization that Ernest Hemingway applied in Hills Like White Elephants and also to most of his stories, the reader first ought and must understand the tool and method by which the writer employ to express implicitly and indirectly the drama that is happening between the characters.

This tool which ingeniously utilized by Hemingway is technique in his stories is called dialogue. Hemingway’s stories, as exemplified by Hills Like White Elephants, mainly runs marvelously through the innovation and utilization of the form of dialogue. This single-handedly tackled major aspects of characterization like speech, action of the characters and reaction of the characters. To quote again Alan Pryce-Jones (qtd. in Lamb 453), the creative contribution of Ernest Hemingway in Literature is “his innovative dialogue might turn out to be his enduring memorial as a writer.”

Characterization through Dialogue in Hemingway’s Works. (2017, Jan 13). Retrieved from http://studymoose.com/characterization-through-dialogue-in-hemingways-works-essay 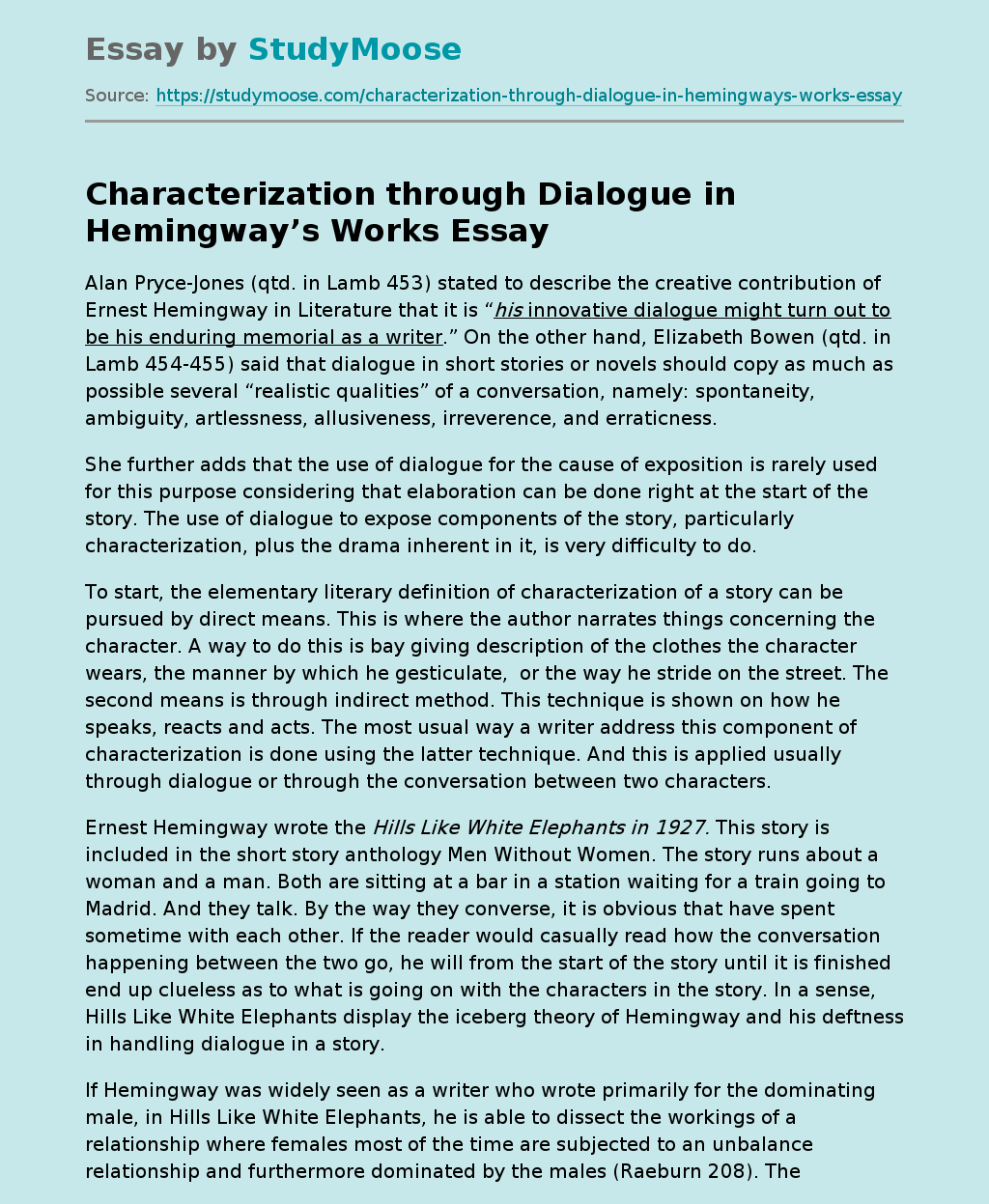