Empiricism is the view that all knowledge comes from experience whatever is the mind got there through the senses. Locke was an empiricist who held that the mind was tabula rasa or a blank slate at birth to be written upon by sensory experience. Empiricism is opposed to rationalism or the view that mental ideas and knowledge exist in the mind prior to experience that there are abstract or innate ideas. George Berkeley argued against rationalism and materialism. He also criticized Locke on many points.

Don't use plagiarized sources. Get your custom essay on
“ John Locke’s Philosophy of Tabula Rasa ”
Get custom paper
NEW! smart matching with writer

He said most philosophers make an assumption that has no proof of the existence of matter. Berkley questioned the inference that material things cause our sensory experience or that our sensory experience is material things. Berkeley originally wondered if we as humans actually experience an object as it really was, or was what we physically saw. The materialist feels that the information received through sense experience gives a representative picture of the outside world and one cannot penetrate to the true essence of an object…

Although the idea is logical, it does contain certain grounding for agnosticism.

In a world in which there are no animals with color vision, there are still objects that reflect lights of various wavelengths, but there is no being that would interpret those waves as “color.

He supported his definition of primary qualities by claiming that if an object were continuously divided, the primary qualities would remain the same. However, he suggested that secondary qualities were only powers that the object has to cause us to have ideas about its color, smell, taste, sound etc.

According to Locke, there is no such thing as innate knowledge. Berkeley also shows that the perceived qualities of an object are ideas that exist only in a mind since sensations are the same as ideas; humans can only have one idea at once. On the other hand, God’s mind is infinite and is thus able to have multiple perceptions. These perceptions of God are also ideas, and it follows that these ideas comprise the reality beheld in the finite human mind.

Instead of the materialists’ belief in the representative theory of perception, where a material object has real qualities which humans perceive as sensible qualities. Locke had retained a certain faith in the capacity of the human mind to grasp, however imperfectly, the general outlines of an external world by means of combining operations. With Berkeley, there had been no necessary material basis for experience, though the mind had retained a certain independent spiritual power derived from God’s mind, and the world experienced by the mind derived its order from the same source.

Berkeley’s theory is that God upholds all of the ideas, which comprise human reality, and people perceive these ideas as sensations directly from God’s infinite mind. Berkeley also denied the existence of what are called abstract objects “universals” and “forms” or “ideas. ” For instance, if someone said that redness exists apart from any red thing or that goodness exists apart from any good action or person, then he is saying that redness and goodness exist as independent entities.

For Berkeley this is impossible, since nothing that is not being perceived can exist. The idea of redness without a red thing or goodness without a good action is a nonsense idea, every bit as much as matter without a sensation of it. Locke is an empiricist while Berkeley is an idealist, but Locke’s most significant idea is that the human mind begins as a blank slate (tabula rasa), which is written on thru the course of his or her experiences and education. He did raise important questions, and created a dialog that led to better theories. 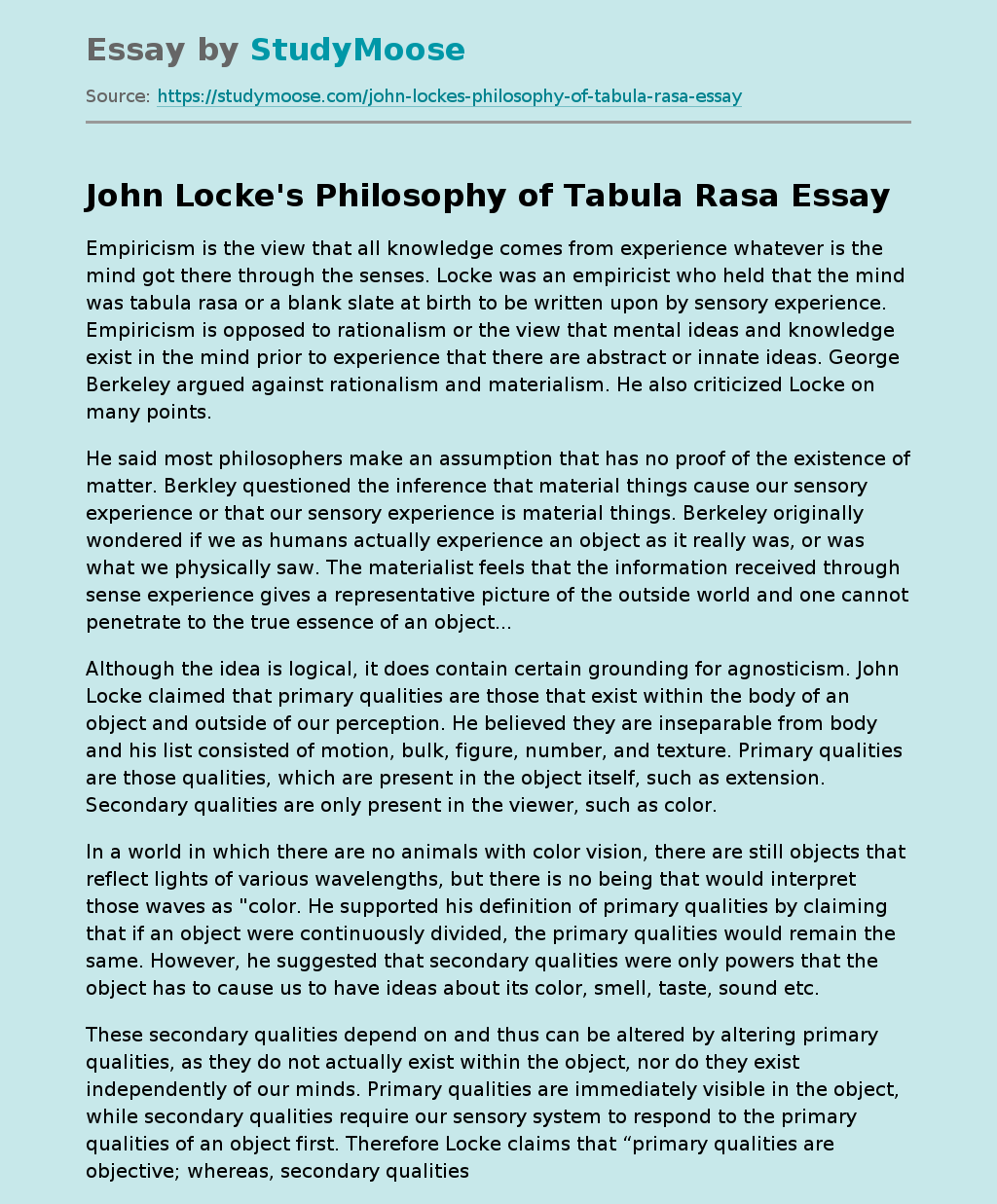