Jane Evans was spending a week at the Crown Point Ward girls camp. She and her friends were laughing and enjoying the crisp night air. They giggled and talked of crushes on boys and gossiped all night about the notorious girls at school. But the fun stopped when a rat bit one of the girls. Screaming, squirming and frightened, they worried and stayed awake for the remainder of the night. Unable to sleep, they decided to go indoors, to avoid another possiable attack.

Don't use plagiarized sources.
Get Your Custom Essay on Rationalism vs. Irrationalism Just from $13,9/Page

A rationalist would argue that this is a ridiculous reaction to a rat bite, however as a person with an irrational perspective, I plead the contrary and throughtout this essay, will demonstrate why. Through a rationalistic perspecive we observe the mind as active, the emotions passive, and the notion that no material thing can cause an nonmaterial idea; however from the viewpoint of irrationality I will prove that: 1) Emotion is in fact not passive and 2) Intelligence can be created materially.

Before going into detail on irrationalism I wish to explore the rationalistic perspective. The rationalist tends to believe in the existence of truths that could not be discovered through the senses alone, the world cannot be ascertained simply by experiencing the content of our minds. Advocates of some varieties of rationalism argued that, starting with basic principles, like the realm of geometry, one could deductively derive the rest of all possible knowledge. (Markie 1) The philosophers who held this view most clearly were Spinoza and Leibniz, whose attempts to understand the epistemological and metaphysical problems raised by Descartes led to the development of rationalism.

Both Spinoza and Leibniz asserted that, ideally, all knowledge (including scientific knowledge) could be gained through the use of reason alone, though they both observed that this was not possible in practice, except in specific areas such as mathematics. Which is perhaps why they depended on geometry and logic (a linguistic geometry) so significantly.

To Brentano, a rationalist, the mind is active, not passive as the British empiricists, and French sensationalists had believed. Rationalists alleged the mind as active and the emotions as passive. The rationalist belief in a more active mind meant that the mind acts on information from the senses and gives it meaning it would otherwise not have. (225) They argued that the mind added something to sensory data rather than just passively organizing and storing it into memory.

Having introduced rationalism I find it only appropriate that irrationalism should have a breif introduction of its history. Irrationalism was a philosophical movement which started as a cultural reaction against positivism in the early 20th century. The perspective of irrationalism opposed or de-emphasized the importance of the rationality of human beings. Part of the movements involved claims that science was inferior to intuition.

Rationalism, I find, is void of certain accuracy. The rationalist’s first assumption that truths can only be arrived at by such processes as logical deduction, analysis, argument, and intuition, is false. I wish to emphasize the notion that logical deduction, analysis, argument, and intuition are not to be brushed off lightly and given little importance. On the contrary they are in fact valuable, however only if they are employed with an emphasis on the irrational view of emotion. The rationalists assume that emotions are not necessary and truths can be reached by reason alone.

This is false. Although the girls in the beginning of the story experienced an emotional rat fright, they were able to use their logical reasoning and their emotional drive to come to a solution. Is it not through your emotions that you are moved to action? Without emotions the rationalists would not have come up with any logical theory in the first place! They would have had no drive to come up with another theory, no passion. I cannot imagine every rationalist unenthused in his work.

Through personal experience I have come to understand the importance of emotion. There have been occasions in my life that I over-rationalized. Reluctantly I’ll admit that perhaps it happens on more than just occasions, it is a constant burden to me and hinders my current and future relationships. My ex-boyfriend and I would get into an argument, as couples often do, and I would analyze the situation in my mind to attempt to come to a conclusion of how we achieved this particular position. How did I approach it; how did he? Was I overly critical and picky? Why did I respond in that way? Was it a past hurt? Could it be from my childhood when my favorite Hamster Gus-Gus died, and I felt personally hurt by God?

What about him, did he have the same amount of childhood damage as me; another hamster trauma perhaps? At this point I had analyzed the situation to such an extent that I couldn’t even remember what the argument was about in the first place. It was then that I realized that I needed to become an irrational being: irrational in the worlds respect anyway. I became an emotional person and therefore respectively irrational. This is often rejected in our society; emotions are largely frowned upon. A professor once mentioned the need for me to think less and feel more, and I decided that I should do just that; feel.

My second criticism of the rationalists is the notion that no material thing can cause a nonmaterial idea. Leibniz invites us to imagine a machine or human being capable of thinking (of having ideas). Then he asks us to imagine increasing the size of that machine to the point where we could enter it and look around. According to Leibniz, our exploration would yield only interacting, physical parts. Nothing we would see, whether examining the machine or a human being, could possibly explain the origin of an idea. (169) Because ideas cannot be created by anything physical like the brain; they must be innate.

The idea of producing an artificial sentient being is not new, infact it is an ancient idea and is featured in numerous myths, the Golem, the Greek promethean myth, mechanical men in Chrétien de Troyes, and the creature in Mary Shelley’s novel Frankenstein being examples. In science fiction, artificial conscious beings often take the form of robots or artificial intelligences. Artificial consciousness is an interesting philosophical problem because, with increased understanding of genetics, neuroscience and information processing, it is possible to create a conscious entity. The myths of writers and philosophers are no longer myths.

In order to avoid ambiguity and confusion I will define the term “artificial intelligence” based on the literal meanings of “artificial” and “intelligence”. According to Websters dictionary the term artificial refers to something which is not natural, often implying that it was created or manufactured by humans and intelligence is the capacitiy to reason, plan, solve problems, think abstractly, comprehend ideas and language, and learn. (Websters 3).

Throughout the past decade there has been a debate between strong AI and weak AI philosophers which tackles the question, ‘can a man-made artifact be conscious?’ This question involves philosophy of mind and the mind-body problem. In the philosophy of artificial intelligence, strong AI is the supposition that some forms of artificial intelligence can truly reason and solve problems; strong AI supposes that it is possible for machines to become sapient, or self-aware. (Markie 1) The term strong AI was originally coined by John Searle, who writes: “according to strong AI, the computer is not merely a tool in the study of the mind; rather, the appropriately programmed computer really is a mind.”

Artificial consciousness (AC), also known as machine consciousness (MC) or synthetic consciousness, is a field related to artificial intelligence and cognitive robotics whose aim is to define that which would have to be synthesized were consciousness to be found in an engineered artifact. AI systems are now in routine use in economics, medicine, engineering and the military, as well as being built into many common home computer software applications, traditional strategy games like computer chess and other video games. Through the rationalistic perspecive we observed the mind as active, the emotions passive, and the notion that no material thing can cause an nonmaterial idea; however from the viewpoint of irrationality I proved that: 1) Emotion is in fact not passive and 2) Intelligence indeed can be created materially through Artificial Intelligence.

4) Hergenhahn, B. R. An Introduction to the History to Psychology Belmont, CA: Transcendental Printing, 2005. 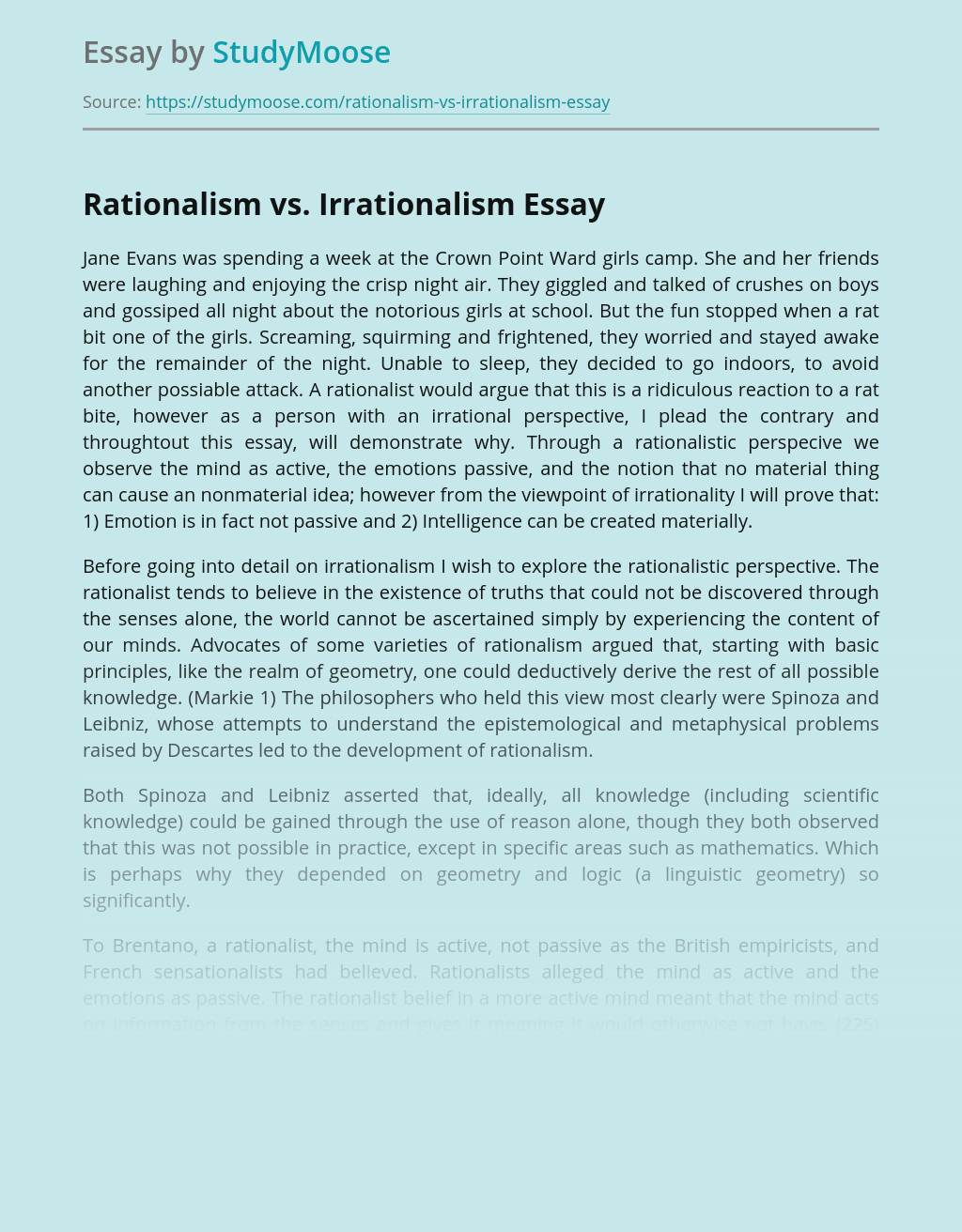 I have been a firsthand witness to teenagers drinking and have heard my share of stories. HA. One thing that is common in all of these stories is someone doing something stupid and illogical. For instance, engaging in unremembered sexual activities, guys getting into fights, and other activities along the lines. All of these reasons,...

View sample
Why the Rich Are Getting Richer and the Poor, Poorer

Robert B. Reich, Why the Rich Are Getting Richer and the Poor, Poorer Reich starts his exordium with a distribution of where American workers found themselves in the early 1990’s in reference to where almost all American workers were just 20 years before. Reich placed most of the workers that contributed to the economy during...

None of the proposed philosophical theories is exact, not even a combination of two or more theories (Sayre, 2011). However, Descartes has unique way of metaphysical argument concerning existence of God. Descartes’ Discourse on the Method (Part IV) ends surprisingly with a claim of God’s existence, which can be deduced from the interrelationship between mind,...