:What are the main differences between rationalism and empiricism as approaches to knowledge? Explain the advantages and disadvantages of each, using Descartes (Second Meditation) as the example of a rationalist, and Hume or Locke as the example of an empiricist. In your view which approach better explains the common-sense knowledge of the world that we take for granted? Common-sense knowledge is information we know and understand unproblematically. It could be that a spider has six legs, your two times tables or that in answering a multiple choice test, it is a good idea to bring a rubber and fill in your answers in pencil.

Don't use plagiarized sources. Get your custom essay on
“ Rationalism vs Empiricism ”
Get custom paper
NEW! smart matching with writer

It is information gained from ordinary life. Epistemology is a philosophical term in reference to the nature and limitations of knowledge. It addresses firstly what is knowledge, secondly how is knowledge acquired and thirdly the limitations of knowledge. Rationalism and empiricism are two approaches which seek to provide answers to these questions (Cottingham, 1988). Empiricism perceives that the development of concepts and ideas are dependent on the senses (Markie, 2008).

Alternatively rationalism ascertains that reasoning, intuition and deduction are the ultimate vehicles to acquiring knowledge, not sensory experience.

These theories do not necessarily exist in opposition of each other, but can co-exist to describe how one views the acquisition of knowledge in different fields (Markie, 2008). Throughout this essay, I will discuss the advantages and disadvantages of each view using Descartes’ ‘Second Meditation’ in contrast to Hume’s ‘Enquiry Concerning the Human Understanding’. I will then elaborate how the Empiricist perspective provides a better explanation to common sense knowledge of the world we live in.

Rationalism Rationalism is a method in which the criterion of the truth is not sensory but intellectual and deductive.

The rationalistic perspective survives on the assumption that firstly, there is a rational structure to the world and secondly, that people have the capacity to comprehend it. It utilises the deductive methods of logic to provide a model for all human knowledge and relies on intuition (Markie, 2008). This is not always the case, so this philosophy cannot be relied in all circumstances. Rationalism is founded on the thesis of Intuition/Deduction, thesis of Innate Knowledge or Innate Concept thesis separately or in some combination (Markie, 2008).

The Intuition/Deduction thesis proposes that in a particular subject area, some information is known by intuition alone or that knowledge is gained by deduction from intuited propositions. Experiences are incapable of developing one’s knowledge but can catalyse thinking causing knowledge to progress from unconsciousness to consciousness (Cottingham, 1988). The Innate Knowledge thesis asserts that some knowledge is inherent within humanity like DNA, as part of our rational nature. The Innate Concept theory is based on the assertion that some of our concepts are not gained from experience (Markie, 2008).

The rational nature organically possesses an individual’s concepts. Sense experiences might catalyse a process by which concepts are better understood but experience does not provide the concepts or determine the information they contain, rationality does (Markie, 2008). Other minor theories which are used less significantly to endorse Rationalism are the Indispensability of Reason Thesis and the Superiority of Reason Thesis. The Indispensability of Reason theorem states that we gain knowledge in a certain area when we utilise deduction and employ intuition.

The Innate concepts and instances could not have been gained through the sense experience. The second strain stems that knowledge gained “a priori” through reasoning is superior to that gained through experience (Markie, 2008). In reference to Descartes’ Second Meditation, he explains how rationality can be used to pick up information that is not completely provided by the senses through the example of the hats and coats (Descartes, 1984). Rationalism can provide knowledge which is otherwise unattainable “Something which I thought was seeing with my eyes is in fact solely grasped by the faculty of judgement which is my mind.

” Empiricism Empiricism is the other branch of epistemology, where knowledge is discovered through experience and observation, modelled on natural sciences. Knowledge is “a posteriori” catalysed by a sensory experience (Markie, 2008). Empiricism is not based on a definitive complete rational system of knowledge but does provide verifiable understandings and information, useful for everyday life (Hume, 1975). In David Hume’s piece “An enquiry concerning the human understanding and concerning the principals of morals”, Hume purports that the “…most lively thought is still inferior to the dullest sensation. ”

Hume interjects that thoughts and ideas are less lively perceptions in contrast to impressions where we are encouraged to feel, experience and will (Hume, 1975). He labours his point through the example of the man in a fit of rage, as opposed to someone thinking of espousing those feelings. Rationalism only recalls the information or experience. It is incomparable to the intensity from the original experience provided by empiricism. It might appear that thoughts are without the same restrictions the body possess (Hume, 1975).

In reality they have ‘narrowly confined limits with no more creative power than compounding, transposing, augmenting or diminishing the materials provided by the senses’. If a person is without the capacity of one of the senses, they are devoid of the information provided by that sense and are incapable of understanding information attached to that sensation (Hume, 1975). Restoring that sense enables them to receive sensory input, enabling them to conceive the attached ideas. This proves the importance of the sensory experience and that without it understanding is impossible.

Intuition and deduction, however relevant, are open to deception and can lead to inaccurate assumptions. People previously believed the earth was flat and the earth was the centre of the universe, as this “information” fit their current schemas. It made sense but lead to wrong conclusions as it lacked testing. It is through empirical observation that accurate insight was reached. Their rational thinking followed logical deduction and was believed to be correct due to their intuition, but even rational thinking can be fallible leading to wrong assumptions (Descartes, 1984).

It is proven that when people possess strongly held beliefs, they perceive information in such a way to support their current understanding and deny opposing views, filtering out information that does not fit their current schemas like putting blinkers on a horse. Although they believe their thoughts to be rational, their powers of deduction are compromised and can be rationally wrong. This significantly limits their ability to gain knowledge (Descartes, 1984). Conclusion Rationalism and Empiricism are two distinctly different views relating to epistemology and the degree of input that the senses provide in the formation of knowledge.

Rationalism through intuition, deduction and rational logic ascertains certain knowledge which perhaps cannot be scientifically proven through observation (Markie, 2008). On the other hand, Empiricism understands the role of sensory experience and observation in order to develop one’s knowledge. In reality, both are useful and even essential to the formation of any knowledge. References Cottingham, P (1988) The Rationalists, Oxford University Press. Oxford; New York Descartes, R. (1984) Meditations. 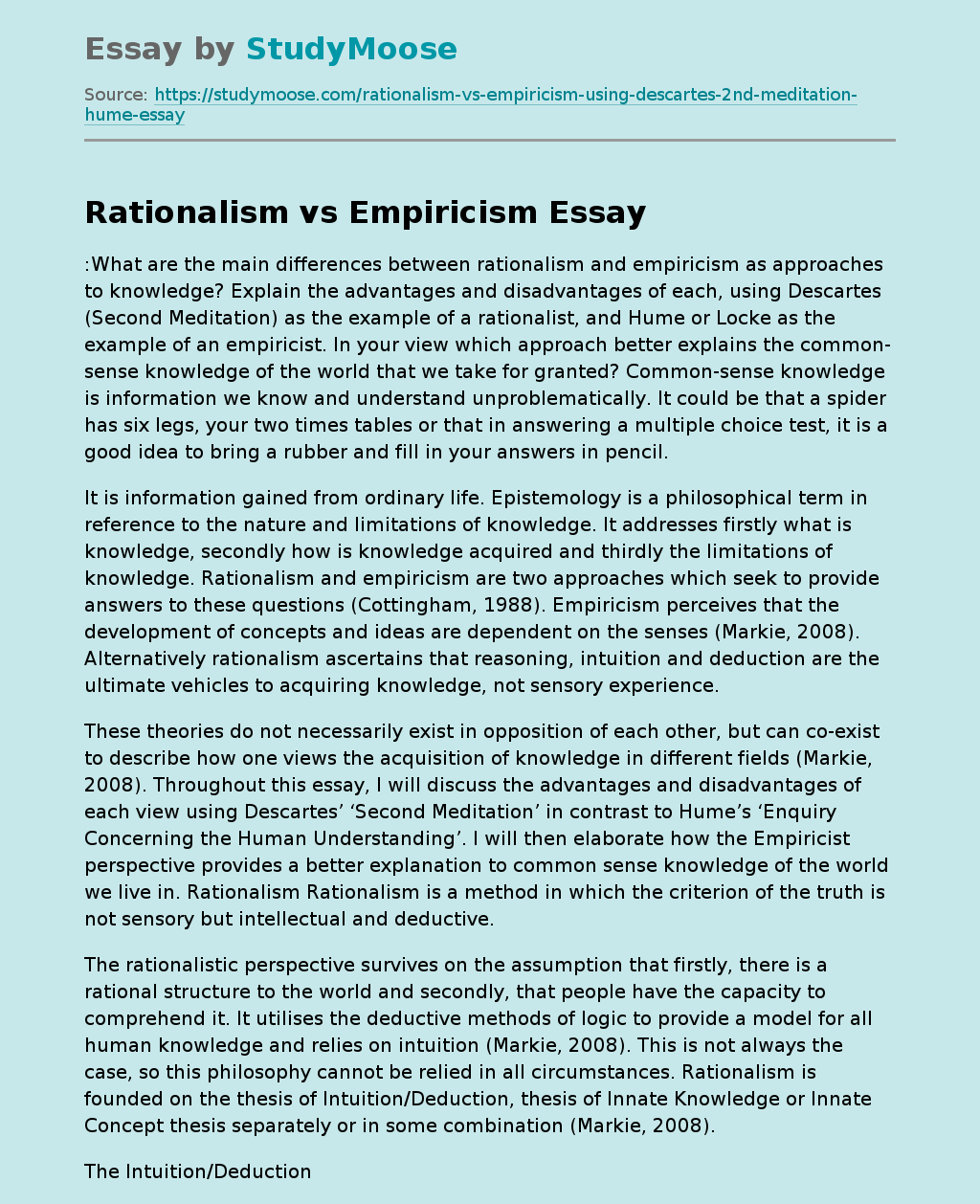