Social change refers to an alteration in the social order of a society. Social change may include changes in nature, social institutions, social behaviors, or social relations. The base of social change is change in the thought process in humans. Social change may refer to the notion of social progress or sociocultural evolution, the philosophical idea that society moves forward by dialectical or evolutionary means.

It may refer to a paradigmatic change in the socio-economic structure, for instance a shift away from feudalism and towards capitalism.

Don't use plagiarized sources.
Get Your Custom Essay on Social Changes Evolution Just from $13,9/Page

Accordingly it may also refer to social revolution, such as the Socialist revolution presented in Marxism, or to other social movements, such as Women’s suffrage or the Civil rights movement. Social change may be driven by cultural, religious, economic, scientific or technological forces. Social change (or Social development) is a general term which refers to change in the nature, the social institutions, the social behavior or the social relations of a society, community of people, or other social structures; any event or action that affects a group of individuals that have shared values or characteristics; acts of advocacy for the cause of changing society in a normative way.

Social change is a topic in sociology and social work, but also involves political science, economics, history, anthropology, and many other social sciences.

Among many forms of creating social change are direct action, protesting, advocacy, community organizing, community practice, revolution, and political activism. The term is used in the study of history, economies, and politics, and includes topics such as the success or failure of different political systems, globalization, democratization, development and economic growth. The term can encompass concepts as broad as revolution and paradigm shift, to narrow changes such as a particular social cause within small town government. The concept of social change implies observation and measurement of some characteristics of this group of individuals. While the term is usually applied to changes that are beneficial to society, it may result in negative side-effects or consequences that undermine or eliminate existing ways of life that are considered positive. Social change overall, however, has resulted in beneficial advances in human society, indicating that humankind is progressing toward a society that will allow all people to live in peace and prosperity.

The term social development of social change refers to qualitative changes in the structure and functioning of society that help society to better realize its aims and objectives. Development can be broadly defined in a manner applicable to all societies at all historical periods as an upward ascending movement featuring greater levels of energy, efficiency, quality, productivity, complexity, comprehension, creativity, mastery, enjoyment, and accomplishment. [1] Development is a process of social change, not merely a set of policies and programs instituted for some specific results. This process has been going on since the dawn of history. During the last five centuries it has picked up in speed and intensity and since the middle of the twentieth century there has been a marked surge in acceleration.[2] Economic development and human development need not mean the same thing. Strategies and policies aimed at greater growth may bring greater income to the country without bringing about an improvement in the living standards of the population.

This is what happened in the case of oil-producing Middle Eastern countries where a surge in oil prices boosted the national income of these countries without doing much good to the poorer sections of the people living there. Conversely people-oriented programs and policies can bring about an improvement in their health, education, living standards, and other quality of life measures without any special emphasis on monetary growth. The basic mechanism driving social change is increasing awareness leading to better organization. Life evolves by consciousness and consciousness in turn progresses by organization. When society senses new and better opportunities for progress it accordingly develops new forms of organization to exploit these new openings successfully. The new forms of organization are better able to harness the available social energies and skills and resources to use the opportunities to get the intended results.

Some social change is almost always occurring, but many different theories have attempted to explain significant social changes in history. These theories include (but are not limited to): the idea of decline or degeneration, or, in religious terms, the fall from an original state of grace, connected with theology; the idea of cyclical change, a pattern of subsequent and recurring phases of growth and decline, and the social cycles; the idea of continuous social progress;

Evolutionary theories (how one social form evolves into another), including social Darwinism; Theories of sociobiology Historical precedent shows that major social changes have taken place during “cusp” periods, defined by changing relations among human formations, nature, and technology. Some more specific theories of great social theorists are listed below: Eighteenth century

Smith believed that societies evolve through collections of individual preference, which take the form of an ‘invisible hand’ guiding society. This invisible hand is the collective preference of each individual in the society who express their preferences by purchasing the items of their choosing, which then guides production to meet the demands of the people.

Cantillon coined the term entrepreneur. He believed that entrepreneurs were important agents of social change as they are the most efficient re-arrangers of capital and can best meet the changing preferences of all the members in a society, thereby facilitating society wide change. Nineteenth century

Comte believed that human societies evolve along a three step evolutionary process. These stages are the theological, metaphysical, and scientific/positivistic. In the theological state, society members’ places were determined by God or their religion. In the metaphysical, the state and other large organizations assume control over man’s everyday affairs. In the final stage, science and reason reign supreme. Karl Marx

Marx wrote of a historical materialism. This theory was adopted from Hegel’s dialectical materialism. Marx argued that human history is seen as the clash between opposing dialectics. He changed Hegel’s philosophy to be more focused on the material world than abstract drivers of society. To Marx, the greatest historical clash was the conflict between workers and owners.

Spencer believed human society inevitably progressed because it responded to an ever-changing environment around it. The goal of this progress is happiness and prosperity. Spencer’s theory was based on a central tenet of human freedom, as he argued that social evolution could not be something forced on a people.

Tylor was an anthropologist who developed the theory that societies develop along a path from savage to barbarian to civilized. Savage cultures are based on hunting and gathering, barbaric cultures are nomadic or have rudimentary agriculture, and ‘civilized’ cultures have writing and feature urban life. Lewis H. Morgan

Morgan, like Edward Burnett Tylor, believed that civilization goes through three stages on the path towards ‘civilized society.’ Morgan’s stages were “hunter-gatherer,” “agriculture and metalwork,” and a third stage contingent on the development of the written word. Morgan also had a theory on the evolution of sexual relationships, with monogamy being the apex of this development.

Durkheim wrote that societies take one of two forms: mechanical or organic. In mechanical societies, members have little control over their own lives as the society’s “collective conscious” dominated every facet of life. In organic societies, individual priorities emerge. He believed societies progress from mechanical to organic through adoption of a division of labor.

Weber saw society as progressing on an unstoppable path towards scientific determinism in which man is increasing in his technical abilities, but not in his ability to understand the world. Weber believed this progress would result in a “polar night of icy darkness.”

Service developed a theory of cultural evolution in which societies develop from kinship-centric systems into law-based systems. Service’s theory posits that material inequality only arises with the development of these law-based systems whereas under the kinship societies, the only conflict was for power among different families.

Wallerstein developed “world systems theory” based on the idea that rather than “first,” “second,” and “third” world countries, there is in fact just one interconnected world. To Wallerstein, change occurs as competing factions within this world accumulate more capital. Process of emergence of new activities in society.

We can conceive of society as a complex fabric consisting of interrelated activities, systems, and organizations.[3] Development occurs when this complex fabric improves its own organization. That organizational improvement can take place simultaneously in several dimensions. Quantitative expansion in the volume of social activities Qualitative expansion in the content of all those elements that make up the social fabric. Geographic extension of the social fabric to bring more of the population under the cover of that fabric. 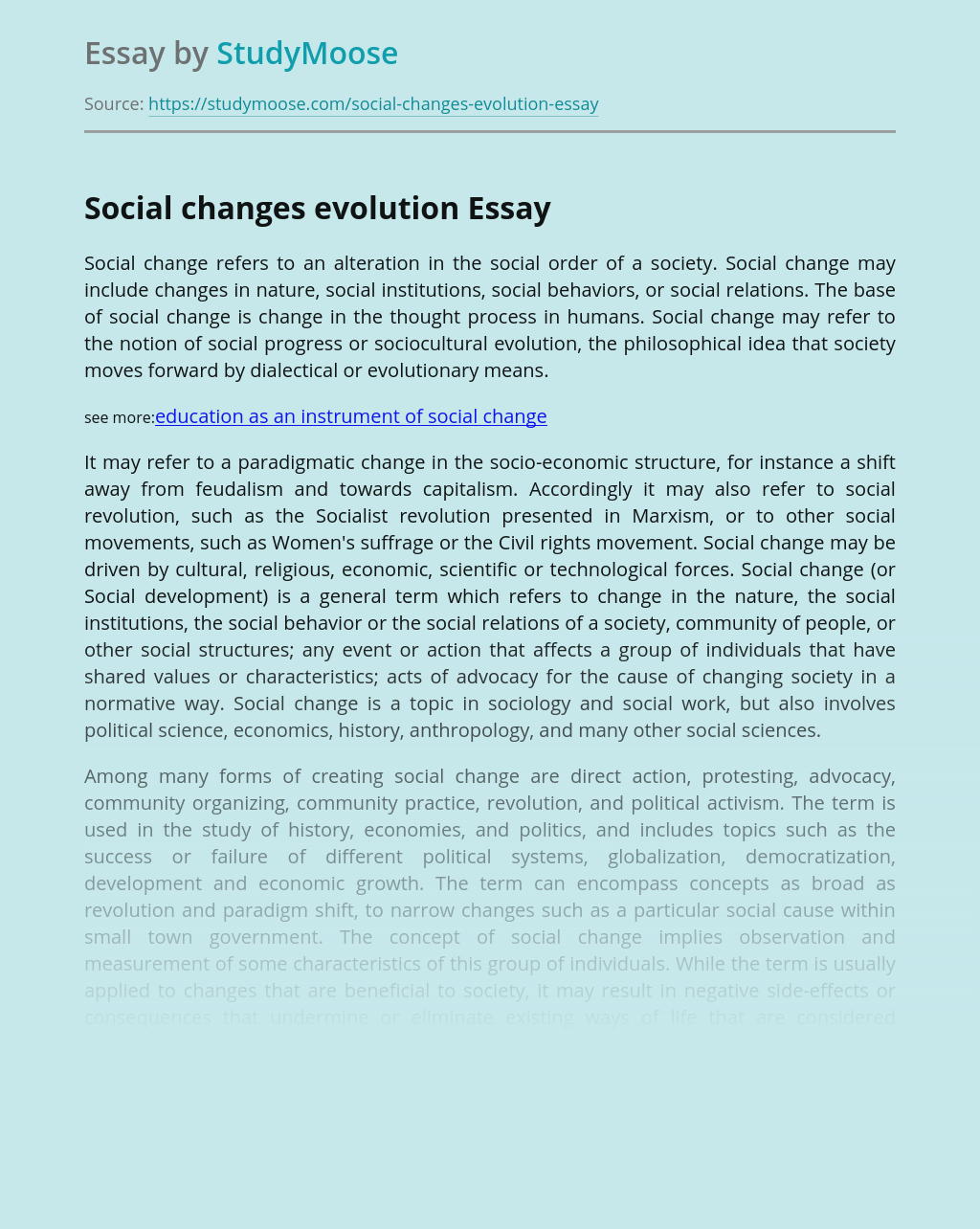 The Mughul empire was founded by in 1526, when he defeated Ibrahim lodhi,the last of the delhi sultans at he first battle of panipat. The mughuls were a powerful dynasty and left a profound impact on the thoughts and arts of the sub continent. This is a brief chronology documenting the time when the mughuls...

Egypt and Mesopotamia were the first river valley civilizations in 3500 B.C.E. They were both similar intellectually, because they both developed written language, and a similar alphabet. They were also similar religiously, because they both were polytheistic and believed their gods ruled them. Mesopotamia and Egypt were different with their achievements, because over time they...

Get Essay
Lord of the Flies Central Thematic Dichotomy

The style of the main thematic dichotomy in lord of the flies is conveyed through many ways through out the very first three chapters. The once majestic island has actually begun to appear as if it is only a mask for the real concealed “beastie.”. The apparently paradisiacal island is really comparable to the Garden...

Seven Ancient Wonders Of The World