In the age of technology, trends come and go almost instantaneously. The trend of the decade; Social Media. Ten years ago when someone thought of Social Media, he or she only thought about Myspace. Today, however, Myspace is an afterthought, and there are two new faces atop the Social Media world. These new faces are Facebook and Twitter. They may seem very similar but they are extraordinarily different in their overall structure, their friend/follower format and their communication layout.

Even though Facebook and Twitter are both set up to make it easier for people to communicate, they are structured much differently.

Facebook, on one hand, gives the operator the total ability to customize his/her wall. From favorite foods to relationship status, Facebook truly has it all. One can write a vague description of his or her life in the “about me” section or a detailed autobiography instead. After that, if one wants to tell what he/she is doing, he/she can write a post with no limits.

Facebook, without question, gives the user the ability to completely customize his/her page; whereas Twitter is set up in a much more basic format using a Twitter Feed. A twitter feed is basically a wall in the vaguest sense. The user can write a brief biography, which has a maximum amount of characters about oneself on the top of his/her page. Also one can “tweet” his/her thoughts, in limited characters as well, to depict what he/she is thinking.

In addition to the differences in structure, Facebook and Twitter also have different friend/follower formats. Essentially, Facebook and Twitter are set up differently in the way friends are made. Facebook is set up in such a way that one can find his or her friends and send a friend request, and if one’s friend accepts, the website lists that person in the user’s friends list. Once that person has friends, he or she can use a privacy setting where only the user’s friends can see his or her wall. In this way, Facebook lets users know what his/her friends are doing. On the other hand, Twitter is set up with the concept of followers. This means if one wants to add another user as a friend, all the user must do is click “follow”. Any user can follow another user which will allow him or her to see what that user is doing. Lastly, Facebook and Twitter have different communication setups. Both Facebook and Twitter allow users to send direct messages to friends, but both websites have different ways to communicate. Facebook allows users to post on another user’s wall to start a conversation. As well as using posts, one can also comment on a friend’s post. If a user is interested in one of his or her friend’s posts, the user can simply click the comment button to say what is on his/her mind. Twitter on the other hand, does not give its users as many ways to communicate. In addition to the already stated direct messaging Twitter only allows its users to tag their friends in a tweet to talk. If they do not want to direct message, they can publically message them. So in the communication aspect, Facebook definitely has the advantage.

On the surface, Facebook and Twitter seem alike but they are definitively different. Facebook and Twitter each have different structures, friend/follower formats, and communication layouts. Facebook is much more user friendly allowing its users to fully customize their walls and statuses in an unlimited amount of characters, giving the user complete control of their wall. Also, Facebook is much more private in the ability to accept a friend request which gives that user to view one’s profile. Twitter on the other hand has a much simpler layout with very little privacy. 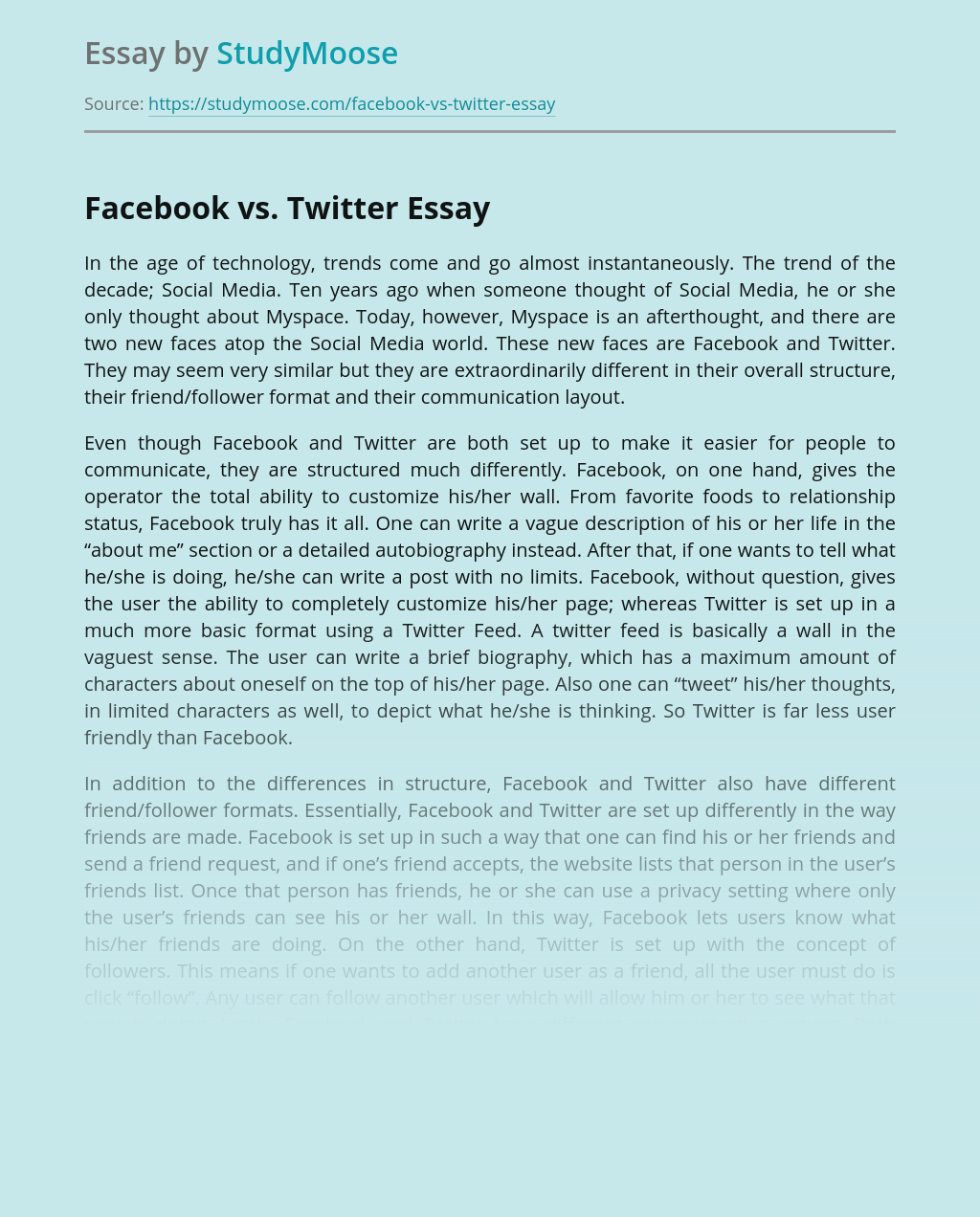