American actress Kate Bosworth once said, “I grew up in a small town where everyone wanted to be the same or look the same and was afraid to be different.” The controversy about big cities being better than small towns or vice versa to grow up in has been around for the longest time now. I strongly believe that small towns are a much better environment for a child to grow up in than that of a big city. Ask any person that grew up within a small town they probably knew everyone in their community perhaps even personally.

Don't use plagiarized sources. Get your custom essay on
“ Small Town vs. Big City ”
Get custom paper
NEW! smart matching with writer

If you knew the doctor well enough when you got sick he would come over and check out what is wrong instead of having to worsen the problem by going to them. Whenever you had needed something that you did not possess you could just borrow it from a neighbor or even someone you come across in town and return it at a later time.

Now living in a big city you could never find that tight sense of community you could in a small town. With thousands of people you would hardly know anybody there unlike a town of a few hundred where you know everyone and they know you. With the number of people in mind that brings me to my next argument, the peace and quiet of a small town.

There are no taxi cabs honking at each other and people getting into petty arguments in the center of town attracting unwanted attention.

In small towns you will find none of this just the sound of the occasional car driving past your house or neighbors having small talk with one each another. Usually in big cities when people argue they use profanity and I do not think that is a good environment for a child to grow up in neither should you. Living in a small town would have little to no stress unlike a big city with all the noise.

My last and final argument is small towns are safer from violence and the influence of gangs. Studies have shown that 1.6% of teenagers have joined gangs a large part of this percentage is in big cities for example Chicago. Small town life would never even put the thought of joining a gang or even causing violence within the community. Stress of teenagers in big cities cause teens to fight each other while in small towns there is hardly any stress. So this in other means hardly having violence in their school along with town which for parents is very good.

Once again as I stated earlier in my opinion I believe that small towns are better to grow up in than big cities. Small towns have a very close knitted community almost like family, it is peaceful leaving the loud distracting noises for the big cities and the community is safer from violence and gang related problems.

If you want a good environment for your family then a small town is the best bet unlike a big city where they would be in the worst environment possible especially for children. The bottom line is the best choice is the small town for growing up and the safety of your child. 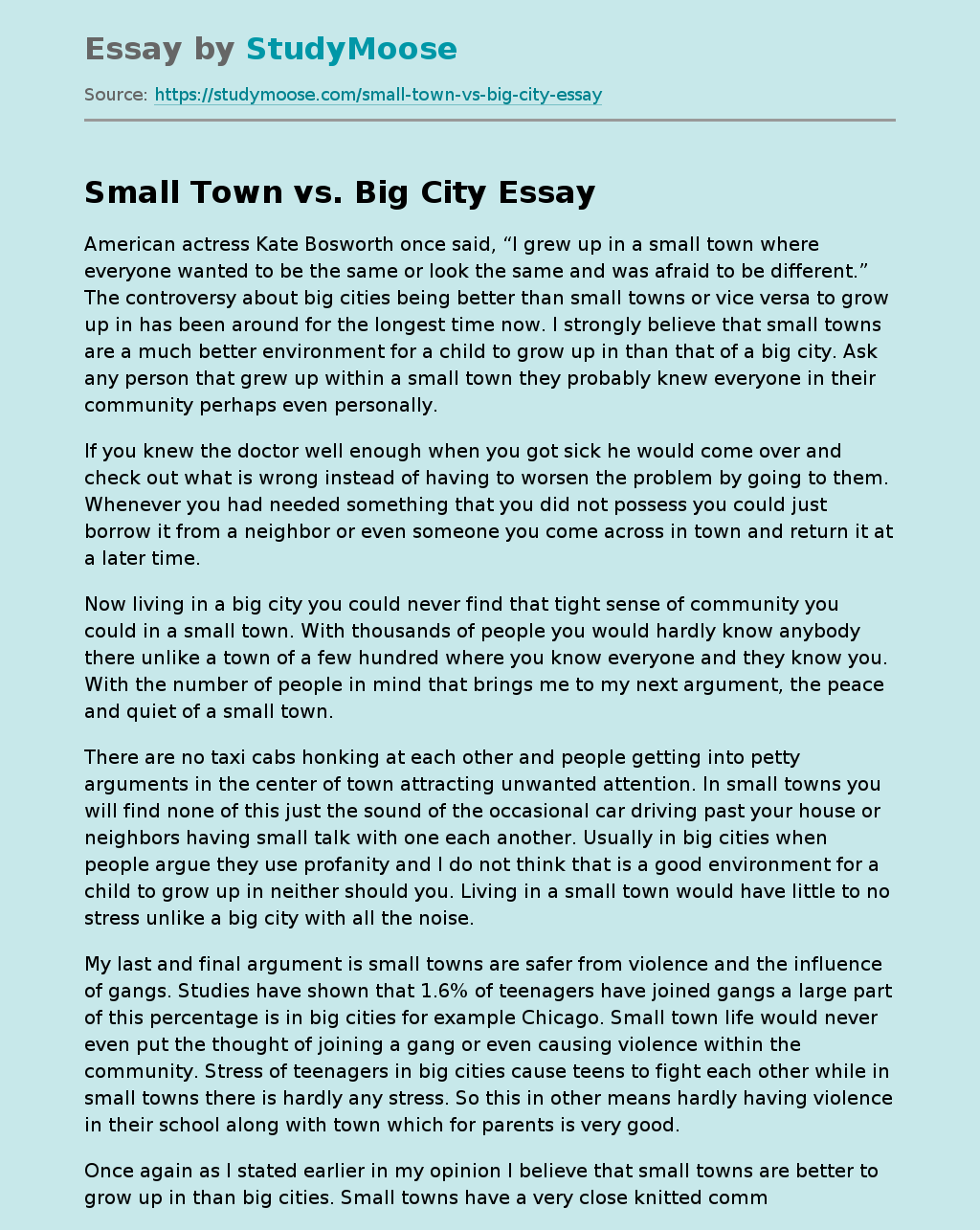