Our Town vs. Steel Magnolias

To the casual observer, Our Town, the theatrical piece by Thornton Wilder, is very different from the cinematic production entitled Steel Magnolias (based on Robert Harling’s original stage play). Due to their differences in setting, characters, and mood, it can be difficult to see the obvious parallels. A more in-depth look at both pieces reveals many similarities in different areas, such as daily life, love, marriage, and death.

Despite the fact that Our Town takes place between 1901 and 1913 and Steel Magnolias is set in the late 1980s, an average day in Grover’s Corners is much like one in Chinquapin.

Don't use plagiarized sources.
Get Your Custom Essay on Our Town vs. Steel Magnolias Just from $13,9/Page

Both of these fictional cities demonstrate small-town life. On an ordinary day, in both cities, the newsboys make their morning rounds delivering the daily newspapers to the townspeople. In Chinquapin, the delivery man distributes parcels to their recipients, while the milkman in Grover’s Corners delivers his goods. A skirmish between George and Rebecca Gibbs corresponds to that of Shelby’s brothers, Jonathon and Tommy.

This pair of presentational life dramas is alike in relation to love and marriage as well as daily life. Both stories, as a result of love, have wedding components. In both weddings, the grooms feel nervous about their futures. They are overcome by potential feelings of sorrow and abundant happiness. Both of the men want to see their brides on the day of the wedding, and are told that it is bad luck to do so. The parents also demonstrate “cold feet” by showing that they, too are nervous not only for their children, but also for themselves and the part of their lives that their children occupy.

The final way in which these pieces are alike is the most important and profound way. It pertains to life and death, and is expressed in both instances. Both Shelby and Emily die in childbirth, and are succeeded by their husbands, parents, and one child. Though both Our Town and Steel Magnolias are alike in the aforementioned ways, this is also where they differ greatly. It is here that the “aura” or mood differs. In Our Town, the tone is sorrowful and shows despair that Emily didn’t stop to notice things she should have. Steel Magnolias did not have what I would describe as a “happy ending,” but it does give a positive outlook with a “life goes on” message.

In spite of the differences that are obvious between these performance pieces, they are undoubtedly alike in many ways. With the elements of daily life being as they are, the morning commotion and behavior of siblings, each resembling its counterpart, it is safe to say that both authors thought of the same thing when they thought of “small town life.” The substance of the stories that relate to love and marriage are also like each other, which is no surprise, because it is expected that the bride, groom, and parents are nervous when being part of such a large decision.

Also the part death played had a lot to do with the lesson or message that was to be conveyed by these stories. Both of the wives dieing young and leaving behind almost all of their families, especially their children, which are an important factor in the deep-seated message from the authors, shows the value of life and abstruse value of people and nature. For Our Town this message can be simply stated as “you’ve got to love life to have life, and you’ve got to have life to love life.” Steel Magnolias moral can be expressed by saying that life should be enjoyed while it can, and when it can’t, life goes on.

Our Town vs. Steel Magnolias. (2016, Jul 18). Retrieved from https://studymoose.com/our-town-vs-steel-magnolias-essay 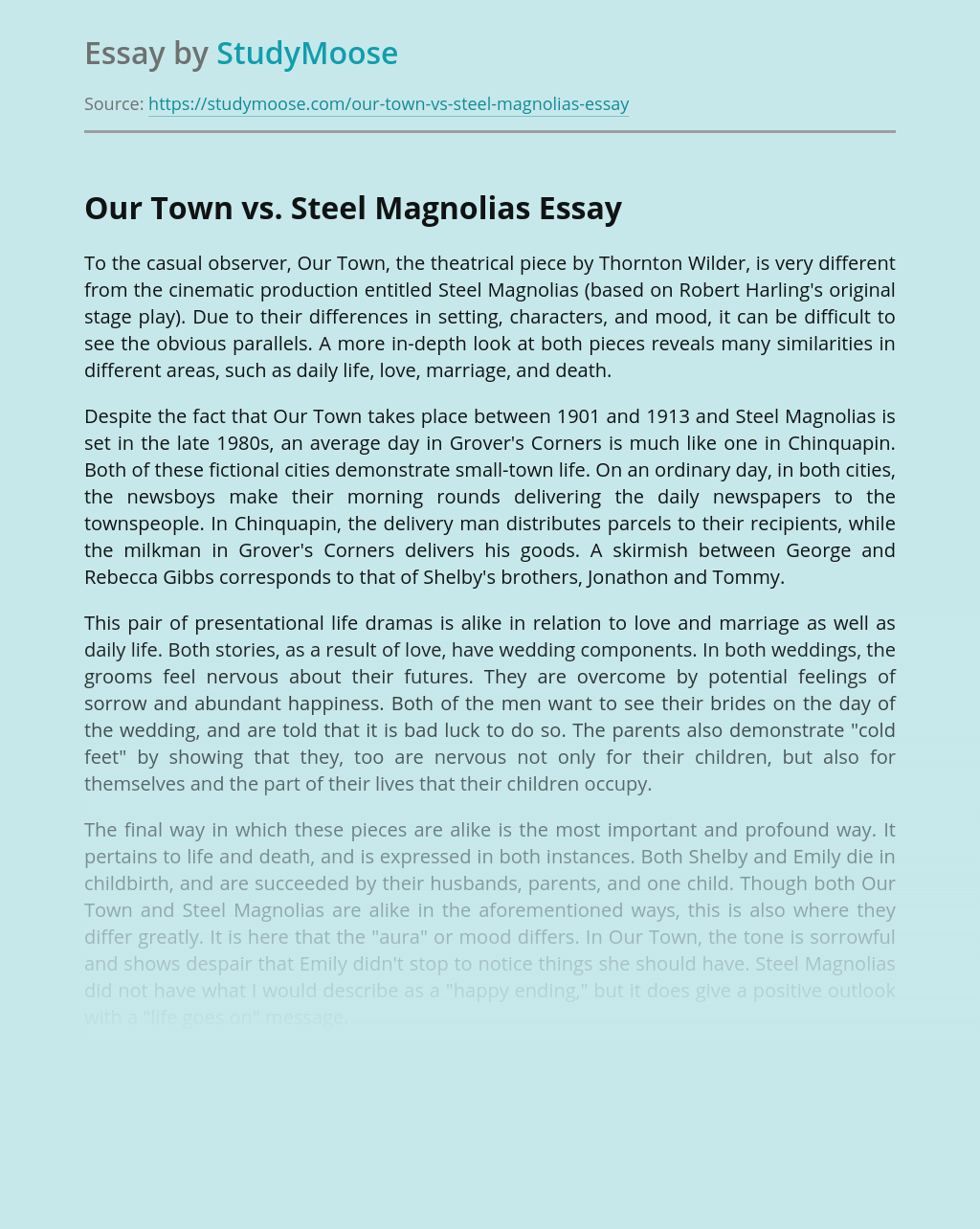 As the director of this precise production, my idea and vision for the 21st century version of “The Seven Ages of Man” is to a certain extent, altered. There is a merely different scene, so I want to set it where it rather emulates the poem. Though it cannot befuddle the audience’s attention away from...

View sample
Death of a Salesman by Arthur Miller

After reading the play, I think that there are many feelings evoked towards Linda. There is pity and sympathy and some resentment at her denying Willy the chance to work in Alaska. She is a hard-working wife and loving mother. One could blame her for Willy’s suicide but this would be harsh, as she feels...

The bulk of David Mamet’s critics give great focus or attention on the negative concepts and views of power, such as repression and exploitation. Mainly, this happens in the analysis of the associations of power in business world in “Glengarry Glen Ross” (1983 ). A point of view that will be thought about in this...

Macbeth by Shakespeare tells the tale of a great soldier, who is prophesized to become the king of Scotland upon meeting three witches, commits regicide and a chain of crimes, which led to his own tragic demise. The supernatural dominates all aspects of the play of Macbeth. The actions of Macbeth are influenced by his...