In Shakespeare’s Romeo and Juliet, the theme of love is predominant throughout the entire play. There are multiple concepts of love displayed through the relationships of different characters. Unrequited love and lust is discussed in regards towards Romeo’s love with Rosaline. Familial love is prevalent from characters in both the Montague and the Capulet family and is an underlying theme that is so important in foreseeing the future of the “star crossed lovers. ” Brotherly love is demonstrated by the way in which characters would sacrifice their life or reputation for a friend.

Don't use plagiarized sources. Get your custom essay on
“ Romeo and Juliet: multiple concepts of love ”
Get custom paper
NEW! smart matching with writer

The theme of unrequited love and lust is shown through Romeo’s unreciprocated affections for Rosaline. In the beginning of the play, Romeo spends most of his spare time sighing over his depressing and virtually non-existent love. Romeo emphasises his love for Rosaline throughout the repetition of the word “beauty” however fails to mention his appreciation for Rosaline as a person. He has a false interpretation of love towards Rosaline as “she is rich in beauty” and thus only fancies her for her physical appearance.

Another example of this is Lady Capulet’s disposition of love solely through physical looks and as a materialistic property. When trying to convince Juliet to marry the honourable Paris she speaks favourably of his young, handsome face; “delight writ there with beauty’s pen. ” As the audience, we can say that the love between Romeo and Juliet began out as lust, however evolved into romantic love. Instead of saying that Romeo and Juliet fell in love at first sight, we can say that they fell in lust at first sight.

Lust and unrequited love are only two of the many types of love shown throughout the play. Familial love is demonstrated by both the Capulets and the Montagues. When Capulet is discussing his daughter with her newly proposed husband, he exemplifies his fatherly love for her when he calls her the “hopeful lady of [his] earth. ” He exposes his concern for her wellbeing when he states that she is only “a stranger in the world. ” Lady Montague dies due to separation from her son “Alas, my liege, my wife is dead to-night; / Grief of my son’s exile hath stopp’d her breath.

” Even though it isn’t prevalent throughout the play, Capulet, Montague and Lady Capulet also really cared for either Romeo or Juliet and loved them. Lady Capulet may not have been a great motherly figure towards Juliet; however she cared for her daughter dearly. When she sees the body of her daughter, she cries “O me! This sight of death is as a bell, / That warns my old age to a sepulchre. ” The sight of death makes her feel out of place considering that the young are dead, while she, who is old, lives on.

Familial love isn’t as prevalent throughout the play in comparison to the other types of love, however is equally as important. Brotherly love is noticeably important throughout the novel. An example of this is the relationship between the Friar and Romeo. The Friar is almost parent like towards Romeo and considers his as a pupil. He knows everything about him and they trust each other. When Romeo has been “banished” from Verona, the Friar offers guidance to make the best of the situation and promised that he would keep in touch with him about the plans of escaping to Mantua with Juliet.

This gives Romeo a sense hope that he can finally be reunited with his lover. The Friar looks after Romeo as though he was his own son and shows that even though is his very religious, he can still be capable of sin and dishonesty. Brotherly love is also demonstrated by the relationship between Mercutio and Romeo. Mercutio is the Prince’s kinsman but also Romeo’s friend and confidant. He is concerned for Romeo and for peace between the families. Mercutio is the first to see that Romeo is in love with the daughter of “[his] only enemy”.

He expresses his concern to Romeo, however Romeo dismisses him as love has already overcome his and controls all of his thoughts and actions. We see the love that Mercutio has for Romeo when he fights Tybalt on behalf of Romeo. It is after his death, the Romeo realizes the consequences of his love affair and the impact it had on his friendship with Mercutio. Mercutio foreshadows the devastating events and serves Romeo as a friend and a brother like figure. The friendship between the characters is so strong, that sometimes they do something because of love, but don’t realize the negative consequences that will arise from it.

In the romantic tragedy of Romeo and Juliet, many concepts of love are presented. Each character throughout the play defines love as something different; Paris and Lady Capulet believe that love is to do with appearance, while Romeo believes that love is only pain and at the beginning Juliet didn’t even known the definition of true love. Shakespeare displays to the audience that the only type of love worth being in is “true love. ” He also demonstrates to us, that with all forms of love comes pain. 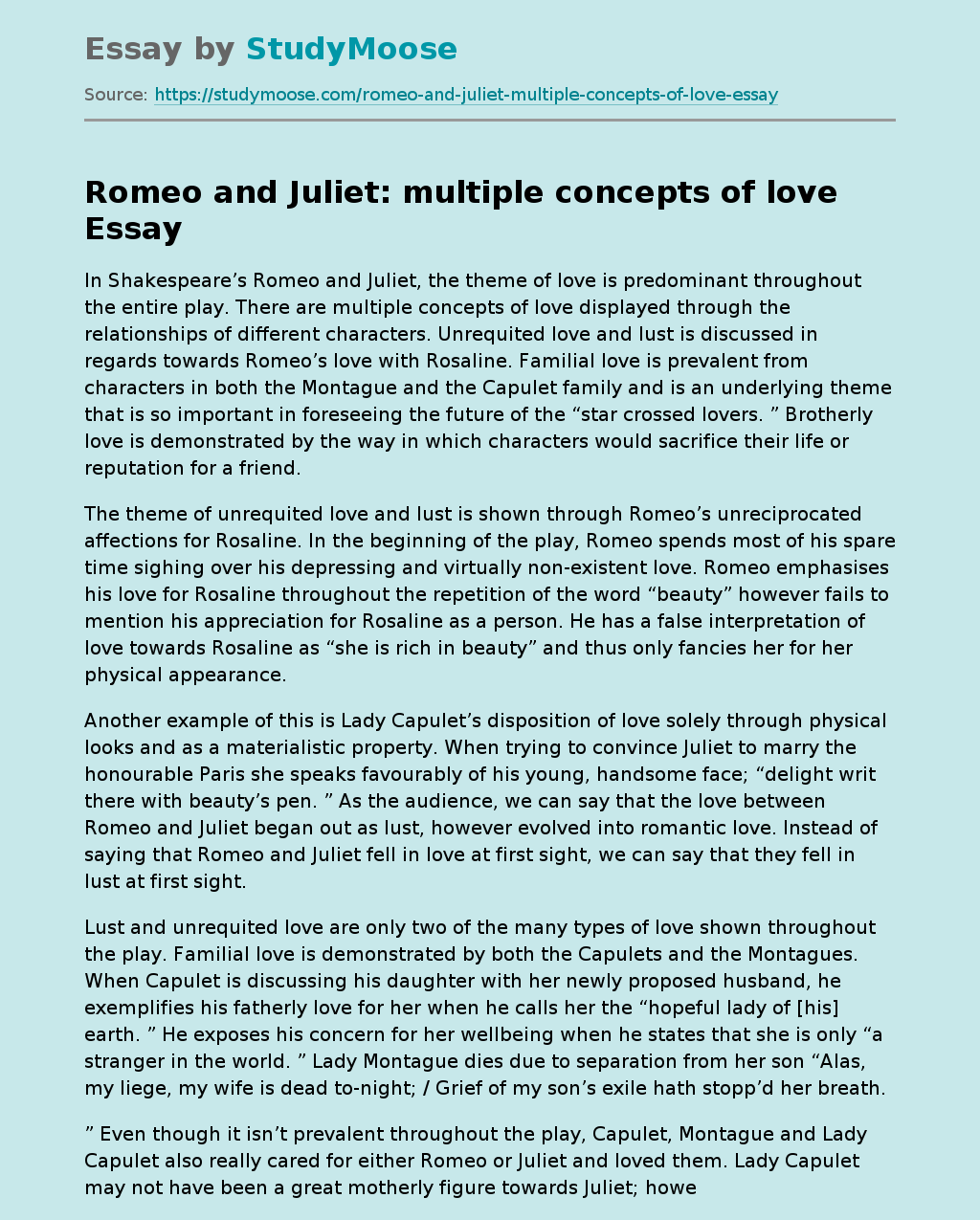