In 1597 a play titled Romeo & Juliet was published. The writer, William Shakespeare, Had not even an inkling that this play (and many of his other works) would have such and impact on writers all over the world. Romeo & Juliet has been interpreted many times and many ways. There are two popular movies that are both appropriately titled Romeo & Juliet. In 1968 and 1996 movies were created by directors Zefferelli (1968), and Baz Luhrmann (1996). Theses movies ,along with the original text version, portray the story of Romeo & Juliet very differently while still staying true to the main plot.

The Story of Romeo and Juliet is known worldwide, It has endured time and is understood throughout all ages. In each piece they use religious imagery to represent the strong and everlasting love between Romeo and Juliet. In each version of the story the characters, overall plot, language, and prologue typically stay the same. Although they are very different in content they all acknowledge how important the prologue, first meeting, balcony scene, and death scenes are.

The Play Romeo & Juliet has a prologue that explains what is going to happen in the play. Basically giving away the story or telling the viewers what to expect. It is given by a chorus in the play, but in Zefferelli’s 1968 version, the prologue is spoken by a male voice while the beginning credits scroll on the screen. The screen has a soft focus with a panoramic view of the Italian countryside. In the 1996 Baz Luhrmann version, The Prologue is given twice.

Once as a newscast, and again with images from the movie flashing on the screen. This prologue is very fast paced, frantic, and again incorporates strong religious imagery. The Modern version of the prologue is most effective at giving a complete understanding of what is going to happen in the play The prologue is a very important party of the story along with the first time Romeo and Juliet meet.

When Romeo and Juliet first meet they are at the Capulet ball. In all three versions everyone is in costume. In the modern version Juliet is dressed as an angel and Romeo as a Knight. They first spot each other while Juliet is dancing with Paris. Whom Romeo refers to as a “Knight”. The whole time Juliet is dancing with Paris she keeps eye contact with Romeo. In the 1996 version Romeo and Juliet’s first kiss is in an elevator. Zefferelli’s version has their first kiss behind a curtain. This scene is best displayed by the modern version because is shows how important and mystifying their first encounter is.

The balcony scene is the scene that the play is famous for. It is a romantic, whimsical, love encounter. In the text, 1968, and 1996 versions, Romeo is coming from the party, he climbs Juliet’s orchard wall that is in front of her balcony, and recites a soliloquy before ever saying a word to Juliet. In the modernized version there is no prologue to this scene and Juliet is actually never in the balcony. While Romeo is speaking to her lit window, she is actually coming out of an elevator to the pool area where Romeo is located. They both end up soaking wet in the pool. In this version it has a humorous twist to it. The 1968 version depicts this scene very well because it shows how deeply Romeo and Juliet are in love. They are very physical and emotional with each other.

Many deaths occur in this play. Two of the major ones (aside from Romeo and Juliet) transpire in the Fight scene. First between Mercutio and Tybalt. Then again with Tybalt and Romeo. In the text and Zefferelli versions the fight between Mercutio and Tybalt begins as a playful swordfight. Then is escalades when Romeo comes and tries to stop the fight. He does this because he is married to Juliet by now and Mercutio is his loyal friend and Tybalt is now his family. Mercutio gets stabbed and killed. The Romeo decides to fight and kill Tybalt. The tone of the play changes to a very dramatic tone when Mercutio dies and Romeo and Tybalt fight. In the 1996 version all of the fight are serious and the atmosphere changes from light to dark when Romeo and Tybalt fight. Instead of being stabbed Tybalt is shot. This scene is best displayed by the 1968 version because its atmosphere is the same as the original text which means it is the way that Shakespeare would have wanted it.

When Romeo and Juliet die it is the most emotional part of the play. First Juliet conjures a plan with Friar Lawrence to enable her to be Romeo and not have to marry Paris. Balthasar delivers a false message to Romeo causing him to come and see Juliet. When he arrives he finds Juliet in the Capulet tomb “dead”. He purchased poison from the Apothecary preceding his arrival at the tomb. When he found Juliet he took the poison believing there was no reason to live. When Juliet awoke she found Romeo dead beside her and then killed herself. In the text version Romeo arrives at the tomb and Paris is there so he has a brawl with him then kills him.

In the 1968 and 1996 versions Paris is not in this scene at all. Juliet is awaking from her “sleep” just as Romeo takes the poison in the 1996 version. Juliet and Romeo exchanged no words in the text and 1968 versions but in the Luhrmann version, the only lines they have, they did exchange them with each other. In this version Juliet shoots herself with Romeo’s gun. The other versions have Juliet stab herself with Romeo’s Dagger. The modern version presents this scene very well. It has a great deal of religious imagery representing their love as they die for each other.

While staying true to the main story and plot, the director is still able to incorporate his imagination and put his own creative spin on it. The movies and text are all very different but they remain loyal to the original story and plot. Romeo & Juliet is a tragedy that everyone understands. It inserts many valuable concepts into anyone’s everyday life. These directors interpreted the story of Romeo & Juliet in their own creative way while still enabling the viewers to understand where the inspiration for these movies originated. 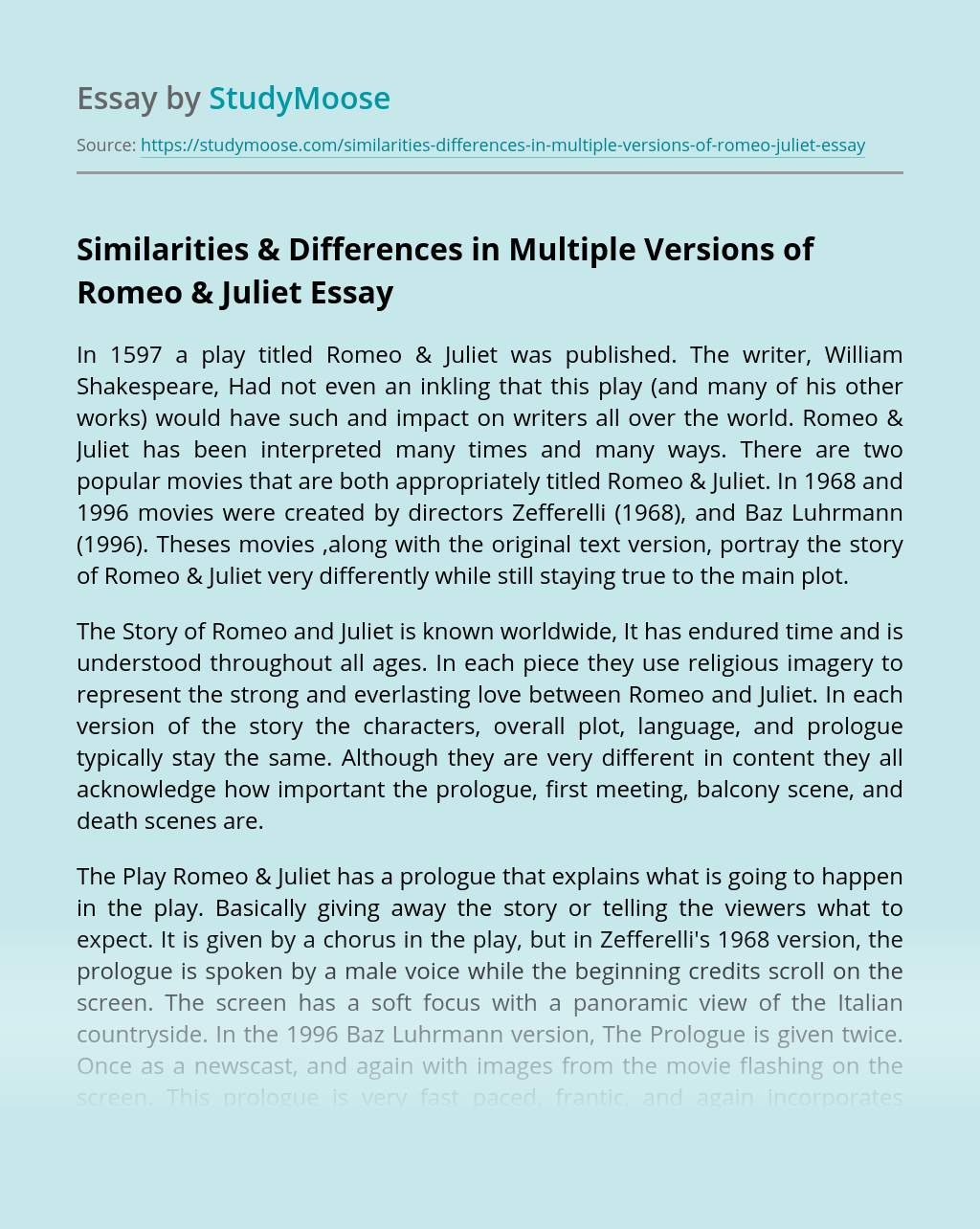 Part1: Directorial Vision Statement The piece that I selected for this formal treatment is Romeo and Juliet by William Shakespeare. I select this for a couple of reasons that are listed as the following. First of all, Romeo and Juliet is so famous and popular all around the world, and the two main characters—Romeo and...

The tragedy ‘Romeo and Juliet’ was first produced around 1595, since when it has been one of William Shakespeare’s most popular plays. Taking place in Verona, Italy, it is set against the background of a constant feud between two rival families, the Capulets and the Montagues. At a party at the Capulet’s house, one of...

Get Essay
Difference between diegetic and non-diegetic sound

Romeo and Juliet Analysis of Act 1

William Shakespeare introduces the story of Romeo and Juliet by using a prologue. The function of the prologue is to explain the situation, setting the scene in Verona and the quarrel between the families is old, ‘ancient grudge’. The prologue informs the audience that the lovers are ‘star-cross’d’ and that their death ends the feud...

Lord Capulet and Lady Capulet in 'Romeo and Juliet'

In this scene Lord Capulet and Lady Capulet explain to Juliet that she must marry Paris in a few days time. Clearly, Juliet does not want to do this. This is clearly an extremely tense and emotional time, perhaps for different reasons for all the characters on stage. Lord Capulet is making important decisions regarding...

Dramatic Features of the Text "Romeo and Juliet" by Shakespeare

In “Romeo and Juliet”, Shakespeare uses various means to make the first meeting of Romeo and Juliet as powerful on stage as possible. The play begins with a prologue, which on its own is not very significant. However, with a prophecy of “star crossed lovers” undertaking a “fearful passage of their death-marked love”, an atmosphere...