Don't use plagiarized sources. Get your custom essay on
“ “Romeo and Juliet” by William Shakespeare and “Romeo+Juliet” by Baz Luhrmann ”
Get custom paper
NEW! smart matching with writer

He appropriated the text to fit into the world of love and violence that Luhrmann has created.

Shakespeare’s Romeo and Juliet is set in the small renaissance Italian city of Verona Italy, in 17th century. In that time men had power over women, and they were seen as being superior. In Shakespeare’s play, men played the roles of the men as well as the women. The society back then was seen as being patriarchal they believe in magic, fate and destiny.

This was reflected in the prologue where phrases such as “star-crossed lovers” and “death marked love” are used to show the love the two main characters have for each other, and also to show that their fate lies both in love and death. Theatre was performed differently during Shakespeare’s time. They had fewer props, and did not have as many sound effects. Shakespeare uses a classical orchestra. The audience then still found the play interesting. The costumes used was one of the ways to make the play more interesting, they reflected the gender of the character being played, which were always played by men.

Shakespeare’s prologue is read by a chorus, which explains the situation, and tells us that we are in Verona.” Two households, both alike in dignity” this tells us that the two families are both well-off and of high importance. “A pair of star-crossed lovers take their life,” this tells us that the ill-fated lovers (Romeo and Juliet) will in the end die. The prologue tells the audience that the death of these two lovers has been caused by the feuding between their families, and that this feuding could not be stopped until the death of their children. “If you with patient ears attend, what here shall miss, our toil shall strive to mend” this quote from the prologue states that the rest of the story which has not been told in the prologue yet will be told in the play which is still yet to unfold.

Romeo and Juliet was written during the 17th century and the language and style is Elizabethan. Verona Beach California. Luhrmann’s society was much different, it was about the corruption and violence, and it is shown greatly in the prologue for example it shows the police with guns also you can hear gun shots, it shows the new paper articles of the parents feuds and how they dislike each other. Luhrmann still has stuck to Shakespeare’s theme of hatred, pain and suffering. Luhrmann has also used music very effectively in the prologue he has used orchestral music to make the scene much more powerful. Today the language is seen as weird to a young audience, but through the transformation into film better understanding is gained through film techniques and the visual aspects such a more modern setting.

This has been shown in the prologue. The setting begins with a small television in the centre of a black screen. This is the modern substitute of the chorus. It is the current technology to receive information. Static is also seen on the screen and a newsreader delivers the same prologue. The background behind the reader reveals two cracked wedding rings, symbolising the death of the married couple, Romeo and Juliet. Fore grounded are the words “Star crossed lovers”, suggesting to the responder that the two killed were ‘fated’ to be together and die. The violent society and the hatred of the two families are also reinforced as newspaper reporting the ‘feud’ is revealed. The audience can understand the story better with dramatic imagery used in the prologue, because Luhrmann has transformed it so that a modern audience will understand it.

Baz Luhrmann has transformed the ball scene into a fancy dress party scene, which is where Romeo and Juliet first meet. Mercutio convinced him to go to a Capulet ball, which is where he met Juliet, and they kissed “you kiss by the book”. Baz Luhrmann has recreated the ball scene into a dress up party, using techniques such as camera angles, costumes and music. The costumes that Luhrmann used to transform the play created a more exciting film, but still using the original Shakespearean language. The costumes that the characters wore in the party scene represented their personality and relationships. For example, Juliet is dressed as an angel because she is of high power, and she is referred to as angelic throughout the film.

Lord Capulet is dressed as Julius Caesar because he is in charge and shows that he has power. Romeo is dressed as a knight, because he is brave and courageous, and he is Juliet’s “knight in shining armour”. Tybalt is dressed as a devil, which shows him as being threatening and the “bad guy”. The music Baz Luhrmann used in this scene was the upbeat song “Young Hearts Run Free”, played when Mercutio who was dancing, and dressed as a drag queen. This song gave the scene a happy, party mood. When Romeo and Juliet first saw each other, through the fish tank, the soft, slow song “Kissing You” was played, which gives a romantic mood. Luhrmann has transformed the classic ballroom scene into a modern party scene, which has made it much more appealing and fun.

Baz Luhrmann has transformed Romeo and Juliet by modernising the context, setting, costume, music, language and themes, which have been appropriated for today’s audience and for them to understand and enjoy the film.

"Romeo and Juliet" by William Shakespeare and "Romeo+Juliet" by Baz Luhrmann. (2016, Jul 30). Retrieved from https://studymoose.com/romeo-and-juliet-by-william-shakespeare-and-romeojuliet-by-baz-luhrmann-essay 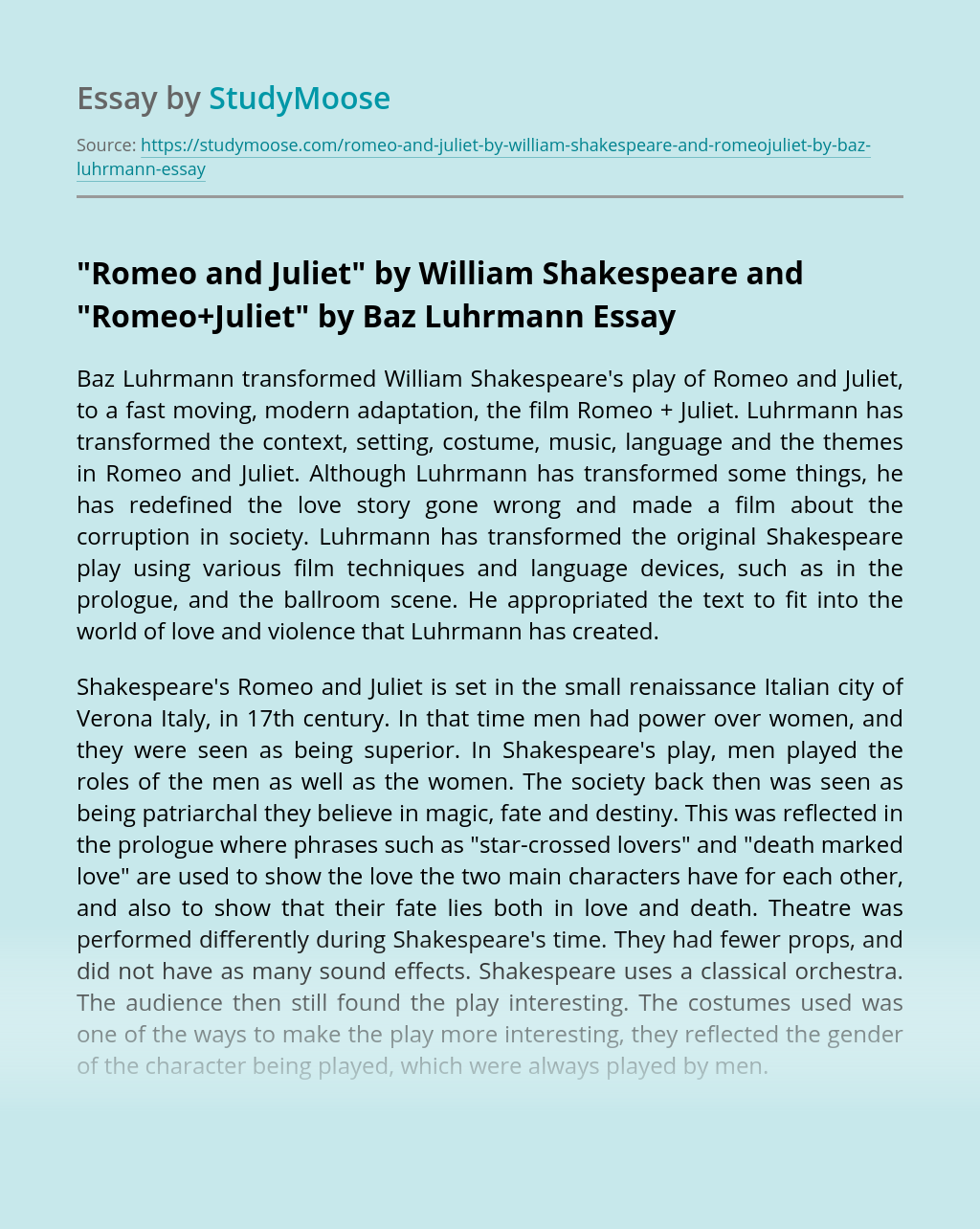