Both the Roman Empire and China’s imperial state had many similarities when they were transforming into the empires they once were. Our textbook, Ways of the World, states that they were both flourishing roughly around the same time and had a similar population sizes. They were on opposite ends of Eurasia; the Roman Empire occupying the west side and China occupying the eastern side. Although they were not very aware of each other, there are still very striking similarities and differences of the empires as pointed out in the textbook.

Don't use plagiarized sources. Get your custom essay on
“ Roman Empire and China’s Empire ”
Get custom paper
NEW! smart matching with writer

For Rome, they were transforming from city-state to empire. They began as a city state that was so impoverished and weak that they would kidnap women from neighboring countries to maintain their population. Rome was originally ruled by a king that was then overthrew by Roman aristocrats who then established a republic.

Within this republic there was a wealthy class (Patricians) and a poor class (Plebeians). This division in the classes deepened the conflict which led to a written code of law, to offer Plebeians some protection, called “the way of the ancestors.

” This offered lower classes opportunities to shape public policy; add new office of tribune who represented the Plebeians. This new system was something that the Romans took great pride in. There was also now established roles in the empire making it a warrior society, meaning that the men were to take roles as soldiers and property owners.

Around 490 B.C.E. was when Rome began to expand by taking over its Latin neighbors.

In 264-146 B.C.E. they had won the Punic War with Carthage and took control of the Western Mediterranean, which in turn made Rome a naval power. However, the expansion of Rome into new territory created many Vulnerabilities. In turn they prepared with an army that was known for being “well-trained, well-fed, and well-rewarded.” This army is what helped build the empire.

For China, they were transforming from a warring state period between seven kingdoms to a vast empire. However, in this case China was not creating something new they were trying to restore something that had once been. It began with the Qin dynasty who was led by Shihuangdi. The Qin had developed an effective bureaucracy, subordinated its aristocracy, equipped itself with an army and iron weapons, and had a rapid rising agricultural output and growing population. The dynasty had also adopted Legalism, which made clear rules and harsh punishments by the government.

With this successful and resourceful dynasty they launched a military campaign to reunify China and did so in just 10 years. The Chinese empire was formed in a more compressed period of time than the Roman Empire however, it still relied heavily on military force. They built the Great Wall of China to keep out norther “barbarians” and it was going to be used as monumental mausoleum.

The Qin dynasty had also imposed a uniform system of weights, measure, currency, and written form of the Chinese language. Even with all of these giant strides towards a larger empire the Qin dynasty collapsed in 206 B.C.E. which was then followed by the Han Dynasty (206B.C.E.-220C.E.) who got rid of Legalism in exchange for Confucianism.

When it comes to the similarities and differences there is quite a few, even though the empires were on entirely different sides of the continent. Both China and Rome had invested heavily into public works like roads, bridges, aqueducts, canals, and protective walls. All of this was designed to integrate their territory militarily and commercially. The authorities of the empires also had turned to supernatural sanctions to support their rule. The Romans started to call their deceased emperors as God’s and established a religious cult to uphold the powers of the living rulers. China however had an older tradition that linked events that were happening here on earth with a “heaven.” This so called heaven was not a place it was more of an impersonal mora force that regulated the universe. Going along with the religious cults in the Chinese empire, emperors were called Sons of Heaven that were governed by what was called the mandate of heaven. If invasions, rebellions, or floods were to happen that was seen as a sign that the emperor was ruling badly.

Each coming from a warring-state and city-state empire, they had different relationships to the societies that they governed. The small city-state meant that the Romans and even the Italians that they had invaded were a minority in the empire. Whereas China was already ethnically Chinese and even the “barbarians” that they had brought in through conquest were integrated into the Chinese culture rather easily.
When it came to language Rome and China had very different systems. The Roman Empire primarily used Latin which also paved a way for other distinct languages within the empire among the minorities. The Chinese used what was called Chinese Characters where each one would represent a word or idea rather than the sounds, which did not easily transform into other languages within the empire. This language choice was the main reason that the Roman Empire was able to keep their separate cultural identities as stated above.

Politically, both empires had their differences also. When it came down to it the book states that The Chinese tradition looked for “good men” whereas the Romans looked for “good laws.” The Chinese had developed an elaborate bureaucracy to hold the empire together, which included a civil service system that used exams and selection by merit. The Roman Empire relied on regional aristocratic elites and the army to hold them together, however they created an elaborate body of law that related to all the people.

Even with all these advancements in the empires one negative affect the empires had in common was their impact on the environment. The Romans relied on mining operations which led to deforestation, and the melting of metals left a ton of lead in the atmosphere. The Chinese ironwork industry also contributed to air pollution. Their agriculture also diminished the land causing it to erode and turn into what is now known as the Yellow River. 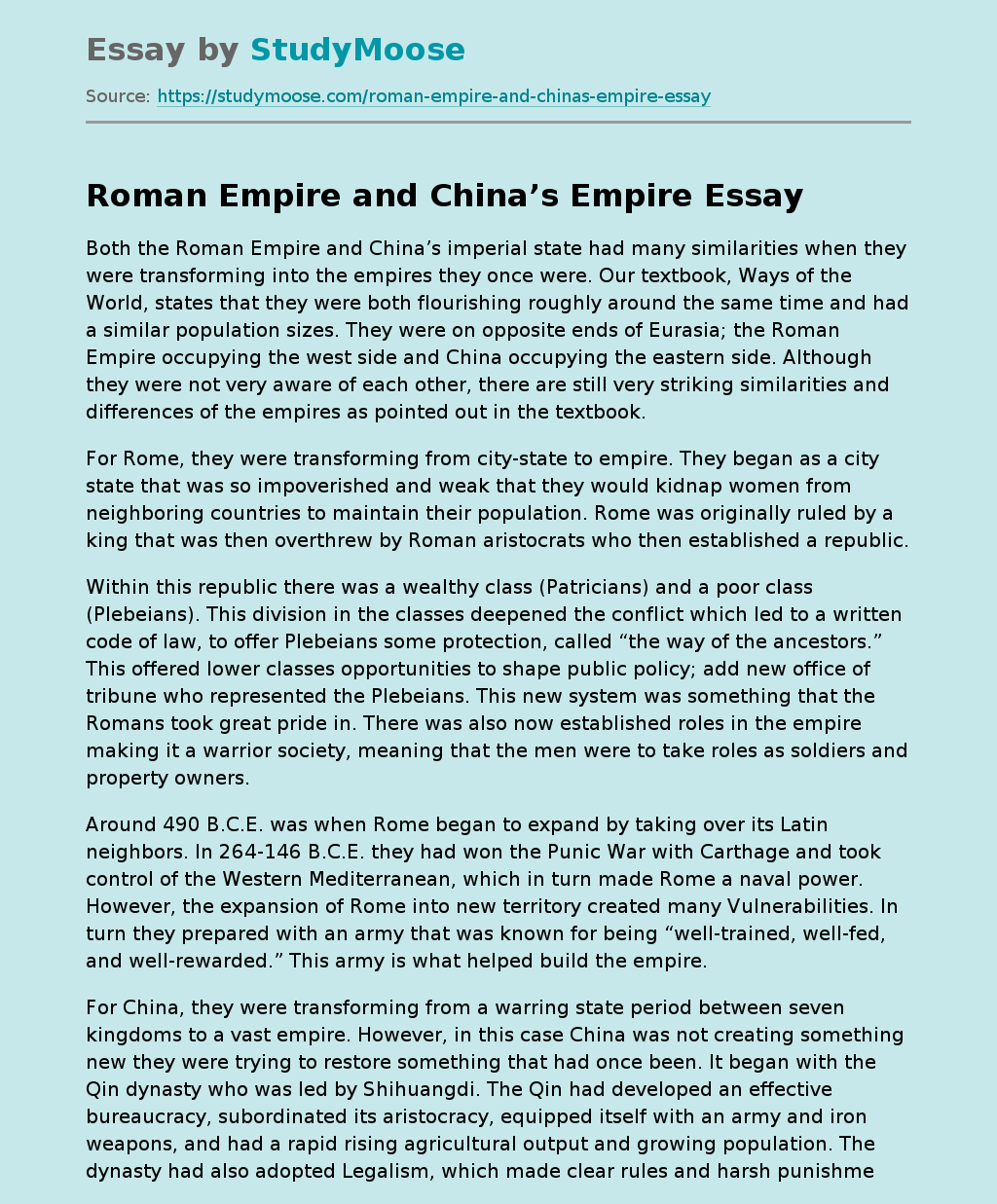