The Armed Forces of the Philippines Transformation Roadmap (AFPTR) are important part of our plan to meet our aspiration to become a world class armed forces. We look to build a strong military, to be fully mission effective, professional, credibly equipped and highly responsive to the technological, doctrine and sociological changes. I believe we can achieve our vision to become world class armed forces that is a source of national pride by 2028. The AFP can reach these goals, by first, adherence to the components of the transformation roadmap, second, through the strong support of the stakeholders and third, through the absolute commitment of the leadership.

Don't use plagiarized sources.
Get Your Custom Essay on ROADMAP for WORLD CLASS AFP Just from $13,9/Page

The AFPTR is based on the Performance Governance System (PGS) which is an adaptation of Harvard’s Balanced Scorecard framework into local circumstances of the Philippines. (OJ5, 2014) The AFP instituted reforms based on the principles of good governance and performance excellence. AFPTR has three key components, first, Charter Statement, which sets and defines the strategic direction to pursue.

Second, Strategy Map which outlines the strategic objectives and defines the interrelationship among these objectives. Third, Governance Scorecard to ensure that the strategic objectives are achieved and the 2028 vision is realized. (OJ5, 2014) The AFP has set up three base camps along the way that must be achieved to get closer to the 2028 vision. By the end of 2016, fully mission capable AFP. By 2022, a strong and sustainable armed forces in the pacific region. The end-goal for 2028 is to become a world-class armed forces.

In mission capable AFP, one source of skepticism, is the mission capable in territorial defense, particularly capable in securing the country from aggression or invasion, this is because of our limited resources and equipments. To address this problem, the AFP needs to strengthen security alliances and partnership with other countries through sustained bilateral and multilateral engagements and continuous participation in the United Nations program or missions. Another is through strategy formulation of a minimum credible defense that could enable the government to protect the national interest by deterring and preventing intrusion or possible invasion. (OJ5, AFP Strategic Planning System, 2014) Regarding limited resources, the AFP’s objective is to enhance effective budgeting, fiscal discipline, transparency and accountability with a strategic initiative of developing a financial and resource rating.

To be a source of national pride, the AFP has to work hard to win the hearts and minds of the people as well as to earn the support of the stakeholders. The AFP has to develop and communicate a brand image consistent with its core values, honor, service and patriotism. The AFP also recognizes the imperative of reaching out and to engage with key stakeholders. According to President Aquino” This is why we are engaging various stakeholders in our peace and security efforts. The AFP Internal Peace and Security Plan (IPSP) open up space for people’s participation in defining, shaping, and ensuring national peace and security.

It acknowledges that the contributions of each and every government agency, civil society organization, and even local community, are vital in realizing our common goal…” (www.scribd.com/doc/46302366/AFP-Internal-Peace-and-Security-Plan-IPSP-BAYANIHAN, 2010) The timeframe of the IPSP is six years, from 2011 to 2016, which is designed to render communist insurgency irrelevant by 2016, however, at present, their strength remained almost the same. (Mallari, 2013) Despite this, Chief of Staff General Bautista said “These are not our criteria now for measuring our performance… we are looking at the peaceful condition in different localities…if there is development, if there is economic progress in the area that is the ultimate”. (Mallari, 2013)

Another source of apprehension is the frequent change in leadership. The AFPTR has adapted a long-term and strategic approach to governance. This will provide stability to the programs and policies of the AFP which will serve as a guide for the strategic priorities of the succeeding leadership and therefore will not be personality driven.

In conclusion, the vision to become a world-class armed forces by 2008, although audacious and ambitious is achievable, through proper implementation or execution of AFPTR, dedicated commitment of the leadership and strong support of various stakeholders. This governance framework will integrate and harmonize the different programs and activities of the AFP. With IPSP open to the public, it signifies the AFP’s intend to draw on the support of the wide spectrum of stakeholders. The paradigm shift in relation to IPSP of winning the peace rather than simply defeating the enemy will culminate to security, development and progress. 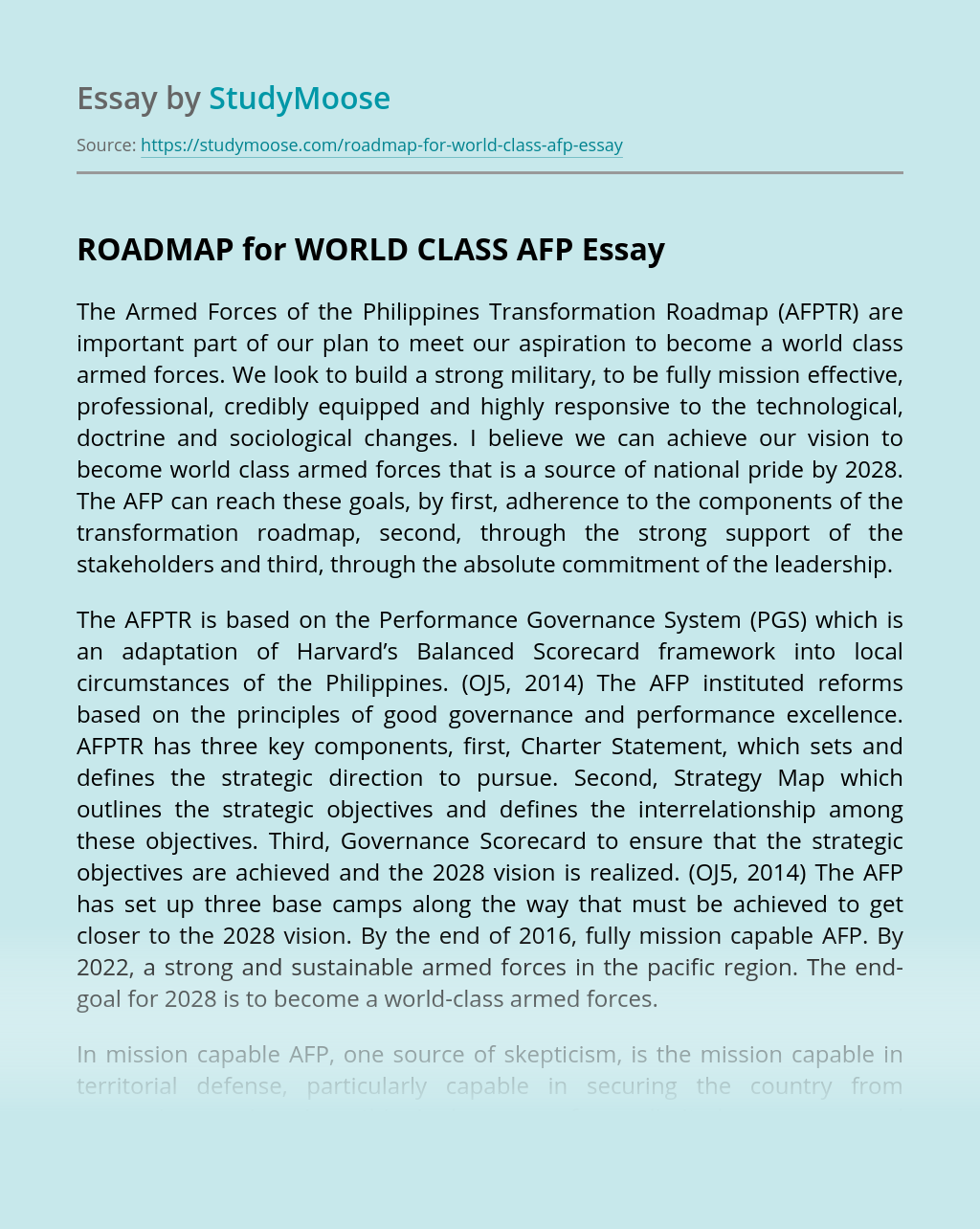 One often finds that standing up and working in favor of the greater good usually results in negative consequences. Edward Snowden encountered this crossroad while working as a technical contractor for the NSA and the CIA. While working at the NSA’s Oahu office, Snowden began noticing various government policies and techniques that the NSA was...

Jared diamond and his theory on how and the Europeans were so successful in their conquest of the incans. This was made possible due to the location of Europe. With the inventions of guns, and steel, along with being exposed to many germs before the incans. This gave the conquestidors many advantages over the inca....

Since the adherence to international social standards has become a mandatory requirement in the international business arena, the local suppliers have to be compliant to these standards in order to remain in business. There have been some significant revisions to the Bangladesh Labor Law in 2006. This newly revised law already covers a lot of...

Executive Summary Pacific Grove Spice started as a small specialty grocer on the Monterey Peninsula of California in the early 1980s. Within 10 years they were the “place” to find spices in Central California and now have a widespread reach covering all 50 states. The spice industry that it is in has been growing steadily...

For the purpose of this assignment I will look at the legal and ethical aspects involved in the following scenario and this will be discussed. I will take into consideration both the deontological and consequentialism theory. Laws relevant to this scenario will be looked at. Scenario To maintain confidentiality the name of the patient has...