British Airways has been in existence for many years prior to its transformation time; in the early 1980s, the British Airways was experiencing turbulent times as it was undergoing the worst financial loss in the airline’s history. It is estimated that the airline was losing around ? 200 every minute.

This is because the passengers were strongly advised by their union officials to avoid traveling with the airline at all cost. There was demand for the airline to merge British Overseas Airways and the European Airways following the adoption of the Civil Aviation Act.

Don't use plagiarized sources. Get your custom essay on
“ British Airways (1980-1990) Transforming ”
Get custom paper
NEW! smart matching with writer

This particular article focuses on how the corporations like British Airways can revamp themselves after undergoing a major reconstruction especially changing the mindset of the workers within the organization.

It considers how successful organizations undergo metamorphosis by altering its internal structures while ensuring that the employees, as well as the management, are comfortable with the changes and they can move along in ensuring the objectives of the organization are achieved through customer service.

I tend to concur with principles employed by British Airways that enabled it to solve the crisis and emerge as a strong indivisible institution.

In the beginning, life at British Airways meant nothing like the central focus of the organization was just on seeing their aircrafts flying and landing safely at various airports. Workers who were quite close to the management were being favored despite their dismal performance in terms of service delivery to the clients. The airline was marred with corruption allegations.

This did not go well with the employees as they felt it was pointless to form a union with individuals whose qualifications were questionable as they could not perform their duties according to the required standards.

The management including supervisors and other managers resolved to micromanage the employees as they carried out their duties. This created a feeling of bossiness on the part of the employees.

Each and every employee had a set of duties designated to them. The Airline was also characterized by agents performing duties that are not assigned to them. Following these concerns, passengers were poorly served at the airport. The airline then began to lose revenue as passengers opted for other airlines leaving British Airways with little income to manage the airline.

The airline experienced a lot of difficulties as it endeavored to make the necessary changes both in its internal structure as well as its outward look. In every organization undergoing a transformation like British Airways, the essential change make is the mindset of the workers.

This was the main hurdle that the airline faced. Most of the employees were used to the traditional ways of doing things. According to,when workers speak in one voice, it becomes very difficult to instill any changes in the manner in which they operate.

However, the organizations that were looking forward to steering the airline seemed divided especially on the manner in which it was to be run. This resulted in the failure of various initiatives put in place by the management. This tussle resulted in employees doubting the stability of their jobs at the airline in the near future as they felt that their efforts were not appreciated.

The airways underwent a complete overhaul as they brought in a new leader who had the requisite vision to steer the company out of the predicaments it was facing. The new leader began by assigning each and every employee to the right position with regards to their qualifications. He also came with a competent team of individuals who were committed to ensuring that the vision of the leader is accomplished.

The leader also ensured the British Airways remained with a lean staff who are highly qualified for the job as he brought Marshall, an expert in customer service who offered encouragement to the employees. Following the intrinsic motivation by Marshall, the workers became responsive to the goals as well as objectives of the organization.

This was observed as they effectively and efficiently performed their duties. Following the change in the company’s leadership employees were empowered as Marshall equipped them with the necessary skills on how to better their customer service delivery.

It worth noting that the changes that were witnessed in the company didn’t happen overnight. It happened over a duration of about 10 years. In 1981, Mr. John King acquired the chairmanship of the company. and immediately embarked on the implementation of his vision and objectives deemed to transform the company. The management then launched a plan which steamed the already bad losses the company was incurring thus saving the airline from undergoing bankruptcy.

His plan involved laying off of some workers. He stopped increasing salaries for the employees for a period of 1 year as routes were also closed, he subsequently ensured no cargo services were rendered at the offices. Gordon Dunlop was brought to audit the airlines accounts.

In conclusion, between 1980 and 1990, the management of the airline was characterized by trial and error. The company could have this through the use of the Total Quality Management system to assist in improving the company performance gradually. Through this system, the company could have become efficient and profitable as it improves its products as well as the services they render. 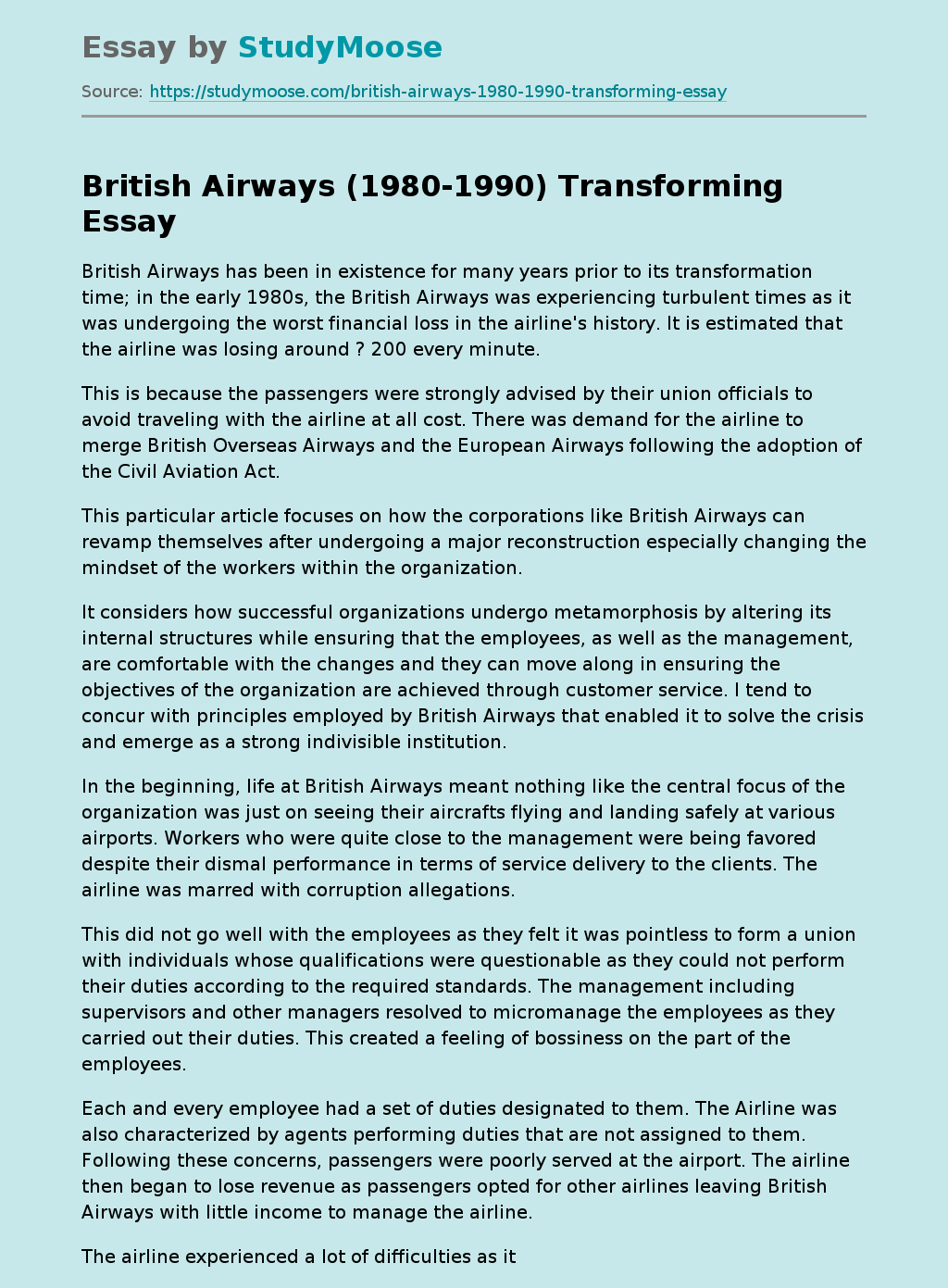