Review of "The Count of Monte Cristo" by Alexandre Dumas

The Count of Monte Cristo

Edmond Dantès – The protagonist of the novel. Dantès is an intelligent, honest, and loving man who turns bitter and vengeful after he is framed for a crime he does not commit. When Dantès finds himself free and enormously wealthy, he takes it upon himself to act as the agent of Providence, rewarding those who have helped him in his plight and punishing those responsible for his years of agony.

The Count of Monte Cristo – The identity Dantès assumes when he emerges from prison and inherits his vast fortune.

Don't use plagiarized sources. Get your custom essay on
“ Review of “The Count of Monte Cristo” by Alexandre Dumas ”
Get custom paper
NEW! smart matching with writer

As a result, the Count of Monte Cristo is usually associated with a coldness and bitterness that comes from an existence based solely on vengeance.

Lord Wilmore – The identity of an eccentric English nobleman that Dantès assumes when committing acts of random generosity. Lord Wilmore contrasts sharply with Monte Cristo, who is associated with Dantès’s acts of bitterness and cruelty.

Appropriately, Monte Cristo cites Lord Wilmore as one of his enemies.

Abbé Busoni – Another of Dantès’s false personas. The disguise of Abbé Busoni, an Italian priest, helps Dantès gain the trust of the people whom the count wants to manipulate because the name connotes religious authority.

Though Mercédès marries another man, Fernand Mondego, while Dantès is in prison, she never stops loving Dantès. Mercédès is one of the few whom Dantès both punishes (for her disloyalty) and rewards (for her enduring love and underlying goodness).

Abbé Faria – A priest and brilliant thinker whom Dantès meets in prison. Abbé Faria becomes Dantès’s intellectual father: during their many years as prisoners, he teaches Dantès history, science, art, and many languages. He then bequeaths to Dantès his vast hidden fortune. Abbé Faria is the most important catalyst in Dantès’s transformation into the vengeful Count of Monte Cristo.

Fernand Mondego – Dantès’s rival for Mercédès’s affections. Mondego helps in framing Dantès for treason and then marries Mercédès himself when Dantès is imprisoned. Through acts of treachery Mondego becomes a wealthy and powerful man and takes on the name of the Count de Morcerf. He is the first victim of Dantès’s vengeance.

Albert de Morcerf – The son of Fernand Mondego and Mercédès. Unlike his father, Albert is brave, honest, and kind. Mercédès’s devotion to both Albert and Dantès allows Monte Cristo to realize her unchanging love for him and causes him to think more deeply about his sole desire for revenge.

Signor Bertuccio – Dantès’s steward. Though Bertuccio is loyal and adept, Dantès chooses him as his steward not for his personal qualities but because of his vendetta against Villefort.

The movie takes place in a number of settings, but most of the plot occurs in Marseilles Chateau d’If, and Paris (France), Rome, the island of Monte Cristo, and Greece.

Edmond is sailing in French waters along with his best friend, Fernand, when their captain falls ill. They stop for help at a nearby island, which happens to be where Napolean Bonaparte is in hiding. Bonaparte pulls aside Edmond and asks him to deliver an “innocent letter” to an old friend in Marseille, France. Edmond agrees, as that is the price for the use of Napolean’s physician. The captain unfortunately dies, so the crew returns home to Marseille. Edmond is made captain for his bravery in seeking a physician, and the first mate comes to despise him for it.

Fernand finds out about the letter, and reads it while Edmond is sleeping, and is angry that Edmond did not tell him about it. Edmond, not knowing that Fernand knows about the letter, rushes to greet his fiance, Mercedes, and tell her that they can now be married as he was just promoted to captain. This is also the point in the movie when you realize that Fernand is in love wiht Mercedes, but she loves Edmond.

Fernand, still angry, decides to work together with the furious first mate, and get Edmond arrested for treason, which he didn’t commit. Fernand works also with a very important magistrate, Villefort, who’s father is the man Edmond was to deliver the letter to. (Villefort does not know of this). Thus, Edmond is arrested, and thrown into a remote island prison by the name of Chateau D’if. There, he meets Priest, who teaches him many valuable lessons about life, how to sword fight, and give Edmond a proper education. All this is in turn for Edmond helping to dig, in order to escape the prison.

For 13 years, Edmond is held captive in the Chateau D’if, and unknown to Edmond, a letter was sent to his family and Mercedes saying that he was executed on grounds of treason. Finally, Edmond escapes when the priest dies, and becomes part of a crew on a merchant vessel, along with his good riend Jaccapo. After 3 months, Edmond is released along with Jaccapo, and they go in search of finding out what has happened to Edmond’s loved ones. They find out that Edmond’s father commited suicide, and the Mercedes wed Fernand a month after learning of Edmond’s execution.

Edmond has by this time (with the help of the priest while in prison) figured out that he was framed by Fernand and the others. Thus, he and Jaccapo sail to a remote island that the Priest told Edmond about, and there they find a treasure, making Edmond extremely wealthy. Edmond decides to become a count in order to get revenge on those who betrayed him, so he becomes The COunt of Monte Cristo, being the treasure he found The Treasure of Monte Cristo.

Soon after, he “saves” Fernand and Mercedes’ son Alber from captivity, and thus enters the lives of those he is trying to hurt like they hurt him. Mercedes begins to suspect that The Count is really Edmond, and when she confronts him privately, he denies it but slips and she realizes that he really is Edmond. Then, they kiss, and realize that they are still in love, so Mercedes goes back ot her Chateau to inform Fernand that she is leaving him, when Fernand tells her that he has gone bankrupt (which is really Edmond’s doing, but he doesn’t know this) and is leaving the country. (By this time, Villefort has been convicted of murdering his father and sent to jail, also doings of Edmond’s). Mercedes preceds to inform Fernand that Alber is not his son, but Edmond’s.

Fernand becomes angry and goes out to his old, abandoned villa to collect the gold he had supposedly stolen from The Count of Monte Cristo, only to find that it is not there (Edmond’s doings, again). Then, Edmond shows up, and tells Fernand where he has been all these years, and they begin a duel, only to be stopped by Mercedes and Alber. Mercedes then tells Edmond that Alber is really his son, not Fernand’s. Fernand then shoots Mercedes in the shoulder (she lives) and runs off. Edmond follows him and they begin sword fighting again. Fibally, Edmond kills Fernand, and goes back to Mercedes and Alber and Jaccapo. At the very end, Edmond buys the Chateau D’if thanks the Priest for his wisdom and help.

The “Count of Monte Cristo” is the greatest tale of betrayal, adventure, and revenge the world has ever known. One of the morals in that story is ‘what goes around comes around’. The people who betrayed the count ended up by paying with their lives as he cleverly took his revenge on each one. Plus, the fact that the count actually really did find treasure and good friends (in the form of pirates) meant that he was a good person who attracted good people. Regardless of the fact that the pirates could have treated him badly and even shot him when he found the treasure, they didn’t, they became his friends and they benefitted from his success. The main moral is that the bad deeds we do in life do not go unpunished and the good ones get rewarded.

Review of "The Count of Monte Cristo" by Alexandre Dumas. (2016, Sep 11). Retrieved from http://studymoose.com/review-of-the-count-of-monte-cristo-by-alexandre-dumas-essay 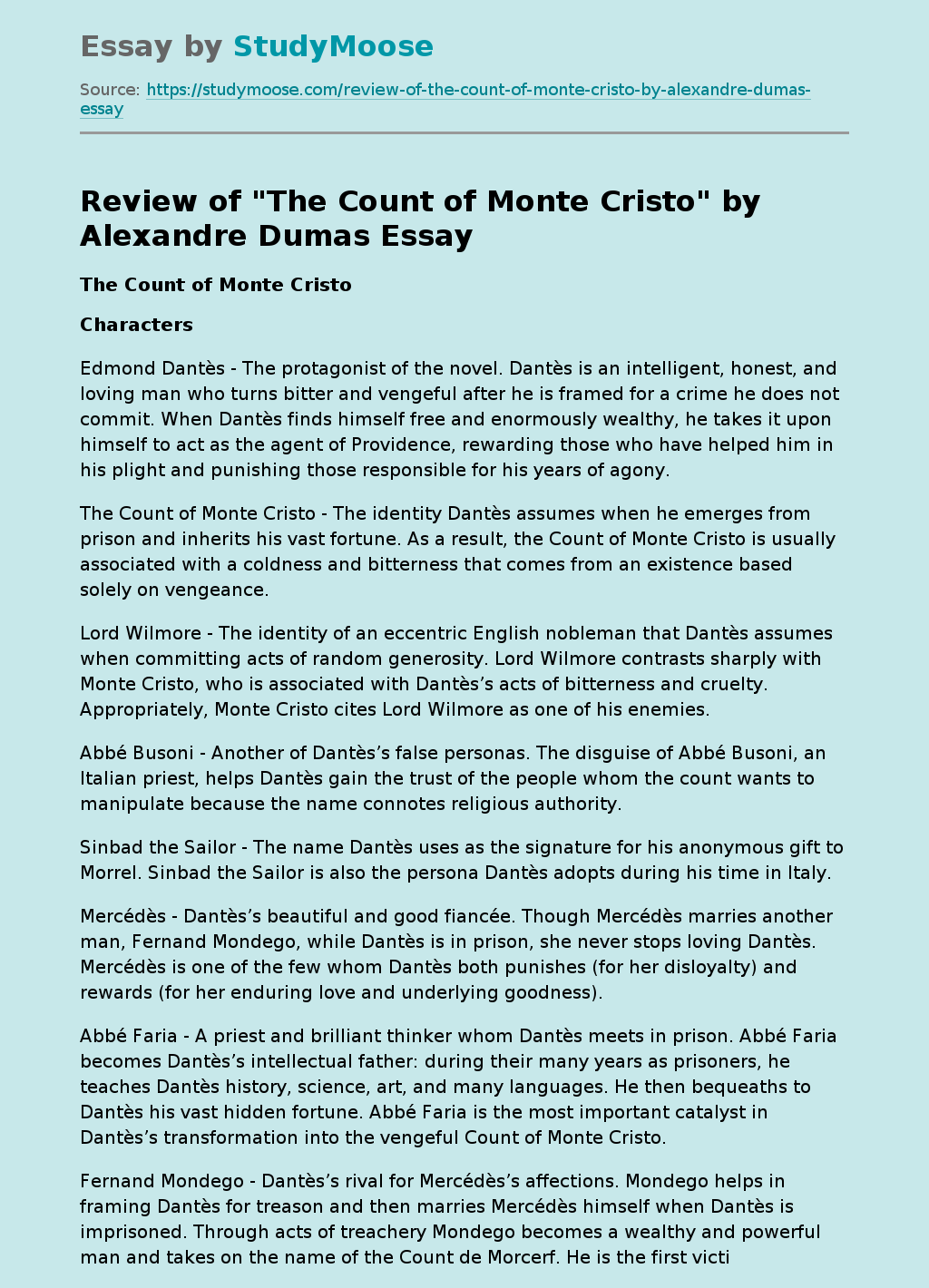