A parenting style is a method or type of parenting which directly and indirectly influences the development of the child. Developmental psychologists study the physical, cognitive, social, intellectual, perceptual, emotional and personality growth and development that occurs throughout a lifetime. The purpose of this research was to identify how specific parenting styles positively and negatively correlate with behaviors in children, how they affect children, and what methods of parenting could be used to benefit the development of children.

Developmental psychologists have long been interested in how parents impact their child’s development.

However, finding the actual links between the specific actions of parents and the influenced behavior on children is very difficult. Some children that are raised in entirely different environments can later grow up to have remarkably similar personalities. And some children who share a home and are raised in the same environment can grow up to have completely different personalities than one another.

In my literature review I will be going over some of those links and the studies that are associated with them. In a study conducted by Alizadeh Shahla, Abu Talib Mansor, Abdullah Rohani and Mansor Mariani, the relationship between parenting style and children’s behavior problems were addressed.

The sample in this study consisted of 681 mothers of students in elementary school (levels 3, 4, 5), who were chosen from eight schools In Tehran. Mothers were identified through their children who comprised 347 girls from four schools and 334 boys from four schools chosen by cluster random sampling. The Mothers were given a Children’s Behavioral Checklist (CBCL) Questionnaire and a Parent Authority Questionnaire (PAQ).

Lastly, the Authoritarian level of mothers had a roughly equal significant correlation with internalizing and externalizing. While the sample size of this study may be large enough to be considered representative of the population, the study itself limited parenting style to factors based only on children’s misbehavior. Many other relevant factors were not taken into consideration, such as age, genetics, economics, peer pressure, parent’s income, society, school, etc. The study also excluded men, only taking data based on the parenting styles presented by women. Moreover, the parents could have responded to the questionnaires in the way the wanted their families to be represented, resulting in false or distorted information. In a study conducted by Önder Fulya and Cenkseven Yilmaz Yasin, the role of life satisfaction and parenting styles in predicting delinquent behaviors among high school students was addressed.

The Delinquency Scale (DS), is used to determine behaviors which would be regarded as crime if they reflected and bring adolescent face to face with laws. The Parenting Style Inventory (PSI) is a 26 item scale that has three factors: acceptance/ involvement, strictness/supervision, and psychological autonomy. The Multidimensional Students’ Life Satisfaction Scale (MSLSS) is a 40 item self report instrument that assesses satisfaction across five specific life domains: family, school, friends, self and living environment. The researchers concluded that when all test results were considered, satisfaction variables perceived from “strictness/supervision”, “school”, “family” and “self” have a positive correlation and meaningful contributions in explaining the highness of delinquency. While the researchers state that “strictness/supervision”, “school”, “family” and “self” have a positive correlation they are only referring to the 76.3% of the sample groups that tested positive and neglecting the 23.7% that did not. The sample sizes are large but the specifications of the parents in the “delinquent” sample group are too varied and therefore may represent misleading data.

There were many different styles of questionnaires in this study which may be causing the data to become more complex than it needs to be in order to understandable results. In a study conducted by Jabeen Farah, Anis-ul-Haque and Riaz Muhammad Naveed, parenting styles as predictors of emotion regulation among adolescents are addressed. The sample of this study was 194 adolescents ages 12-15, 7th-9th grade from private secondary schools. The students were asked to respond to the Parental Authority Questionnaire (PAQ) and the Early Adolescents Temperament Questionnaire (EATQ). The Parental Authority Questionnaire was designed to measure Baumrind‘s threedimensions: Authoritative, Authoritarian, and Permissive.

Furthermore, the parents which correspond with the children of this study are all middle class and have moderate incomes rather than low or high incomes, and children who have single parents were excluded from the study. Also, there still remains the chance that some children may have not answered their questionnaire honestly. In a Longitudinal study conducted by Tong Lian, Shinohara Ryoji, Sugisawa Yuka, Tanaka Emiko, Maruyama Akiko, Sawada Yuko, Ishi Yukiko and Anme Tokie, the relationship of working mothers’ parenting style and consistency to early childhood development was addressed. The sample consisted of 504 participants recruited through 41 care facilities in Japan. Both children and their mothers participated. The mothers were surveyed regarding parenting behaviors and home environment, and service providers evaluated the development of each child in the facilities. Child development was assessed using six primary measures: gross motor skills, fine motor skills, social competence, communication skills, vocabulary and intelligence.

Environmental stimulation was evaluated through: human stimulation, avoidance of restriction, social stimulation and support. Each child was evaluated by childcare professionals in 2004 and again in 2006 using developmental scales. Results of the study showed that children’s gross motor development was statistically significantly related to mother’s parenting practices at the beginning of the study. The ages of the children that were included in this study varied, and children with mental disabilities were excluded from the study entirely. The study addresses a “working mother’s” relationship but feels that it is perhaps unnecessary to consider the implications of a working father’s parenting style, or for that matter, the father’s influence on the child at all. Also the study could be conducted longer than 2 years for more insightful results. In a study conducted by Parsasirat Zahra, Montazeri Mona, Yusooff Fatimah, Subhi Nasrudin and Nen Salina, the most effective kinds of parents on children’s academic achievement are addressed. The sample included Iranian high school students who were between the ages 15 to 17.

The age groups tested by the study were between fifteen to seventeen, so an assumption that similar correlations would be applicable to all other age groups of children will not have any definite proof. The data relies on the honesty of the participants and so data is not for certain conclusive evidence. There are many different factors to parental styles that influence children’s behavior. And while the definitive links between parenting styles and behavior may be unknown, correlational research has been able to make the parental styles which establish those links to become clearer to us.

Through my research I have gathered that there are specific parental styles that positively and negatively correlate with behaviors in children. That strictness can manage delinquency, that permissive parenting can correct behavioral problems, or that perhaps authoritative parenting can help children in academics when paired with permissive. I have also noticed that the Parental Authority Questionnaire (PAQ) is generally a good questionnaire as it is frequently used. 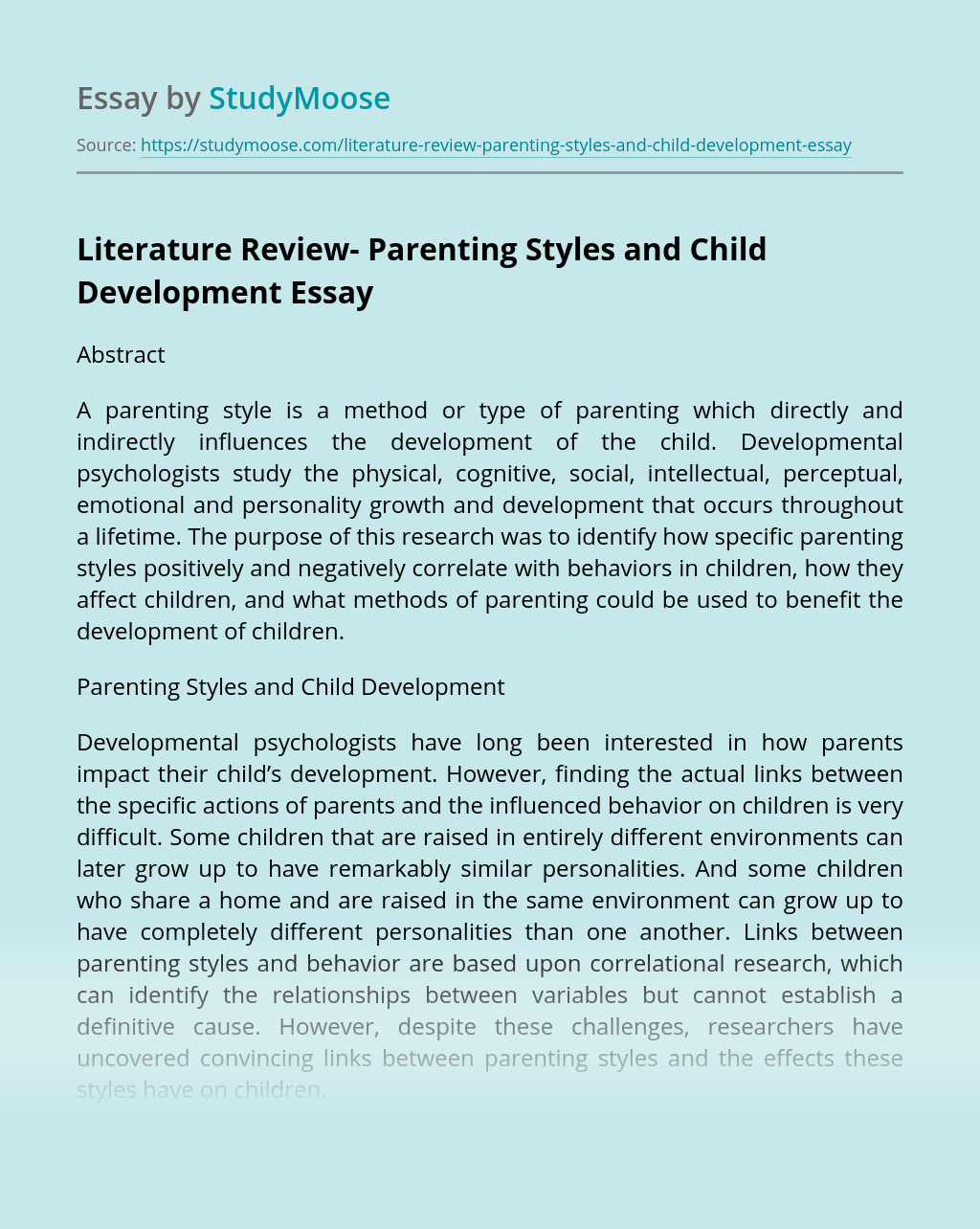