•Authoritarian Parenting – this type of parent is demanding but not responsive, children are expected to follow the strict rules and parents fail to explain their reasons behind their rules and might just reply by saying, “Because I said so!”

•Authoritative Parenting – the parent is demanding and responsive, lie authoritarian parenting these parents have rules to follow but this parenting style is much more democratic.

Don't use plagiarized sources. Get your custom essay on
“ Parenting Styles Theory by Diana Baumrind ”
Get custom paper
NEW! smart matching with writer

Authoritative parents are responsive to their children and willing to listen to questions. When children fail to meet the expectations, these parents are more nurturing and forgiving rather than punishing.

•Neglectful Parenting – this type of parenting is usually referred to as uninvolved parenting, they are neither demanding nor responsive. Parents are emotionally unsupportive of their children but will still provide their basic needs (food, housing etc…). In extreme cases, these parents may even reject or neglect the needs of their children. One of the main parenting styles identified by Baumrind is known as the authoritative parenting style. This style of parenting is sometimes referred to as “democratic” and involves a child-centric approach in which parents hold high expectations for their children (Baumrind, 1967).

This type of parenting reflects the type of parent that my sister is to her son. My nephew is fourteen (14) years old now, during his child hood my sister would lay down a set of rules for him to follow. These rules matched with his daily routine of small chores and responsibilities seemed harsh at the time, but whenever he needed to be disciplined instead of immediately punishing him, she would put him to sit down and ask him why he did the things he did. This was more or less the method she chose to use with him and as a result, my nephew would be more open about his reasons for his actions and in so doing she was able to build a trusting relationship between them.

My nephew grew so accustomed to this method that over time he became more respectful and focused in his studies. He began to understand that with every wrong action there would be consequences, yet he felt loved and he felt comfortable opening up to his mother about any problems. My sister’s authoritative parenting style not only encouraged him to be independent but now he reciprocates these actions with my 18 month old son. I can identify with Baumrind’s Authoritative parenting style since that is the way that I too was raised by my mother and since the birth of my son I have adopted the same method.

I express warmth and love while at the same time I give him limits and consequences for his actions. My method is to try to reason with him and try to explain to him that what he is doing is wrong by teaching him from the early stages to discuss things. In my opinion it demonstrates fairness for both parent and child and it encourages a trusting relationship which I believe is necessary for a child’s development. 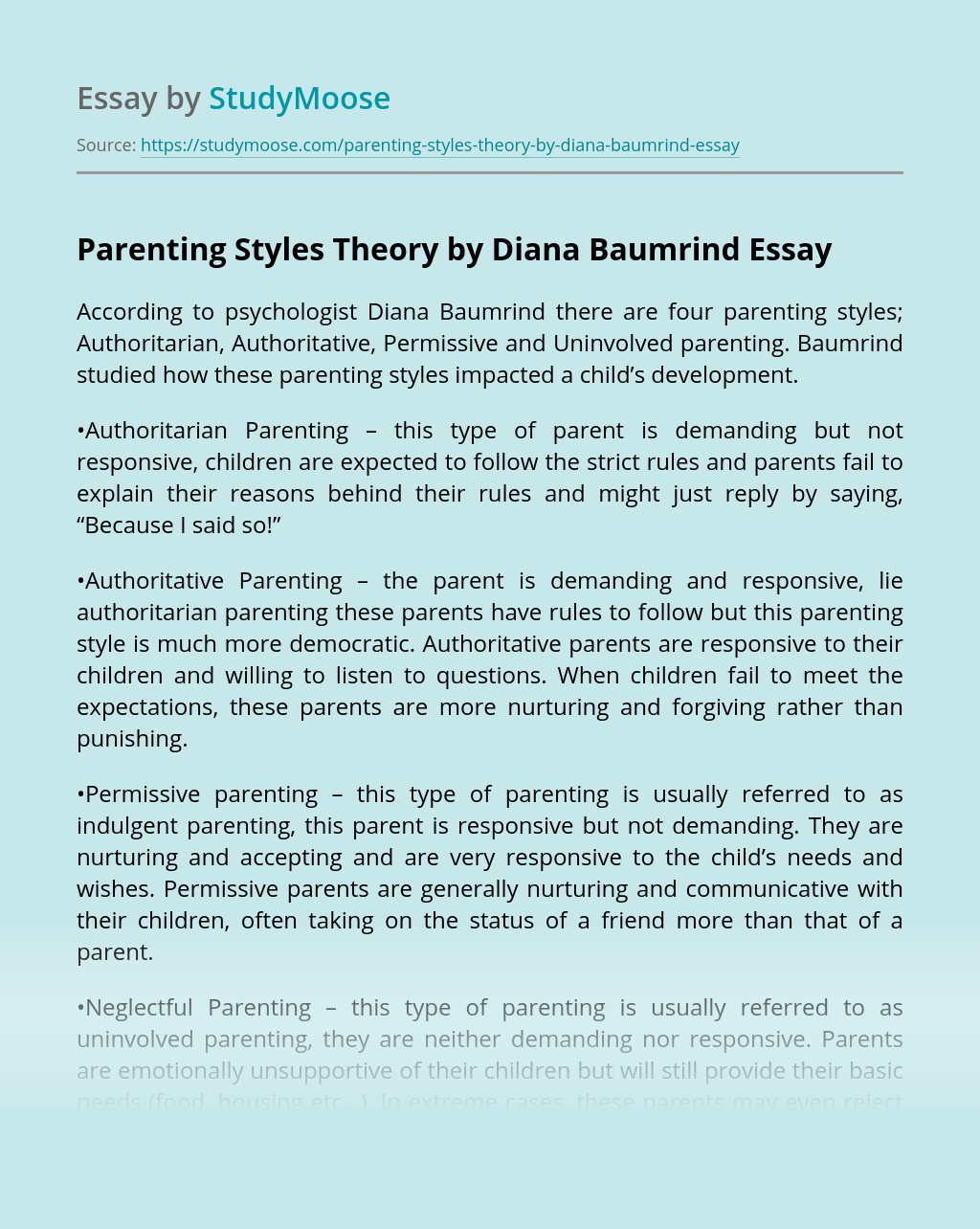