What is the problem?

Diana Gillen is the General Manager at the Cobb Street Grille who applied and is hoping to become the new District Manager. After being rejected from the first position 9 months ago, Diana was convinced that she had this current position under her belt. Unfortunately, she did not get promoted and she was left to feel upset and judgmental with how the applicants were chosen for this position. This case demonstrates how an individual must learn to express their emotions in an appropriate manner and be open to learn new and effective ways to be a leader.

Turn in your highest-quality paper
Get a qualified writer to help you with
“ Diana’s Disappointment ”
Get high-quality paper
NEW! AI matching with writers

Why do these problems occur?

In this case, Diana is not good at controlling her emotions and the majority of the time her emotions get the better of her. Emotions are psychological, behavioral and physiological episodes that make an individual feel the need to react without being aware. Diana’s emotions are present at numerous times during this case. For example, she felt uneasy as she arrived at the Cobb Street Grille corporate offices along with feeling anxious and fear when learning what the outcome would be on her promotion.

There were multiple times during the case where Diana showed physical emotions, such as bursting into tears and cringing when she found out that she did not get the position. These are all examples of Diana not having control over her emotions. She needs to be able to work on controlling her emotions in order to be able to react in situations like these.

Self-awareness is the act of understanding and defining the meaning of your own emotions. Diana has a high self-awareness because she knows she wants to be a District Manager and she thinks she is the perfect fit for the position. Her values are to work hard and follow the rules that are assigned to her and she shows off her strengths of being able to manage a restaurant. Also, her motivation to become a district manager is present.

Self-management is how well an individual can control his or her inner state. Diana is very capable of managing herself along with preparing for the role as a district manager. The down side, however, is that she sometimes loses her cool when trying to complete tasks or get certain jobs done. She is known to be a strict employee but is also very loyal and strives for her and everyone around her to do well. However, when she was told that she was not going to get the position she was hoping for, she let her self-management collapse and began to tear up.

Social awareness is the ability of understanding the meaning of other’s emotions. When it comes to being aware of the employees’ emotions and feelings, Diana deeply lacks in this territory. She rarely pays attention to her employees when they have a request, an idea, or even just an opinion. What makes it worse is what the employees have to say about her. The title ‘Ice Maiden’ is thrown around amongst the employees behind Diana’s back. She believes that meeting her financial goals is the only objective she needs to follow, and because she exceeds these goals, Diana considers herself and her performance outstanding. The relationship the Diana shares with her employees is nothing more than a mechanical one. By not being social and working together with her employees, she does not know their needs and how they really think of her.

The highest level of the emotional intelligence hierarchy is relationship management. Relationship management is being able to manage other people’s emotions while not letting your own emotions be influenced. Diana fails miserably at this level simply because she is not socially aware of her surroundings. Instead of inspiring her employees to try new things and influencing a bond between them, she leaves them to follow a repetitive schedule and no wiggle room for change. An example of this is when the restaurant experienced high employee turnover. Diana fired three perfectly good employees because they decided to try a new customer service tactic. This proves that she is not in touch with her employees. Diana knows what she wants and understands how to manage herself along with a business, but when it comes to other individuals she does not perform in an effective way. When it comes to being socially aware and being able to build relationships, she fails, and this is one of the most important levels of the emotional intelligence hierarchy.

How can these problems be fixed?

Personality is the view in which individuals are agreeable and open to new things. Looking at the Five Factor Model Personality Theory, Diana extremely lacks in this section because she does not take any steps to build a healthy relationship with her employees. She needs to work on being more agreeable and open to new experiences in order to increase her success as a general manager. When one agrees on situations, it means they are being courteous, good natured, empathetic and caring. She lacks in this because she does not take the extra step to be closer to her employees.

At this point, Diana follows the same rules and regulations, day in and day out. Instead of firing the three employees, she could have been open to a more creative approach and given the new customer service idea a try. In order to be open to new experiences, one needs to be imaginative, creative, aesthetically sensitive, and curious. Diana follows the same routine all the time and should be open to new, and creative ideas that are put forth by her team.

Empathy is when an individual is more open to others feelings, thoughts, and situations. Diana dictates how the restaurant is run along with any changes that may be made. She is so hell-bent with following the rules, that she is not being empathetic to her employees. If Diana opens herself up to
understand how her employees feel, then she will gain miles into training individuals in a positive work environment.

In this scenario, employees seem to have many ideas and comments they would like to express to Diana but she does not listen or respond to them. By acting on comments made from the employees, she will make herself more accepted and a better restaurant manager. If she is open to accept positive and negative feedback, then she will indeed have a better chance at making herself more promotable.

Lastly, Diana has shown that she is a great asset to Cobb Street Grille and losing Diana as an employee will impact the company in a large way. Recommendations that may be given to the company in order to improve employee relations and managerial skills are as follows:

In conclusion, the best alternative for Diana to promote herself and become a district manager is to accept feedback and be open to new ideas for the business. If this occurs, the employees will be able to express themselves creatively and Diana will be able to focus on making her business more successful and accepting. The importance of supporting, being open, and encouraging new ideas will be sure to improve the overall reputation of Diana by her employees. With the right future steps and goals, Diana will be able to gain the proper skills and emotional balance to be promoted as a district manager. 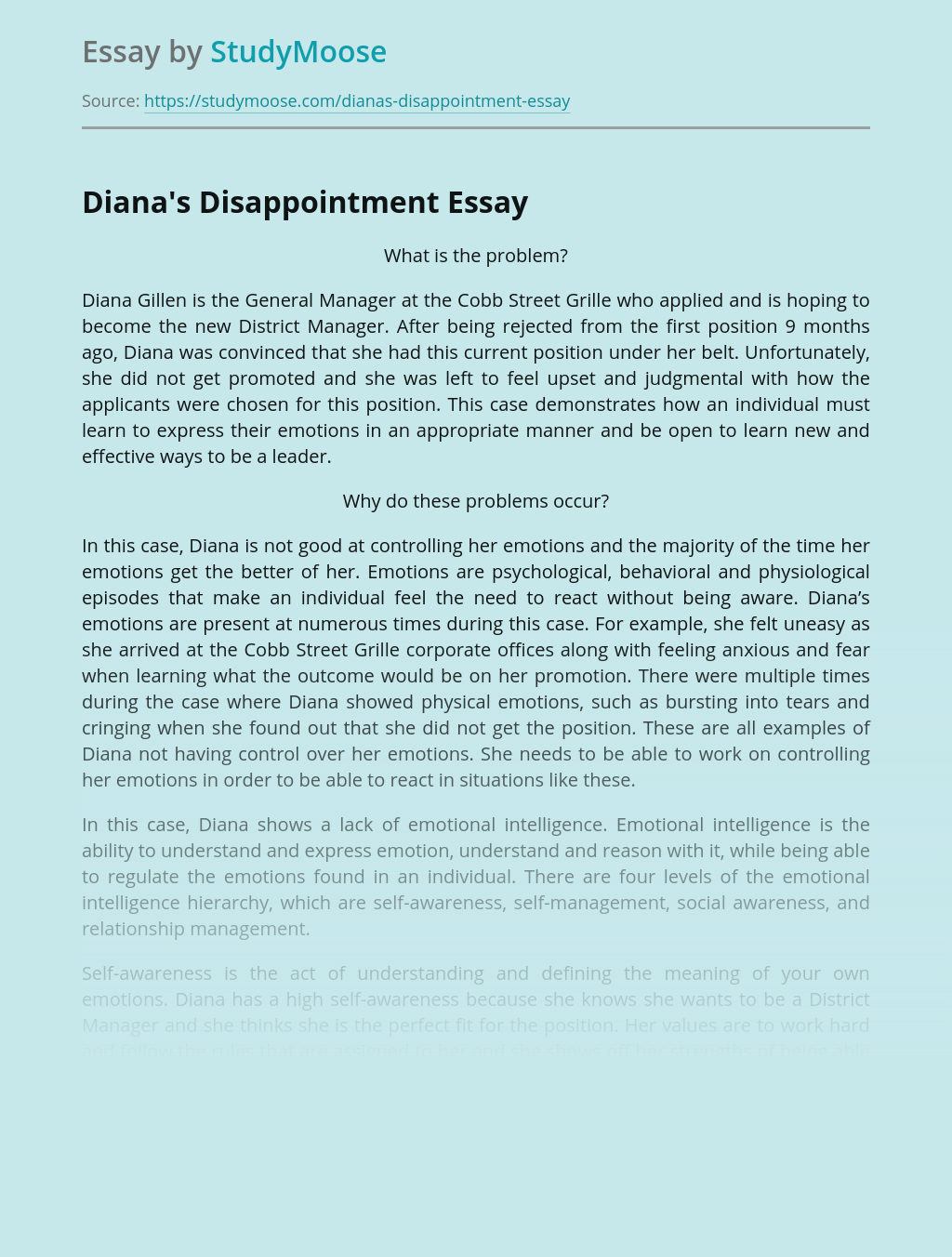 Turn in your highest-quality paper
Get a qualified writer to help you with
“ Diana’s Disappointment ”
Get high-quality paper
Helping students since 2015
Stay Safe, Stay Original