﻿How do Larkin and Abse present the idea of disappointment and loss?

Both Larkin and Abse write poems about disappointment and loss but both having a different idea to how it is presented In ‘Home is so sad,’ by Philip Larkin, the idea of disappointment and loss is presented through a home. The form and structure gives off spontaneous thoughts and written in two quintains and each stanza containing 5 lines. Each line contains ten syllables with a basic iambic metre and containing internal full stops. The poem has a basic rhyme scheme of A,B,A,B,A and contains enjambermont in points throughout.

Don't use plagiarized sources.
Get Your Custom Essay on ﻿How do Larkin and Abse present the idea of disappointment and loss? Just from $13,9/Page

The title in the poem is a bit ironic because ‘home’ is associated with a warm, safe, pleasant place and shouldn’t be associated with sadness. In the first quintain, Larkin writes about when a family leaves the house to go out, “Instead, bereft of anyone to please,” meaning the house feels lost and has nobody to please and “Having no heart to put aside the theft.” The noun ‘theft’ associates with robbery.

This metaphor is that the house has been robbed of people, and not robbed in literal. In the second quintain the poet writes “long fallen wide,” this suggests hopelessness, the term “shot” is an attempt to make things how they ought to be.

Through this poem we can see that Larkin doesn’t associate loss and disappointment with serious matters like family and relationships but a house and objects. However, Abse writes his poems to do with disappointment and loss about serious matters. In ‘A Winter Visit,’ by Dannie Abse, the poet writes about his mum who has now died. The rhyme scheme in the poem goes A,B,A which creates disharmony and is made up of five tursets with three lines. In the first stanza the poet says “neighbouring lights come on before it’s dark” which is a preparation for nightime when it goes dark which would mean a preparation for his mother’s death. In the third stanza the poet starts off with “I would die” which suggests loss and possibility which is then followed by “This winter I’m half dead, son” which signals to us that she is aware death is near. The fourth stanza is then started with a modal verb ‘Yet’ which suggest certainty that the poet can’t cry at the situation and then continued with parenthesis “(although only Nothing keeps)” which shows that everything changes. These show disappointment and loss because Abse is aware of his mother’s death and understands that his mother has come to terms with it but wants to stay strong for her sake.

Which then goes on to describe “white coat not a black” the poet has deliberately stated ‘not a black’ because black is the colour associated with death and would be the ideal colour under these circumstances but the poet is wearing white because he is a doctor but he isn’t behaving like he’s at a funeral. The poet then goes on to finish the fourth stanza with “even here – and am not qualified to weep” meaning Abse is qualified as a doctor but isn’t qualified to cry in this situation, which a doctor is a job associated with death every day. In the last stanza we get the sense of disappointment when Abse writes “approximate things” which is something that is not specific when you’re talking generally, but meaning he doesn’t know how long she has left so he is avoiding the issue. Through this one poem we can see that unlike Larkin, Abse writes his poems with the themes of disappointment and loss about serious matters to do with family and beloved members to him which actually have a point.

However, in ‘Reference Back,’ by Philip Larkin, he starts to use the theme of disappointment and loss but writes about a serious point, his mother. But to no surprise, we get the negative view as usual through his poems and his negative style of writing in his poems. The form and structure of the poem are made up of 3 stanzas; a sestet, 9 lines and 7 lines. The fact this poem has no usual symmetry creates a sense of disharmony which is unsatisfactory. The rhyme scheme is A,A,B,B which is made up of rhyming couplets and some half rhymes which brings regularity to the poem, and filled with enjambermont “you / looked so much forward to”. In the first stanza we get the repetition of the term “unsatisfactory” which is not positive as visiting his mum is becoming a bit of a chore to him and he doesn’t enjoy it. This is then followed by “Played record after record” which is almost like a routine and does this instead of communicating with his mum but does it “idly” meaning he put no effort in.

The adverbial of place “Wasting my time at home” is juxtaposition and “you looked so much forward to” meaning his mum looked forward to it. This presents the idea of disappointment because Larkin isn’t entirely happy about having to go and spend time with his mum before she dies which any normal person would be happy about spending time with family and having memories whereas Larkin feels as though it is a chore and has no choice that he is ‘wasting his time.’ In the second stanza at the end, we get an oxymoron “unsatisfactory prime” which means he is unhappy ‘unsatisfactory’ but prime means positive. However, in the last, third stanza, we get the sense of disappointment mainly about memories for the future and in the past. Larkin starts off with “our element is time” meaning you can’t escape time no matter what and they are “not suited to the long perspectives /open at each instant of our lives.” This shows a point of view and that the poet is not comfortable for them to look too far ahead because he knows his mother will pass away and doesn’t want to look back on memories due to a broken home and being full of disappointments.

We get the sense of loss in the last few lines through the plural noun ‘losses showing he had a boring life and the adverb ‘blindingly’ meaning you don’t see reality. Larkin then goes on to end the poem with “By acting differently we could have kept it so” which tells us that you can never keep the same no matter what you do. Through these three poems we can clearly see that both poets use the themes disappointment and loss in different ways and both with different views.

﻿How do Larkin and Abse present the idea of disappointment and loss?. (2016, Mar 07). Retrieved from https://studymoose.com/how-do-larkin-and-abse-present-the-idea-of-disappointment-and-loss-essay 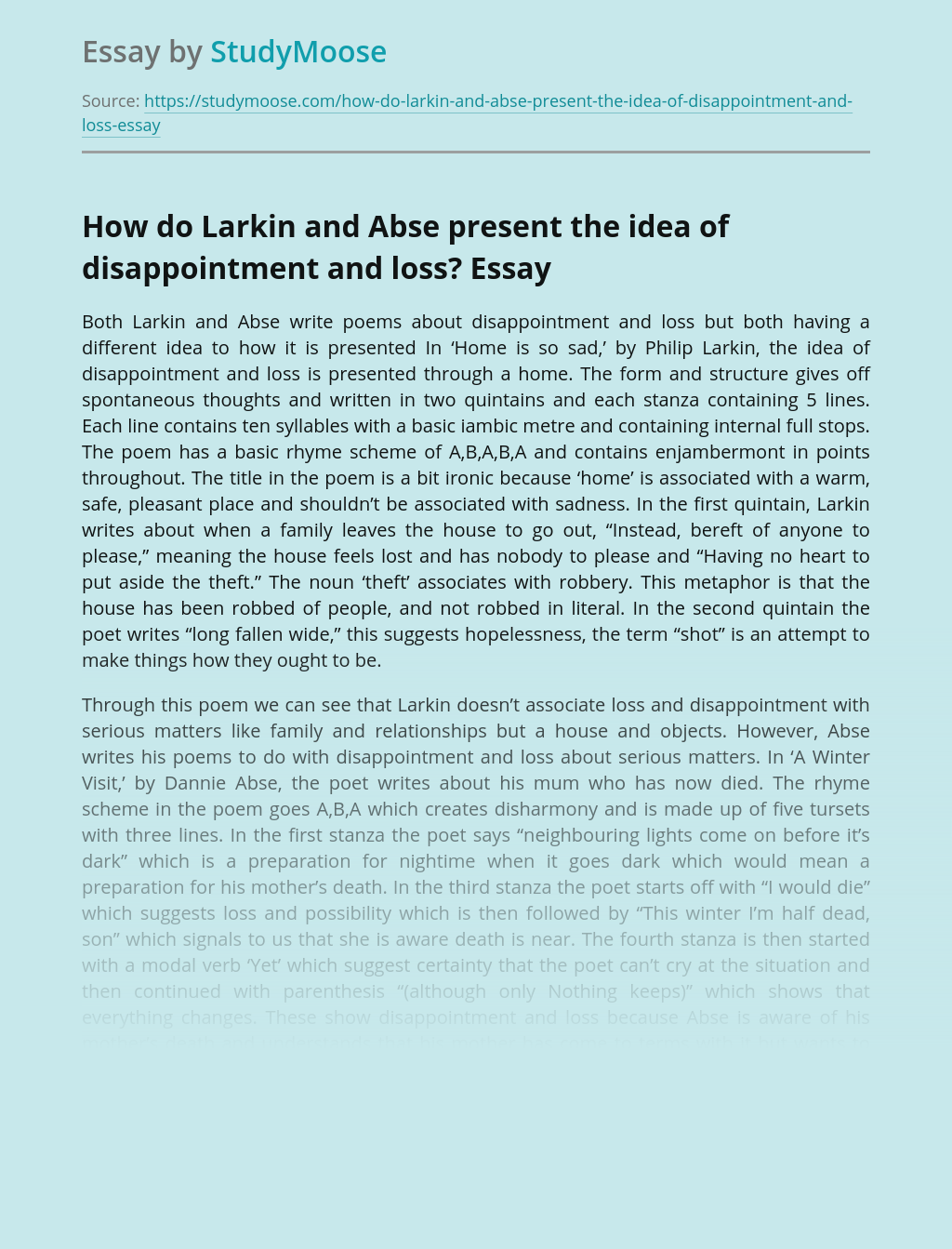 ﻿How do Larkin and Abse present the idea of disappointment and loss?

It may be natural instinct for men to be attracted to a good-looking woman or one who displays more than the usual amount of skin in public. The level and type of attraction varies from one male to another. However, more often than not, the primary expectation or fantasy of the male admirer regarding the...

When a story is trying to influence readers of the author’s way of thinking, there are several ways to convince the reader that the viewpoint is the right thing to do ? capturing the reader’s sympathy with detail examples and facts, and the author’s tone leaving the reader teary-eyed with compassion way long after the...