Respect Towards an NCO

Respect is an important value in any professional organization, especially in the military. Giving respect to an NCO is an important role as a soldier in the United States military. NCO’s have earned the respect throughout the years of service given. Also, by proving to their chain of command that they have the ability to lead soldiers both on and off the battlefield. They have gone to schools and put in the hard work that is required to lead soldiers by mentoring them.

Don't use plagiarized sources. Get your custom essay on
“ Respect Towards an NCO ”
Get custom paper
NEW! smart matching with writer

Not only about the military aspect of their lives but also their personal lives.

The most important reason to show respect to an NCO is that we are able to keep our attention on the mission at hand instead of having a horrible breakdown in communication in the heat of battle. Another, just as important, reason to respect an NCO is that without respect there would be no discipline. Baron Von Steuben was the first to recognize to that in order to have a successful military we would need to put into effect certain values, one of which was respect for NCO’s.

And so you see when you have respect between soldiers and NCO’s and there is no breakdown in communication then we are less vulnerable to attack. (1)

Army leadership begins with character, the values and attributes that shape what the leader must BE. Army leaders must demonstrate exemplary conduct in their professional and personal lives. They adopt and internalize the Army Values and develop the requisite mental, physical, and emotional attributes of a warrior.

Additionally, the ambiguous nature of the operational environment requires Army leaders to know themselves and deal with circumstances as they are, not as they want them to be. (2)

Not only should you respect NCO’s and anyone in the chain of command but everyone around you at all times. It would be in your best interest to be cognizant of your surroundings and watch what you say around others. If an individual finds what you have to say disrespectful then they have the right to file a SHARP complaint which could lead to disciplinary actions from your chain of command. SHARP ( Sexual Harassment Assault Response and Prevention) deals with the lack of respect to fellow soldiers and civilians alike. To prevent SHARP complaints one should respect oneself and treat others like how you would treat yourself. We must consistently enforce all policies related to sexual assault and harassment. We must execute prevention policies, training initiatives, and education programs; in order to get on top of any incident. (3)

Respect towards NCO’s is one of the Army’s most important values because it could prevent any failures in communication between the soldier and the NCO. If there is no respect then there would be no discipline within the junior enlisted. To an NCO they are a leader and to be a leader they must live and be the Army values. When a soldier starts being disrespectful to their NCO’s, anyone in their chain of command, or anyone those people can file a SHARP complaint against the soldier. The only way to not get SHARP complaints is to be mindful of your surroundings, be careful of what you say, and to respect yourself and others.

Respect Towards an NCO. (2016, May 30). Retrieved from https://studymoose.com/respect-towards-an-nco-essay 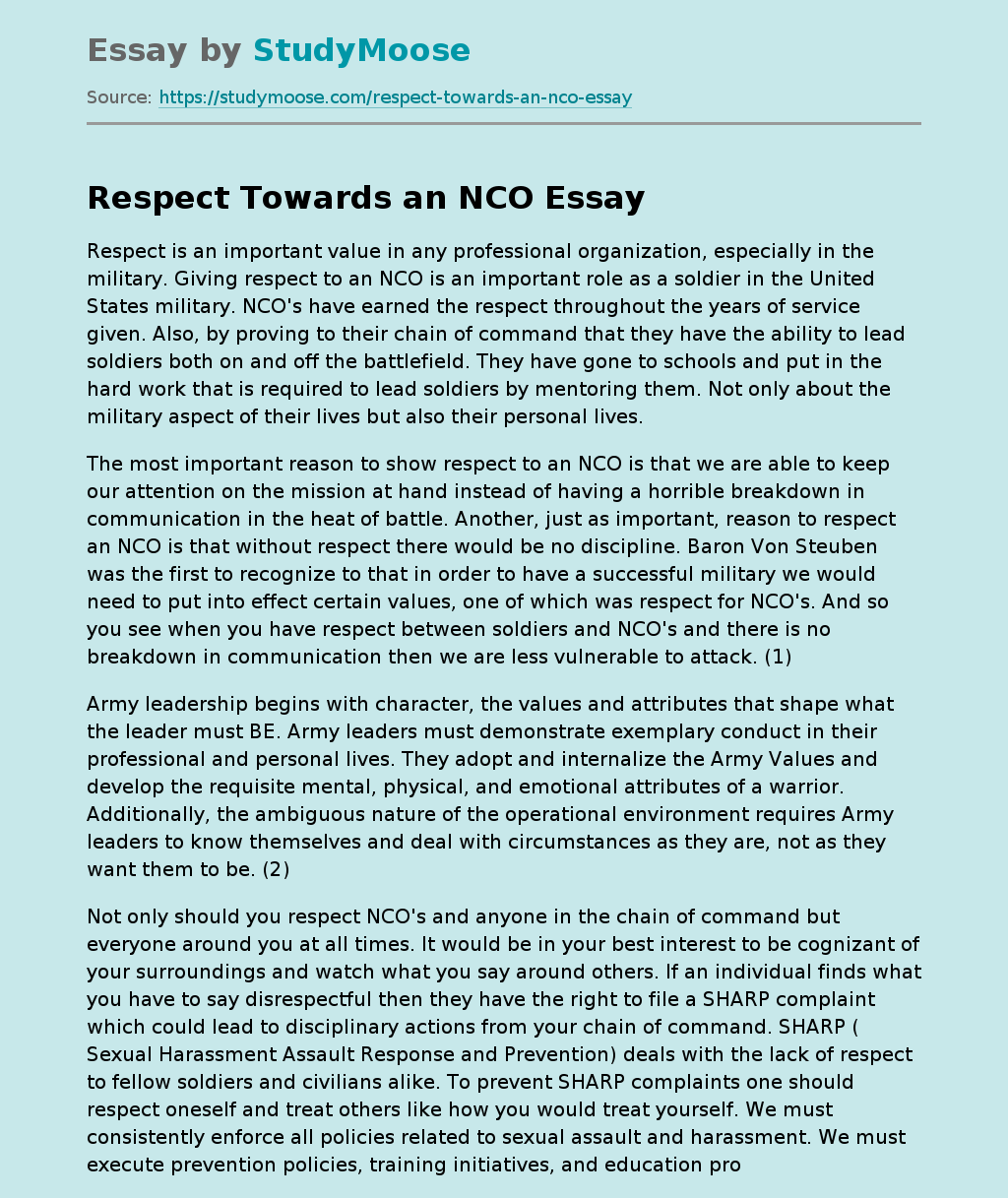