The only time I went to National Museum was when we were required visiting and taking a photo of the manunggul jar, as part of our historic appreciation in our History subject. On July 26, 2013, my peers and I went to National Museum to see antique and prehistoric things about the early times. I feel humiliated and embarrass for not visiting a museum while I find time to go to arcade doing nonsense things.

I didn’t know that there are two museums, but we were informed by the guard on duty when we went to one of these museums that there is only one museum.

Don't use plagiarized sources. Get your custom essay on
“ Reaction paper about National Museum ”
Get custom paper
NEW! smart matching with writer

However, the main museum is actually the Museum of the Filipino People located in the former Department of Finance Building. And the National Museum that we know is currently called the National Gallery of Art, which is an extension of the museum.

With a wage of 50.00 per head, me and my comrades were mesmerized and was amazed by the beauty of the systematize preservation of the ancient items inside the museum.

We were instructed to leave our things in a room. More like a baggage room. And bring with us important things like gadgets and wallets. It is not allowed to use pen inside the galleries. However, a pencil is accepted. We were escorted by a steward which we can ask questions regarding some information about the entities inside the gallery. I was very startled when we walked by to the first gallery. The colonnade is about the Treasures of the San Diego: The Wreck Site, wherein we feel fascinated by the different survived apparatuses in San Diego.

We saw their defensive weapons which included the breastplates, leather doublets, shields, and protective helmets.

Also, we saw the offensive weapons for hand-to-hand combat like daggers and swords. With 27 steps in the stair, we reach the second destination. The second gallery was composed of different things in the Philippines and Southeast Asian Contacts. There, we were quenched by thirst of excitement when our eyes lay upon the manunggul jar. Because finally we were able to take a picture . End the goal in this visit. But to be able to redeem the payments, we continued the voyage. I am so captivated about the artifacts. I have also seen a pitzel and some types of kettles. It has a smooth texture. We have also seen vessels and basins. Plates from the Chinese people during the barter period were also displayed in this part of gallery. Like the first gallery there are some armors and weapons.

We saw different types of jars in their different, styles, shapes, sizes and designs which enthrall my feelings. Some paintings hung in the wall allure me. It somehow brought different charisma to me. These paintings are about the Philippine culture during the Spanish era. My eyes were magnetized by the piece of metals that later I discovered to be elements like a piece of copper, gold,lead, and silver. The different types and sizes of teeth entice me. In this part of the gallery I was able to see some portraits of voyagers and colonizers with their works like Morga and Magellan. I was stunned when I saw the different insects like butterfly, grasshoppers and lizards in their different sizes and looks. But what surprised me most is the lizard with wings, later I learned that this insect was discovered by our National Hero, Dr. Jose Rizal.

There are also some types of crabs. Shells are also spectacled in this gallery. With 24 steps upward the stairs; we are already on the colony of our third journey. We were greeted by the astounding different objects that were conserved in the gallery. Jars- the first object who welcomed us. Different kinds of jars like Spanish jars, Siamese jars, Dragon jars, Martaban jars, Brown-glazed jars from Thailand and etc. There was this sculpture or something like a exhibit of a true-volcano in this part of gallery. I was so wow because of the artisticity of these thing. There was also a painting of how the Cagayan people catch food by hunting wild animals and fishing. I feel a little bit scared when I look at the skullcap of a Tabon woman. I sense I was back when I saw the paraphernalia during the time of gardening. I was staggered by the ships and things for the water usage hung on the wall. There were also some kinds of weapons like bow, arrow, bolos, and sharp things.

I wondered for what the map when we passed by. I was amused when I later inform that you press the button, the place where the light appeared is the place where you can find jade, carnelian and glass. The great thing was the Philippines is one of the luckiest country who possesses this luxury goods. I was staggered by the architectural type of structure about the early Filipino type of habitation. Again for the third time, I saw collections of jars, plates, and bowls. There was also an exhibit of the destroyed ship. It shows how they find some things on this wrecked ship. With 24 steps we entered the fourth gallery naming Don Vicente Gallery where we have seen the dresses and clothing of the Filipino.

Their ornaments and things for beautification. We saw musical instruments like gongs, flutes, xylophones, and stringed instruments. There was also wallpapers about how the ancient Filipinos’ education. I was enchanted and was feeling excited about entering a huge exhibit of a kubo gallery . I was careful in walking because the floor is slippery. However, I still enjoyed the gallery for it reminds me that Filipino culture is still the best among all. Gallery 5 is still close because of some renovation. I received an information that gallery 5 is about the modern technology.

Going to the National Museum is a experience that I would never ever forget. This place reminds me of who I am and where did I come from. This shows how the ancient people survived in the early period. How their living was and how aggressive they are when it comes to merchandising things. I feel am again baptize not as a Catholic but as proud citizen of the Philippines. This serves as the evidence that it is truly more fun in the Philippines!

Reaction paper about National Museum. (2016, May 05). Retrieved from https://studymoose.com/reaction-paper-about-national-museum-essay 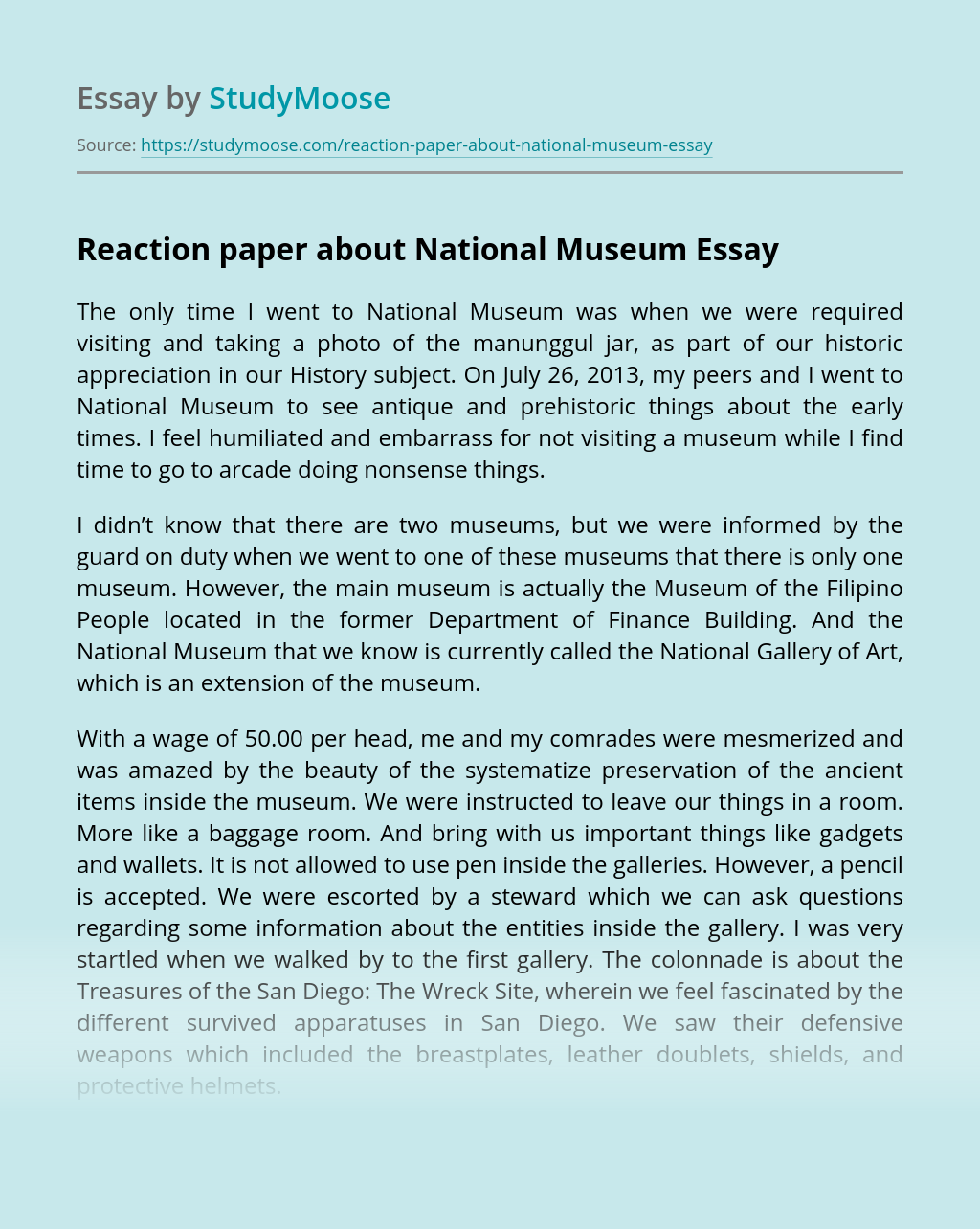