What a blast from the past. September 5, 2013 a date to remember, another great day in my life. This was the day I and my two block mates went and visit an institution. The institution devoted to the procurement, care, study, and display of objects of lasting interest of the country. Significantly, this institution is like a trophy to all Filipinos, a triumphant trophy of strong and vigorous mark of an extraordinary history, this is the National Museum of the Philippines. When I was in grade school and high school, I’ve been to the National Museum for several times already, because of our Field Trip.

Thus, I am so happy and excited when our Professor in Philippine History told us that one of our requirements is to visit National Museum and be able to pass a reflection about the Museum, because it’s about time to reflect and appreciate more of the country’s history and treasure. I used to conduct researches before I go to a place like National Museum, because I believe that it’s not enough just to visit places like such without any prior knowledge or interest about the place, I think being a little cognitive would do, for we can appreciate more of the place.

In my research I have learned that, the National Art Gallery was originally designed as the public library by Ralph Harrington Doane. In 1918, the construction begun and was suspended for several times due to lack of funds. Later on, the building was decided to be used by the legislature.

Revisions of the plan were done by Juan Arellano.

The building was inaugurated on July 16, 1926. Costing only four million pesos, in the mid-1996 the Senate of the Philippines moved out of the building. In 2003, the renovation started to transform it into National Art Gallery of the national Museum. Before entering the museum, you’ll see two sculptures done by the artist Guillermo Tolentino. They are the heroic monuments of Manuel Quezon, former Senate President; and Sergio Osmena, former Speaker of the House. When I entered the door there was a feeling of excitement and something mysterious. Something that holds my breath and whispers in my ears saying, “This is your country, this is Philippines”. As if I am about to see the past of my country, accounts of its history that were untold. There are different rooms/halls inside the museum. Each caters to different artists, artifacts and historical pieces.

One of my favorite in the rooms is the Hall of Masters. “This room is dedicated to the 19th-century Filipino painters Juan Luna and Felix Resurreccion Hidalgo who achieved prominence at the 1884 Madrid Exposition. Luna’s Spoliarium received one of the three gold medals and Hidalgo’s Virgenes Cristianas Expuestas al Populacho (Christian Virgins Presented to the Populace) received one of the fourteen silver medals” I’m not the artsy type, but this Juan Luna painting is definitely the first and only painting that evoked such strong feelings in me — desperation and hopelessness in a gigantic package. I first saw it in high school, but seeing it as an adult never dimmed the effect it had on me everything else pales in comparison. I hope treasures like this will be forever ours.

Another favorite of mine is the Amorsolo Gallery. In my researches I found out that “Fernando C. Amorsolo, named National Artist in Painting in 1972, was the first Filipino to ever be given that distinction. He was also called the “Grand Old Man of Philippine Art” at the inauguration of the Manila Hilton’s art center, where his paintings were exhibited, on January 23, 1969. His works covered a wide range of subjects, but he was best known for his idealized female images of the dalagang Filipina. He also painted scenes of traditional Filipino customs, fiestas and occupations, and series of historical paintings on pre-Colonial and Spanish Colonization scenes. He preferred to paint in natural light and developed the backlighting technique, which became his trademark. ” Other galleries includes the Arellano room, dedicated to the prolific-painter Juan Arellano, who is also one the architects of the building. The Beloved Land, “This room introduces the scope of the history of art in the Philippines through a timeline.” The Vessels of Faith, “This room presents the various expressions of Philippine spirituality.” The Hall of National Artists for the Visual Arts, “This room is dedicated to the visual artists who have been named National Artists by the government.” The Freedom Yearned For, “This room expresses the theme of struggle of Filipinos against colonialism and the forms of oppression that persist to this day.”

Across the National Art Gallery building is The Museum of the Filipino People. It houses the Anthropology and Archaeology division. The Museum of the Filipino People houses different exhibits from the origin of the islands of the Philippines up to the arrival of the Spaniards. The building formerly housed the Department of Finance. The National Museum of the Philippines is like the country itself, the Philippines is a place of beautiful and fascinating sites, a place of serendipity, a place with much resources Philippines is truly a place like no other. But what we did, and what we are still doing are abusive and deteriorative manifestation on our God given gifts. Likewise, the National Museum is place of beautiful and fascinating works of art, a place of mystery and treasure, a place of told and untold chronicles of our land. But just like our country we express less care. That is one of my disappointments when I visited; I only saw some of the galleries, for the Museum is under renovation. If I am not mistaken that renovation plan is for years already. I asked one of the staff who guides our way into the galleries, “Is there any leaflet that the Museum is giving to the visitor?” the staff replied “None sir, because the Museum has no budget with that.”

What the heck. Our history, the evidences of the great journey of the country were located there, yet we don’t give enough care and love on that institution. I have entitled my reflection “An untold Chronicle through Art (The Pearl of the Orient)” Because it’s so amazing and mind blowing, to think that through the paintings and sculptures, clothes and silks, structures and literature our ancestors creatively made our history engraved on our minds and especially on our hearts. And “The Pearl of the Orient” because, it is the Philippine itself, the reflection and mirror of our country, of our past and it’s in the hands of the present to ceaselessly preserve its beauty. At the end of the day, I realized that I’m so lucky and blessed to have such wonderful history as a Filipino. The National Museum of the Philippines is the Philippines itself, the story of the Filipinos. Substantially, it is already engraved and will forever be engraved into my mind and into my heart that I am a Filipino, I am proud of my story, and I will keep my blazing heart to ignite with love and care to my country.

The First Mass at Limasawa
by Carlos V. Fransisco
Model for the Commonwealth Triumphal Arch
by Guillermo Santos 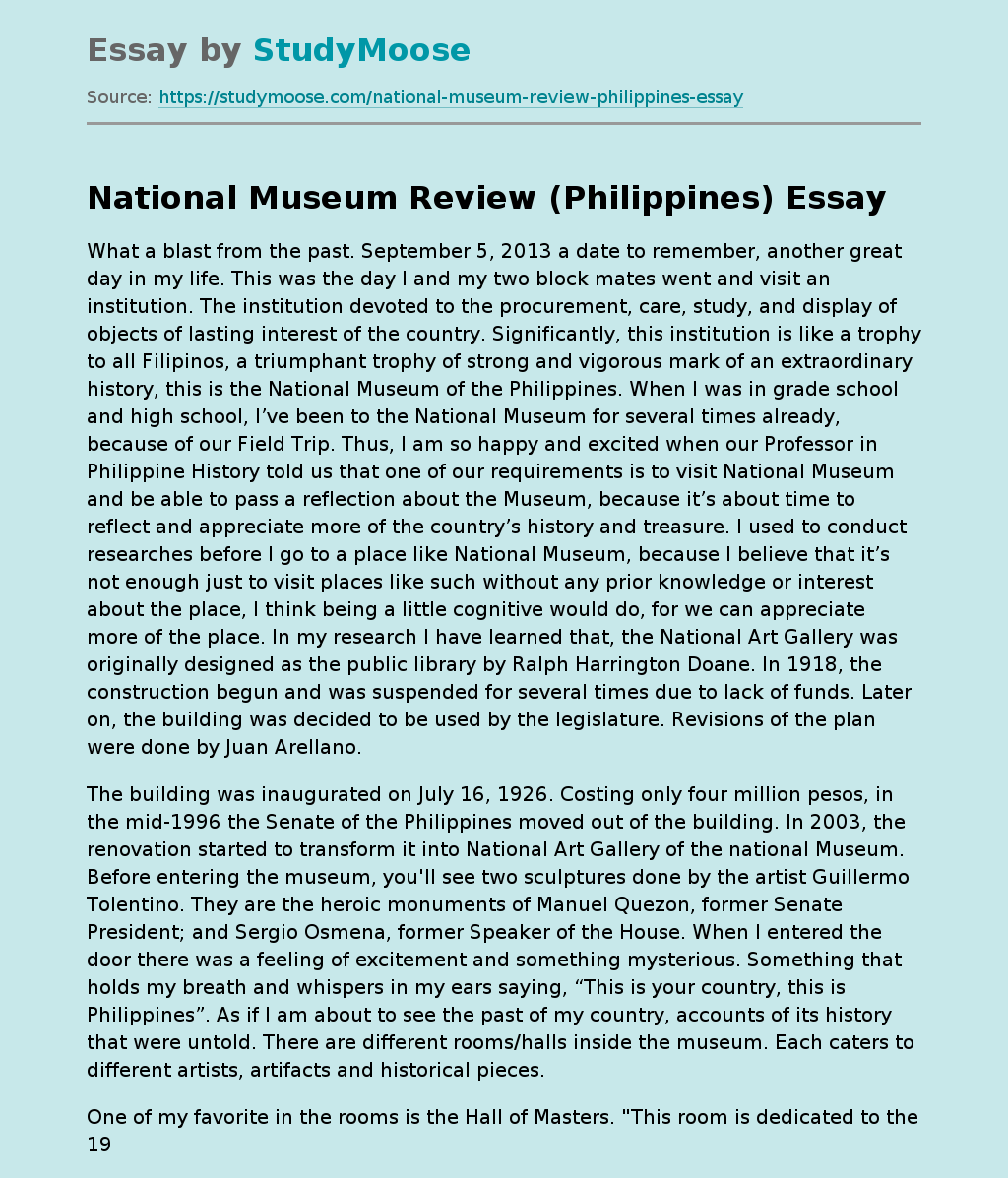