Who and what made Rizal our foremost national hero: Reaction Paper

Evaluation of the Group

Renato Constantino, wrote the Veneration without Understanding for him to convince Filipinos having doubts on Rizal being the national hero. At the very beginning, he immediately compared the Philippine hero to many nations in which he explained their heroes were leaders of the revolution and ours was adjacent to such revolution: Washington – United States, Lenin – Soviet Union, Bolivar – Latin America, and others. In fact, he described Rizal as repudiation towards Bonifacio who is the leader of the revolution and the one fighting for the country’s liberty.

Don't use plagiarized sources. Get your custom essay on
“ Who and what made Rizal our foremost national hero: Reaction Paper ”
Get custom paper
NEW! smart matching with writer

Making his argument stronger, he added the Americans entry to the country. William Howard Taft was the person, who suggested that the Philippines should have a national hero. Chosen contestants were in the candidate of being selected out of these were Bonifacio, Aguinaldo, Del Pilar, Mabini, Luna, and others. Choosing Rizal was supported with three different Act no. – 137, 243, and 346 whereas described to be honouring a province named after him, erection of his monument, and his death as a day of observance.

Proficient in: Our National Hero

These are some of his different arguments that stamped into the group’s mind. Nearly a half of our group was convinced of how Constantino presented his data. One of us even said, “He was a voodoo doll casted on us Filipinos by the wickedness of Americans.” As our professor stated, indeed he was very convincing – but if one knows Rizal so well, an individual will think Constantino’s work is ridiculous. In the end, Constantino was marked as having his own standards of having a hero.

His data was not based on facts. The heroes he mentioned, he didn’t even bother to delve deeper. Finding out, Washington was a rich man – owning plantations and even slaves. Rizal had nothing compared to what Washington had but his family and attainment of such high degree of education. Americans did not choose the province to be named Rizal, it was a Filipino native who initiate the name of Rizal to be used at thus was approved by the States. In addition to this, the death of Rizal was known to be celebrated even before the Americans arrived – Emilio Aguinaldo had set the day to an observance.

Lastly, Rizal was not the person needed by the Americans because he was a good model of anti-thesis of revolution, he is not a puppet used to lure us, not a piper to hypnotize us – he is respected to be the hero of our heroes. Yes, indeed, he inspired many of our heroes and they consider themselves a saluting person to Rizal. After stating some facts in contrast to Constantino’s argument, it was as usual – many of the members believed once again that Rizal was a just hero of the country. As Esteban A. De Ocampo stated in his work: Who and what made Rizal our foremost national hero, he stated that no one can surpass the things Rizal did. Each one of us knew from the beginning what Rizal did for the country, his works, and other contributions to societies. However, what we didn’t see was that he was more than that; he was a selfless being.

He abandoned his childhood and entered maturity at an early age, abandoned his personal interests, and he chose to be serving the Filipinos rather than enjoying his life with friends, women, and family. Upon reading this literary work relating to Rizal, it made us realize – he was someone really deserve to look up to. Indeed he was an ordinary person, but what made him extraordinary was that he made the best out of his living serving the citizens. A member of our group stated maybe he had a calling for the Filipino people that until his last breath, all he did was to inspire the Filipinos. These two readings have different goals to set in the minds of the readers. As students, observed in our group – a lot are being flown by the current when arguments can really persuade them. Maybe this is our standing in society; we are the learning ones who set our beliefs on the statements of others.

Who and what made Rizal our foremost national hero: Reaction Paper. (2016, Apr 22). Retrieved from http://studymoose.com/who-and-what-made-rizal-our-foremost-national-hero-reaction-paper-essay 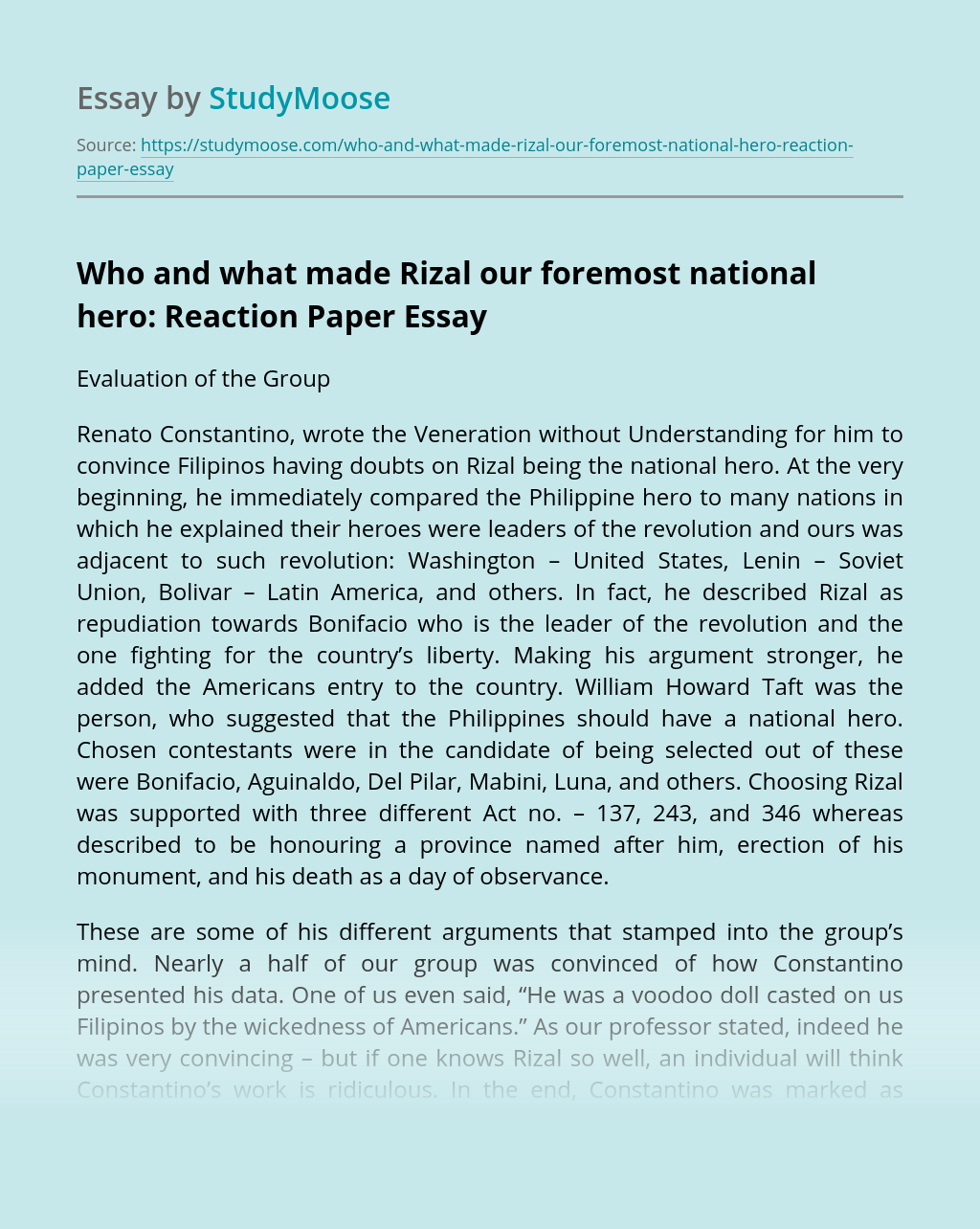