Rationalist and empiricist philosophies: Arguments by Hume and Kant

Immanuel Kant deduced the harmony between rationalism and empiricism. His form of philosophy is sometimes called “Copernican revolution of philosophy” emphasize its novelty and importance associated. But after Kant, there could be no discussion of reality or knowledge without any rational awareness about the role of the human mind that constructs reality and knowledge.  In the end, it was the termination of the age old debate between rationalists and empiricists and finally it was the epistemology which went in a new direction.

Don't use plagiarized sources. Get your custom essay on
“ Rationalist and empiricist philosophies: Arguments by Hume and Kant ”
Get custom paper
NEW! smart matching with writer

Plato, Descartes, Spinoza and Leibniz have been the philosophers with rationalists’ paradigm. Some of the highlights of the rationalism are:

Not to trust senses and some of the times they deceive as the knowledge provided by them could be inferior because of its changing.
By reasoning only, knowledge could be achieved. Paradigm of real knowledge could be derived out of Math.
The concepts behind self and substance and identity have various explanations and forms like Plato’s Forms, or Descartes’ explanations.

The self has been pictured as real and can be seen as the very outcome of an immediate intellectual intuition.
The ground behind any moral notions should be something that stands external to self. It could be in any external form i.e., some supernatural entity or God.
But as per Kant says rationalists are almost right when above mentioned points (3) and (4) are considered while he found (1) and (2) as wrong perception and wished for point (5) to be true.

Aristotle, Locke, Berkeley and Hume have been the philosophers with empiricism’s paradigm.

Some of the highlights of the empiricism are:

The ideas are derived from abstraction irrespective of those being general or complex.  There is nothing called absolute or innate.  As per Hume, there is no self as there is a total lack of immediate intellectual intuition. The sensations or human senses also doesn’t support the institutions of “Self”.

There is no certain relation between future and past or the notion of any resemblance between future and past is non-existent. Hume states that there is no connection between causes and effects and at the same time this connection is not supported by sensations.
Feelings are perhaps the only source of morality. Existence of something is quite obvious and hence doesn’t form any necessity.
As per Kant, empiricism has paced itself on the right track over point (1) and is almost right on point (2) but totally wrong when points (3), (4), (5), and (6) are taken into consideration.

Behavior and performance of the human minds is limited by scope as its capacity to imagine and derive is limited to the constraints. The constraints that come into existence can be synthetic as well as a priori. These constraints in simple language could be the location which considers space and time as reference, causality, experiencing and understanding self, materialness, self identification, and various related as well as other mathematical notions.

The most engaging aspect of Kant’s philosophy has been the existence of two worlds; one based on perception while other on reality. The conceptualization and arguments between the two worlds we experience revolves around being phenomenal (apparent) world and the noumenal (real) world.

The phenomenal world can be understood by the explanations of empiricism. It is a world that relies on observable entities. It circumcises things that are publicly observable while following explanations from science and laws of physics. There is no existence of God, actual freedom, soul and values.
The existence of God, freedom, souls, and values can only be experienced in noumenal world and can’t be understood through the limitations of ordinary world.

The claims of completeness by both rationalism and empiricism have been refuted as there can’t be any philosophical effort documented enough to cover all aspects of life and world. Rationalists’ philosophy stating that there is nothing to trust senses are as wrong as the claims of empiricist who says that it’s the senses we have as a source of information and knowledge.

Rationalist and empiricist philosophies: Arguments by Hume and Kant. (2016, Sep 29). Retrieved from http://studymoose.com/rationalist-and-empiricist-philosophies-arguments-by-hume-and-kant-essay 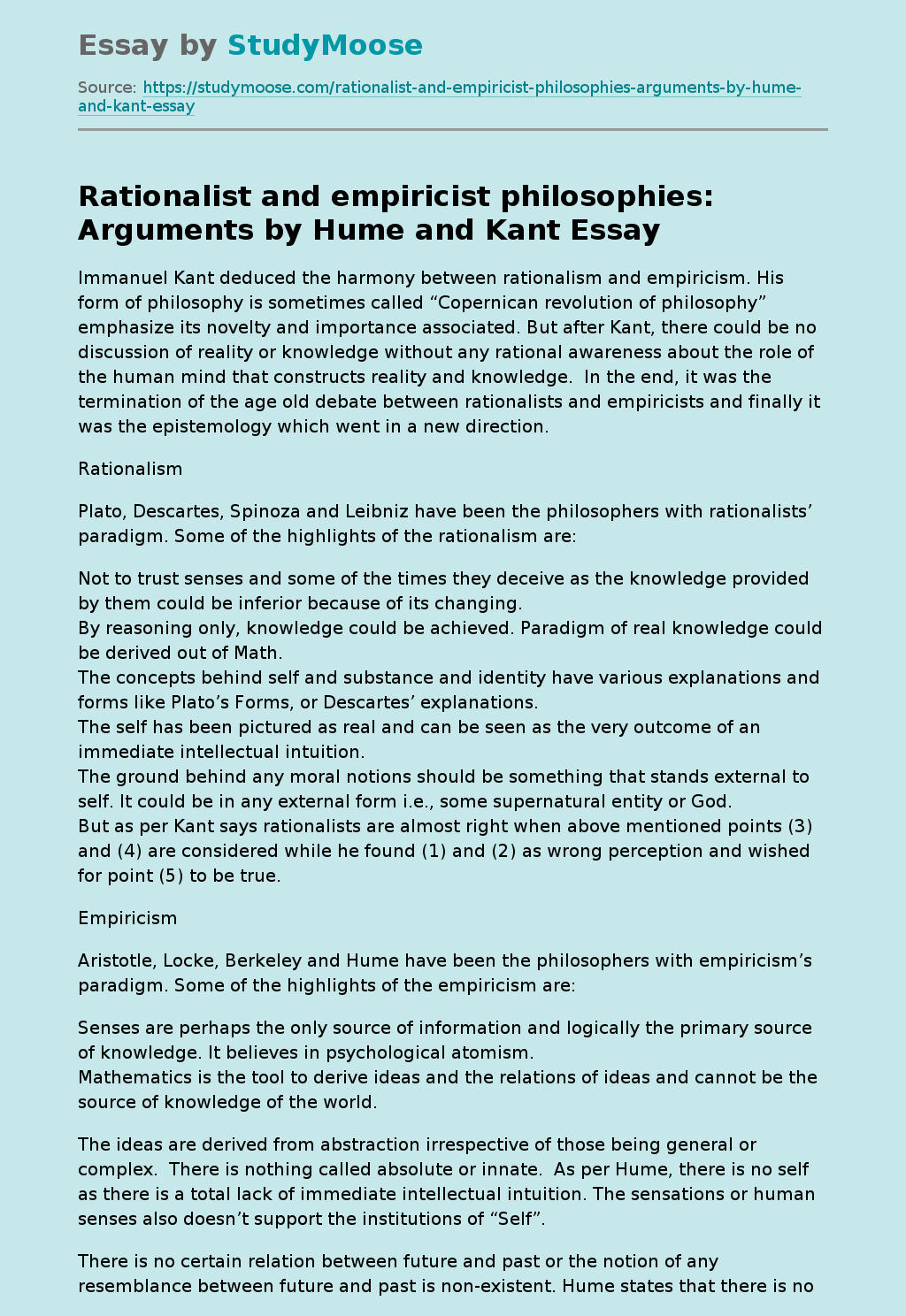