They’re many different biased opinions related to the topic of public policy and gun control. Many would argue that gun control doesn’t follow public policy in a “normal” route. “Normal” being shocking incidents or crises that draw public attention and media coverage which in turn draw a debate on one or more aspects of the issue wither it be a philosophical, regulatory, constitutional, or technical aspect. Following this, investigations that would result in an actual change in public policy to further prevent or at least deter another reoccurrence of this action.

Don't use plagiarized sources. Get your custom essay on
“ Public Policy and Gun Control ”
Get custom paper
NEW! smart matching with writer

The shooting of Unites States Rep. Gabrielle Giffords and the massacre at the Aurora, Colorado movie theatre are two examples of incidents that should have led to the investigation of the downside of the current public policy with gun control. The debate of deciphering the 2nd amendment has and will always be an ongoing debate. While various federal laws have been enacted since 1934 to promote the regulation of firearms, each fifty states still have different laws according to the severity of restrictions condoned by citizens, and placed by the legislators.

They’re then the plethora of laws that decipher the use and possession of these firearms. While the first law regulating gun control in 1791 and also the law that gains final ratification is the 2nd amendment in the Bill of Rights that states, “A well-regulated militia, being necessary to the security of a free state, the right of the people to keep and bear arms, shall not be infringed.

This also being the most argued and construed law of them all. Later in 1837 Georgia passed a law banning handguns. It was soon thrown out as being ruled unconstitutional.

In a reaction to emancipation in 1865, several of the southern states adopted what is known as “black codes” which among many other things, ban black persons from possessing any firearms. The National Rifle Association (NRA) was organized in 1871 with a primary goal of improving the marksmanship of American Civilians for the preparation of war. In 1927 the Congress passed the law banning the mailing of concealable weapons. The National firearms Act of 1934 which is approved by congress that regulates only fully automatic firearms.

The Gun Control Act of 1968 bans persons convicted of any non-business related felonies, persons found to be mentally incompetent, and users of illegal drugs the use or ownership of firearms. This act also regulates imported guns, and expands the gun-dealer licensing and record keeping requirements. It also places specific limitations on the sale of handguns. In 1972 the Bureau of Alcohol Tobacco and Firearms is created with a mission to control the illegal use and sale of firearms and the enforcement of Federal firearms laws.

Five years later in 1977 The District of Columbia enacts an anti-handgun law which also requires registration of all rifles and shotguns within The District of Columbia. 1986, the Armed Career Criminal Act (Public Law 99-570) increases the penalty for the possession of firearms by persons not qualified to own them under the Gun Control Act of 1986. Also in 86’ the Firearms Owners Protection Act (Public Law 99-308) relaxes some restrictions on gun and ammunition sales and establishes mandatory penalties for the use of firearms during the commission of a crime.

In 1994 the Brady Handgun Violence Prevention Act (Public Law 103-159) is passed which imposes a five day waiting period on the purchase of a handgun and requires that local law enforcement agencies conduct background checks on purchasers of handguns. ATF’s) Brady Law web-site). Also in 1994 the Violent Crime Control and Law Enforcement Act of 1994 (Public Law 103-322) is passed which bans all sale, manufacture, Importation, or possession of a number of specific types of assault weapons. In 1998 the newly created National Instant Criminal Background Check (NICS) computer system is now required to be used by gun dealers due to the permanent provisions of the Brady Act. 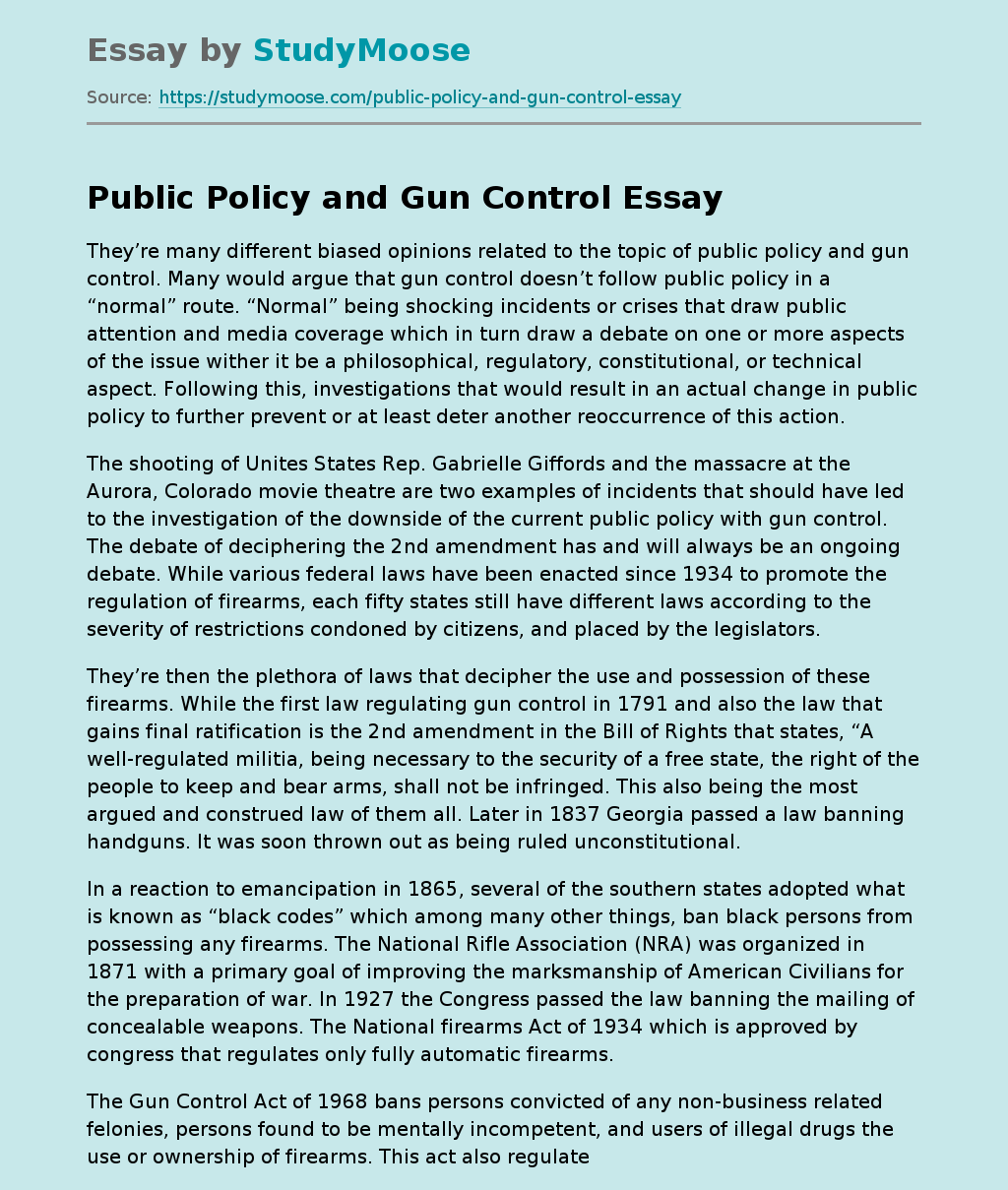