Policing in the United States has taken on many different forms and facets in the past 50 years. Although, various modes & models of policing styles continue to be introduced, two main aspects of law enforcement have remained constant, (traditional policing & community oriented- policing). There are so many different facets, trends, and new emerging technologies in the wide world of law enforcement. First, we will outline a brief history of the origins and evolvement of policing. Special attention will be lent to illustrate the effectiveness of the paramilitary style of dress, loyalty, and discipline in relation to the traditional style of policing in America; casting particular illumination on the organizational structure of the traditional police department.

Don't use plagiarized sources. Get your custom essay on
“ Community Policing vs. Traditional Policing ”
Get custom paper
NEW! smart matching with writer

In addition, the solid, familial bond of brotherhood and sisterhood that exists within the casing of the traditional style of policing will also be presented and explained. Community oriented policing is the second side of policing that we are going to deal with; focusing on its American roots, effectiveness, and future direction of community-oriented policing.

A brief biographical sketch will be painted of the person who many law enforcement researchers and analysts have credited with the implementation of the community-oriented model of policing. His basis, reasoning, and a cross-section of his 9 Policing Principles will also be discussed. The public reaction and relationship to-wards the community-oriented model of policing will also be brought to light. The many triumphs, pitfalls, differences, similarities, and core effectiveness of both models of policing will be contrasted and compared.

The subject of what method or rule is best to use in the protection of the citizens who live, work, and raise families in the United States will more than likely remain a hot-button issue for many years to come.

Depending upon the current governmental administration that is occupying our nations’ highest office, partisan politics play a vital role in how law enforcement precincts across America are funded, staffed, and managed. The prevailing morality views and sentiments of the community-at-large, and what they feel is most important to them, in terms of the main focus of law enforcement in their town, must definitely must be taken into account; when law enforcement agencies are outlining a departmental plan of action.

More community action groups, government watchdog organizations, youthful offender programs, positive, after school athletic activities, youthful offender programs, peer mentor-ship programs, faith-based, community initiative alliances, and law enforcement partnering with the community that it serves, (not just with City Hall and its partisan policies), are sorely needed in cities nationwide. When the law enforcement brotherhood is able to gain a crystal clear understanding of what type of services are needed in the various communities that each individual department serves, then and only then will the proverbial bridges begin to be built. Then healing and reconciliation can finally start between law enforcement and concerned citizens. All of these factors are core essential; to ensure that cities across America are able to grow and maintain a peaceful existence.

Surprising to many, who may think that modern-day policing has its roots in the United States, the original formation and concept for the Metropolitan Police department was started in London, England. Sir Robert Peel, (also known affectionately as, “orange peel”), is credited with creating the first organized police force in 1829; while serving as Home Secretary of England. According to Peel, the true core concept of policing is, “the police are the people and the people are the police”. Sir Robert Peel established nine separate bedrock principles for policing that continue to stand as a road map for law enforcement agencies across America. The first principle Peel outlined in his plan was that, “the basic mission for which the police exist is to prevent crime and disorder”. This could arguably be one of his most important principles. Peel established a force of officers, also known as, “Bobbies”, and, “Peelers”, as they were known, in London.

The new Bobbies were given beats, (particular area a Bobbie would be responsible for). While walking the beat, the Bobbies would interact closely with shop owners, and ordinary citizens. The close proximity of law enforcement in the community established not only an authoritative presence in the community, but also a sense of security for citizens. Bobbies wore dark, professional uniforms that further established their authoritative presence, (the uniforms from the 1800’s are still quite similar to the ones worn by the New York City Police Department).

According to an article concerning the significance of uniforms, Richard R. Johnson, suggests from much research that:The uniform worn by also elicits stereotypes about that human beings status, authority, attitudes, and motivations. The police uniform serves to identify a person as one vested with the powers of the state to arrest and use force. The uniform also serves to establish order and conformity within the ranks of those who wear it by suppressing individuality. The psychological impact of the police uniform should not be underestimated, Johnson, (2005).

This very professional, paramilitary style of uniform worn by most American law enforcement officers is a perfect visual representation of the image that a traditional police officer should portray; one of power, professionalism, and trust.

Building off of the professional concept of serving the public interest through uniform, clear-cut channels, we will explore the traditional police concept. The traditional method of policing, if practiced correctly and efficiently, is an extremely effective mode of operation for any successful police unit. The professional, paramilitary style of dress places the law enforcement officer in the frame of mind that he is a polished professional; and must live up to the image that his uniform represents, on or off the job. The traditional concept of policing also focuses on police administration, (also known as brass), to make most, if not all administrative decisions for all officers in a department or unit.

Contrastingly, the community-oriented side of policing relies very heavily on placing much of the administrative and social duties that were once reserved for upper-level management in the laps of street level law enforcement officers. One of the earliest accounts of active community policing in the U.S. was in 1962 by the San Francisco Police Department; who established a specialized unit of law enforcement officers based on the core concept that, “police would help to reduce crime by reducing despair—- by acting as a social service agency to ameliorate some of the difficulties encountered by minority group persons”, Patterson, J. (n.d.). With the creation of this unit, as officers assigned to this unique unit began to draw closer to the people in the surrounding community, the citizens’ new found relationship with members of this new, community-based police unit prompted some of them to muster enough courage to file formal complaints against regular patrol officers.

While on the one hand, the close relationship with the community was a good thing, the tension that now existed between the community-based unit officers and the regular patrol officers was one of major distrust and constant scandal. The community-based officer program was started to create a balance in community/police relations, but instead, stirred up a huge political mess in the San Francisco Police Department. In any event, the program was discontinued due to the dis-harmony that now existed between these separate sides of the police force. Many times solving one problem only creates a much larger dilemma. Community-policing had seen a major upswing in the 80’s and 90’s; but, departments across America are beginning to realize that the traditional-style of policing is one that commands the most overall respect from citizens.

In closing, as law enforcement technology continues to increase at an almost feverish pace, the styles of law enforcement, (although slowly evolving), will basically remain the same. It would probably be safe to say that many police departments across the nation do not rely totally on community-oriented policing or traditional-policing; each department more than likely has a unique mixture of both of these policing concepts. Whether a particular leans toward the community concept or the traditional concept depends on the individual communities that each department serves. When law enforcement officials take time to conduct research on the various communities that they serve, then our cities can begin the process of placing their trust back in the hands of the police departments that patrol our multi-cultural communities every day. 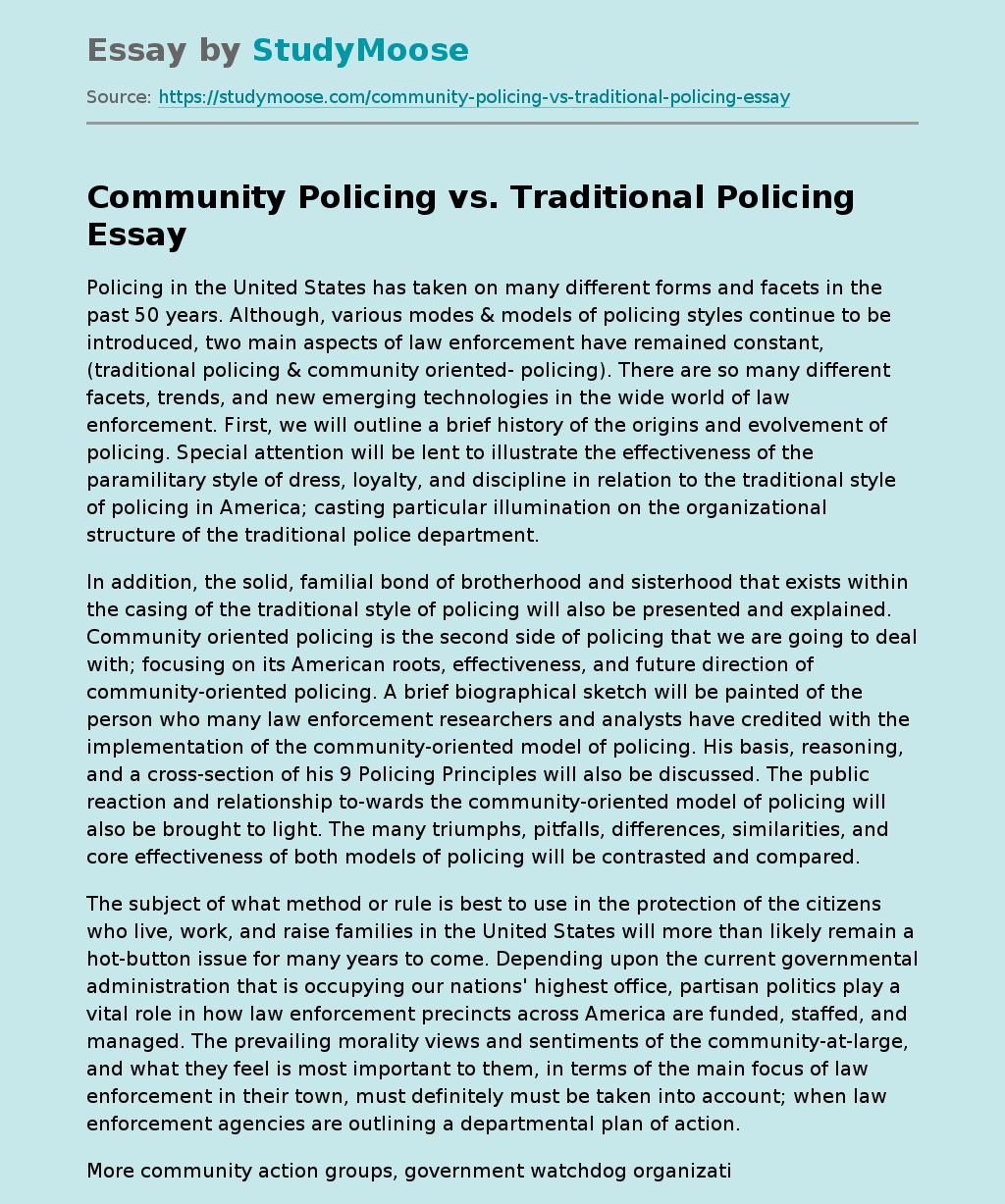