Policing has been a part of America for many decades. In fact, policing was known to exist prior to 1066, the year of the Normandy Invasion of Britain. Throughout the years policing has been a complicated and ongoing progress. The people of England did not have a stabilized policing standard and were often responsible for protecting and serving themselves. As early as the 1600s the Colonial America introduced the English styles of policing; citizens were responsible for monitoring community members’ behavior.

Early constables and sheriffs were with the increased rate of crime and developed a ‘sort’ in community policing known as “watch and ward.

Don't use plagiarized sources. Get your custom essay on
“ Role of Sir Robert Peel in Starting Community Policing ”
Get custom paper
NEW! smart matching with writer

” Later throughout history in the early 1700s policing became an act of religious beliefs. Crime and disorder followed throughout America and unorganized crime prevailed. By the early 1800s a development was established to bring organization and structure to policing. In addition to many historical figures responsible for the development of policing.

Sir Robert Peel (1829) served as Home Secretary of England and cited a new revolution for policing in the community.

This Metropolitan America developed guidelines set for improving community relations and professional behaviors. His ideas stood firm that the key to policing was, “the police are the people and the people are the police. ” In this paper, I will discuss the nine principles developed by Sir Robert Peel and the impact it served on American policing and its history. Sir Robert Peel was a believer of crime prevention and the use of community policing as a source to aid his nine principles.

Peel’s intended goal was to prevent crime and promote better police-community affiliations. This goal was based on the idea that police were willing to engage in special training that focused on problem analysis, problem solving, facilitation, community organization, communication, intervention and conflict resolution, resource classification and use, networking and connections, and cross-cultural proficiency (Larrabee, 2007)(Patterson). Sir Robert Peel’s stood by these nine principles to design a more stable and organized police establishment. By this, he employed his first rinciple that the “basic mission for which the police exist is to prevent crime and disorder. ” In this, Sir Robert Peel instituted a force that served as uniformed police called “Bobbies” or “Beats. ” This form of policing is well-known today and has had a significant impact on American policing. Law enforcement agencies still practice the use of “Bobbies” and “Beats” but now refer to this method as police patrolling with the goal of preventing crime, getting to know the community, and establishing the trust and safety of the public (Siegel, 4th Ed).

This brought about the next two principles, established by Peel, which stated (2) “the ability of the police to perform their duties was dependent upon the public approval of police actions. (3) Police must secure the willing co-operation of the public in voluntary observation of the law to be able to secure and maintain the respect of the public. ” This laid a serious impact on American policing and its history; society today, as in the past, dealt with the importance of diversity and the need for police to comprehend the different cultures, races, and religions that scattered the communities in which they patrolled.

Police were expected to participate a multicultural training and education that prepared them for these situations. Peel believed that if the police could understand these different cultures they would build a trusting and successful relationship that would gain public approval and effective community policing. Peel also believed that police had to develop a sense of force among the people to gain respect, control, and cooperation of the community.

Sir Robert Peel established that (4)“the degree of co-operation of the public that can be secured diminishes proportionately to the necessity of the use of physical force, (5) that police seek and preserve public favor not by catering to public opinion, but by constantly demonstrating absolute impartial service to the law, and (6) that police use physical force to the extent necessary to secure observance of the law or to restore order only when the exercise of persuasion, advice, and warning is found to be insufficient. Although these principles were intended to build trust within community policing, positions and power of police have often been over abused throughout the public creating a sense of rebellion. Excessive police brutality or force always has served as a concern to society and the history of American policing. Excessive force has often led the public to mistrust the police deterring any relationships previously established within the community.

This purpose iterates the importance of the police gaining the cooperation and respects of the public; if the police lose this trust because of simple acts of excessive or unnecessary force, the public is liable to lose respect toward the police creating anarchy against the laws. However, in some instances excessive force, using Peel’s principles may be necessary when dispersing large crowds or uncontrolled situations such as riots, strikes, or major city-wide events. Relating back to Peel’s idea that “the police are the public and the public are the police” forms the seventh principle established to a reformed policing.

Sir Robert Peel states that, “Police, at all times, should maintain a relationship with the public that gives reality to the historic tradition; that the police being only members of the public who are paid to give full-time attention to duties which are incumbent upon every citizen in the interests of community welfare and existence. ” This principle reiterates the importance of community policing and that both the public and the police should share the same concepts and goals in preventing and stopping crime as a number one priority.

This underlines the theory that crime prevention is the responsibility of both the community and the police and that both should share accountability for the avoidance of crime. Furthermore, Peel’s principle (8) states that “police should always direct their action strictly towards their functions, and never appear to usurp the powers of the judiciary. ” In American history police have set a standard in which they are expected to obey and respect the laws as they expect of the community.

This has been a major effect over the period of history because police are often accused of abusing their power as authority figures that implicates to the public that they are untrustworthy and corrupt. This goes beyond community policing that sets a negative standard within the communities that state, ‘if the police, our entrusted authority, cannot follow and obey laws that we as a community are expected to follow, then why not imitate the actions of these police and break the law ourselves. ’ This breaks down the earned trust and communication amongst the olice and community creating havoc and corruption. The people of society and the police must take the examples from the past and learn from them, creating a better future.

There are many mistakes in which prevent effective community policing, such as lack of planning, funding and lack of commitment; these mistakes are often the cause of failed programs to assist in effective policing. Sir Robert Peel states in his ninth principle that “the test of police efficiency is the absence of crime and disorder, not the visible evidence of police action in dealing with it. If police are following the nine established principles by obeying, respecting and enforcing these laws that criminal activity will be broken down and effective policing will be established. Society and police will work together to stop and prevent crime and build respected and trusting relationships worldwide. In conclusion, Sir Robert Peel placed a high value on the battle against crime and still to this day our policing and criminal justice system set goals and principles to continue the fight in preventing crime and working closely with the community to solve crime.

Beyond on the early 1800s, our country has continued to implement the ideas and principles of effective policing. Sir Robert Peel and his principles have set a worldwide standard for community policing that stands in effect to this day. Although the development of policing has had many challenges to include cultural diversity and corruption among police and society, the principles of Sir Robert Peel have given the community and police an opportunity to serve as equals to solve one primary goal. Sir Robert Peel has been a tremendous impact on these developments and continues to implement these principles in law enforcement today. 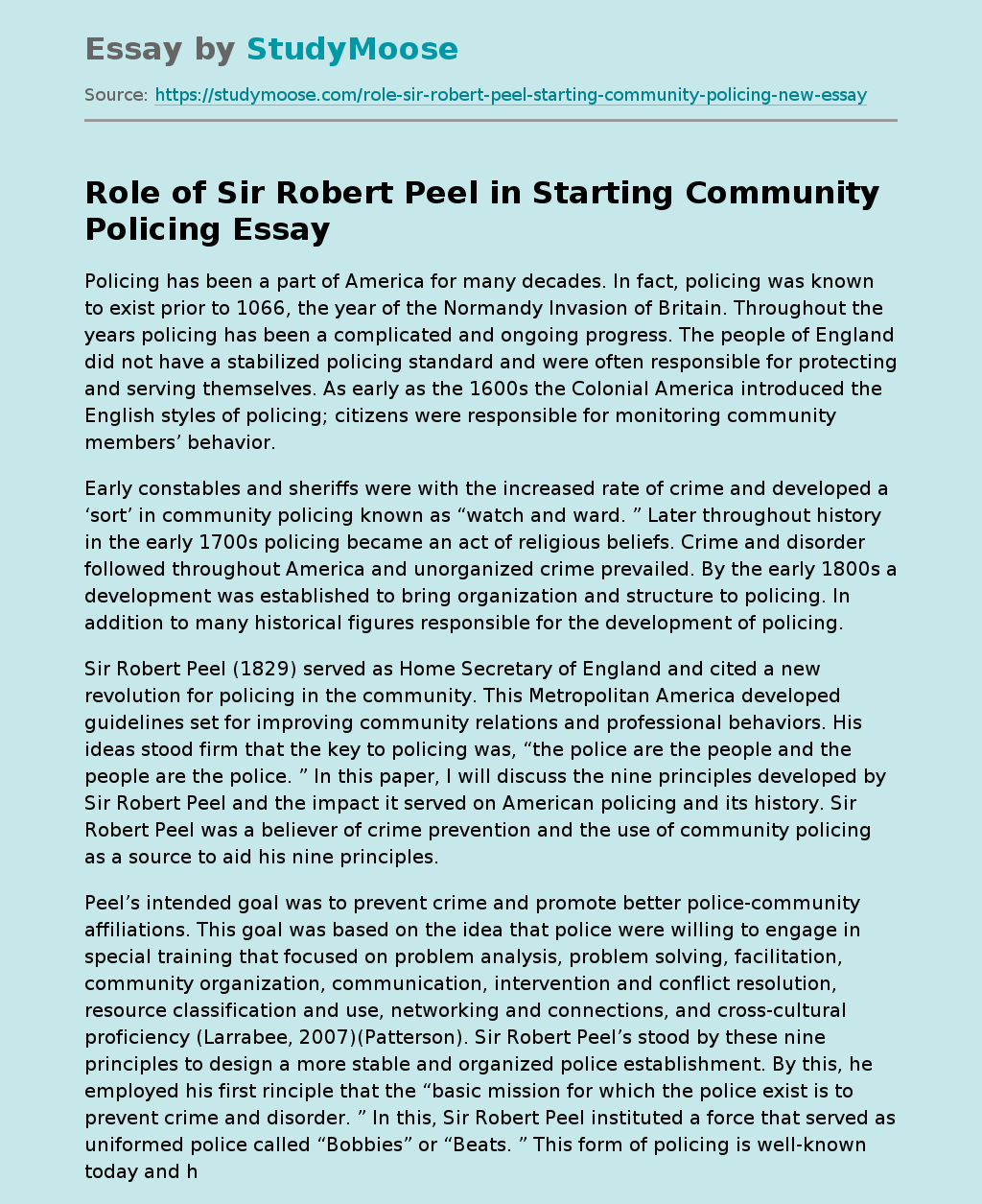