This theory is anchored on the work of Rosenbaum (2003), who posited that the criminal justice system cannot, by itself, solve the complex problems of crime and disorder, including terrorism that afflict society. Consequently, it advocates that resources (human resources) from outside the system are needed, just as are new ways of thinking about diverse problems. Rosenbaum (2003) asserted that this can be achieved through the creation of partnerships that can bring distinctive but complementary skills and resources to the table and that can produce coordinated and targeted responses to public safety problems.

Don't use plagiarized sources. Get your custom essay on
“ Partnership Policing and Community Participation Theory ”
Get custom paper
NEW! smart matching with writer

The latter theory underscores the need to give control of affairs and decisions to the people most affected by them, in this instance, civilians.

Bamidele (2016) in line with this theory argues that the advocates of community participation believe that besides serving as a means of getting things done, involving the people in solving their own problems also brings many lasting solutions to said problems or challenges. The argument is that involving the people in policing allows for the redistribution of power, which makes the people feel involved in political process of the state.

It also brings people together in creating and making decisions about their environment. Bamidele (2016) further argued that the import of this theory in Nigeria could be seen in the call for state police and the fact that in the case of security, the local people as stakeholders in their communities not only understand their neighbourhoods better but share the common aspiration of promoting and protecting it.

This is because they understand their terrain and Boko Haram insurgency members are not foreigners, they are members of communities and these individuals are nonetheless integrated within their communities and are not, on the whole, loners working on their own. Consequently, communities, if involved in the fight against terror could act as an early warning system for the police and intelligence services should they come across information or have concerns about particular individuals or groups (Birt, 2009).

The two theories discussed above gives a more holistic understanding of the problem of Boko Haram insurgency and the role being played by the Civilian JTF. Boko Haram is a movement created through Islamic Fundamentalist movements, they have twin ideologies which are Islamism and Salafism. The inability to reform the North Eastern society into the brand of Islam they profess, led to their attempt to use violence to impose Islamic rule in the North Eastern parts of Nigeria.

The military saddled with the responsibility of halting the movement floundered, until they went into partnership with the people through the Civilian JTF. The partnership between the Military and Civilian JTF yielded tremendous results, which led to the president of Nigeria declaring that Boko Haram insurgency has been technically defeated.

Partnership Policing and Community Participation Theory. (2020, May 20). Retrieved from https://studymoose.com/partnership-policing-and-community-participation-theory-essay 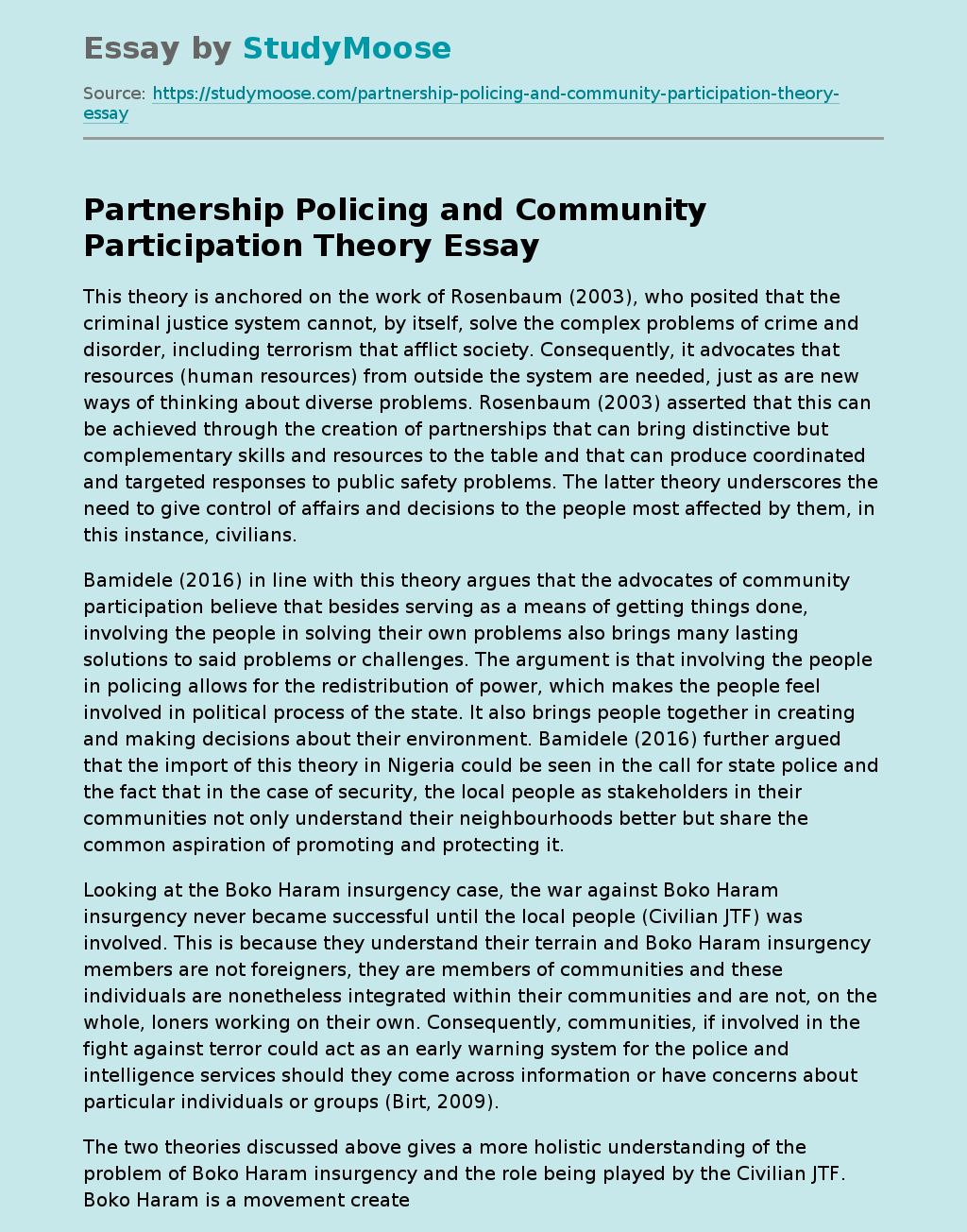