1. The 14-month results are impressive. What are the major factors for this success The protocol that Chief G is trying to implement with his police force is called intergrated patrol. How does this approach compare to the traditional model of law enforcement? The integrated patrol strategy brings a community-oriented concept of policing into play, which crime prevention and reduction efforts are applied in larger areas, rather than focusing specifically on a group of people within a particular location. The integrated patrol strategy, also calls for more enhanced investigative procedures.

It also stresses the importance of information sharing between agencies. This is proven to aid in effective solutions to solving crimes and track trends and patterns. As a result these stratigiesto strengthen relationships between agencies..

In comparision the traditional enforcement strategy responded to crime after the fact, and only concentrated on a certain situation or crime. The traditional strategy is lacking when it comes to creating more organized and strategic plans for the force excercising it.

The strategic planning is vital in stating the overall police mission. You might look at integrated patrol as a one team, one fight’ concept. While the traditional way of doing things, is every man for himself, point of view. Resistance in this situation will most likely come from Sam. He has worked for the force for 26 years. He started as a beat cop and has earned his way to the position he currently holds. He believes in hionesty,fairness, and putting in your time toi earn your stripes.

Respect from Sam must be earned not given on first intrioduction automatically.

Seeing as how Sam has spent 26 years of his life working his way to the position he holds now it is likely to assume that he wouldn’t appreciate someone brand new to the force being out into a position of any kind of his level without first earning it. So Sam will have a natural resistance to letting any other officers investigate becauser her believes again that you have to earn the right to be an investigater.We can overcome Sam’s personal conflicts with the ideals we want to set forth by reassuring him that he heads that department and the descision on who will be investigating will still ultimately be his. As well as the fact he should be told this is a trial and if it is not to work out then no harm no foul.

The least resisitance in this scenario I believe will be coming from Peter. I believe he isn’t trying to throw up any kind of resistance at all. His main number one goal it seems to me is to have an copasetic well organized and well operating force as well as. He is smart enough to know that resistance against this idea from chief would not change the courser of action that the chief would require him to start on but just cause conflict and possible demerrits for him. He welcomes this change and looks ahead to start the trial with a positive and hopeful attitude that this new intergrated patrol will succeed with their force just as it did with the experiment force they tested it with. 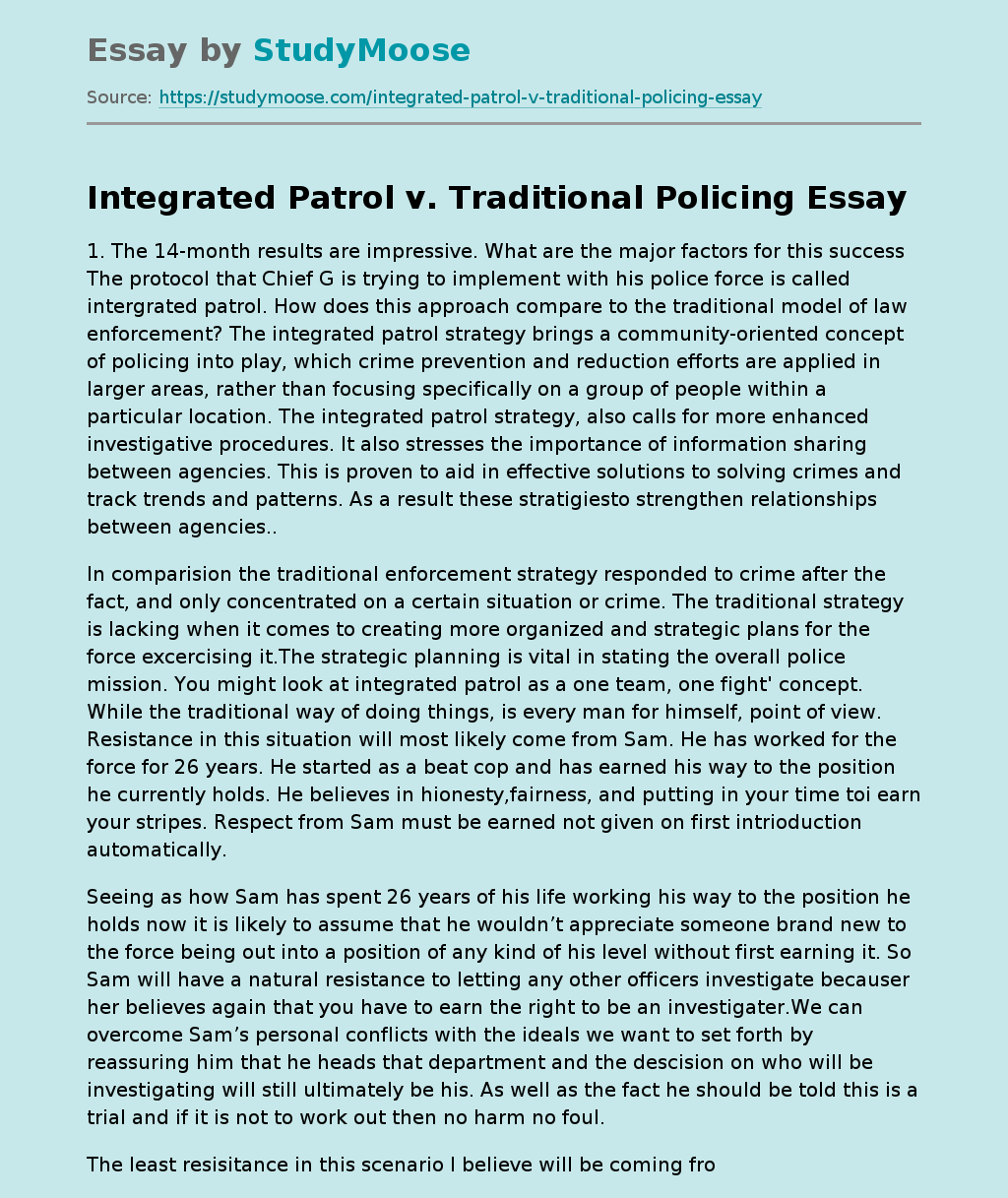