My Millennium Development Goal (MDG) is about achieving Primary education in less developed countries. The goal is to have all children, boys and girls, complete a full course of primary schooling by the year of 2015. This means that everyone can get into school and get a full education so they can read, write and learn. It will help them to be more independent and give them the opportunity to get a job in the future. Primary education is the basis for high-quality skills development in numeracy and literacy, which are critical for skills development in scientific and technological education.

Don't use plagiarized sources. Get your custom essay on
“ Primary Education In Less Developed Countries ”
Get custom paper
NEW! smart matching with writer

Through giving additional aids to the countries that need it and by helping them pay their depths the amounts of children who are getting education is rising. By giving more education to kids, some countries are starting to have problems with reaching the full amount of teachers they need. For primary education to move towards its potential, however, a minimum threshold of five or six years of schooling is needed.

This potential would be boosted if primary school completion were followed by secondary education.

Almost 12 years ago, thanks to this Millennium Development Goal, an extra 34 million Children have been able to get their primary education. This is a very important goal for the world so the economy of poorer countries can reach a higher level. If there would be more jobs, and the poverty would go down, there would not be as many problems with food, money and education in these developing regions.

Enrolment in primary education has continued to rise, reaching 89 per cent in the developing world. But the pace of progress is insuficient to ensure that, by 2015, all girls and boys complete a full course of primary schooling.

To achieve the goal by the target date, all children at the official entry age for primary school would have had to be attending classes by 2009 or so, depending on the duration of the primary level and how well schools retain pupils to the end of the cycle. Many African countries are on track to achieve this goal. Some have made progress on net enrolment, with most countries reaching 90 per cent. The aggregate net primary school enrolment for Africa rose from 64 per cent in 2000 to 84 per cent in 2009. Most African countries have made.

However, countries such as Djibouti and Eritrea still have very low net enrolment. If this Goal could be reached the countries could start developing a lot faster and try to reach the level that many countries, such as many countries in Europe have already done. I think the goal can be completed with enough support of the other countries. My MDG should be sorted first because education is crucial element for human development. It decides what are children going to do on their future depending on their capacity. Achieving Universal Primary Education is also imporant to make women as powerful as men. 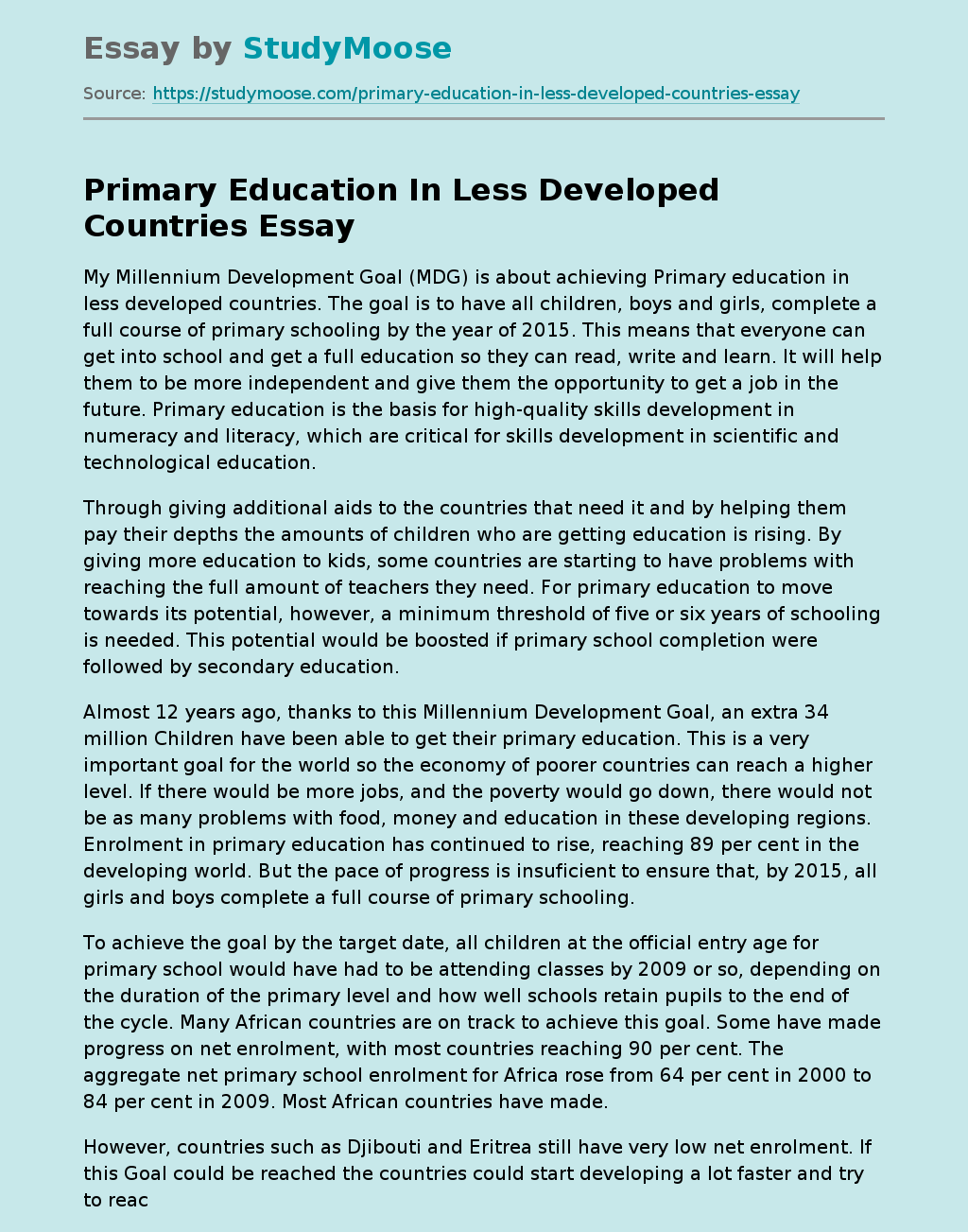