The Positive Role of Religion in Life of Pi

Religion is important to many people and it can play a large role in a person’s life. It can affect and shape one’s personality and morals, provide support and help through difficult times, and allow one to find peace and comfort. It is a major theme in Life of Pi by Yann Martel, as it is the basis of the Piscine Patel’s character. Religion plays a great positive role throughout Pi Patel’s life: it shapes his personality as a young man, it helps him survive at sea, and it gives him the strength to move on and become a successful adult.

Don't use plagiarized sources. Get your custom essay on
“ The Positive Role of Religion in Life of Pi ”
Get custom paper
NEW! smart matching with writer

Firstly, Pi’s religious devotion shapes his personality as a young man by allowing him to be non-judgemental, open-minded, as well as intelligent, and kind. While being devotedly faithful to three religions, Pi is surprisingly acceptant and understanding of atheists. Pi understands that “atheists are [his] brothers and sisters of different faiths” (Martel 31). He respects and understands atheists, despite being religious, which shows how well religion has shaped him.

It makes Pi an open-minded, understanding young man, who respects other religions, as well as atheism, which is important because it gives him good morals.

He is very open-minded and interested in different religions, especially since he believes in three. As he grows up, Pi discovers and devotes himself to three religions: Hinduism, Islam, and Christianity. He is introduced to Islam last and his love for it is evident when he states, “I challenge anyone to understand Islam, its spirit, and not love it.

It is a beautiful religion of brotherhood and devotion” (Martel 67). Each new religion he discovers teaches him to love more and understand more. His religions add a more diverse and deep meaning to life for him.

They help his character develop into an open-minded, compassionate young man with good morals. Aside from being open-minded and understanding, Pi is smart, intelligent, and kind. His positive values develop because he learns to love from his religions. In the beginning of his survival days at sea, he kills his first animal, a flying fish, for food. His kindness and compassion make him grieve, and he “[weeps] heartily over this poor little deceased soul”. Religion makes Pi very kind, which is important because it shows the positive role that it has in his life.

Religion comes early in Pi’s life, and it helps shape his personality in a positive way, making him non-judgemental, open-minded, and kind. It shapes Pi early on to prepare him for what is to come in his life. Secondly, when the cargo ship sinks and Pi remains stranded at sea, he relies greatly on religion. It plays a positive role in his survival because it gives him a reason to keep living and it gives him hope. His appreciation in having his faith to help him is evident when he thanks his gods for all his luck during his days at sea. Pi’s religions give him reason and strength to keep living.

After his ordeal at sea, he explains how he was able to go through it: “I turned to God. I survived” (Martel 345). During times of extreme distress and misery, Pi turns to his gods and they give him reason to keep going and stay strong. After the death of his parents and brother, left in isolation, Pi is in need of emotional strength to keep living, and it is in his faith that he finds that strength. His religion plays an influential role in his life by giving him the reason and the strength to keep living. Moreover, Pi cannot survive his days at sea if he does not have hope.

His religion is what gives him the hope that he will survive. Once he realizes that he can get through his problem if he does not lose faith, Pi’s will begins to strengthen. He realizes that when he says, “Yes, so long as God is with me, I will not die. Amen” (Martel 164). Pi’s faith gives him the hope that he will live and get through his struggle. With this hope, he has the strength to survive, proving that religion once again plays a positive role in his life. Pi shows his devotion to his religions during his survival at sea by praying and thanking his gods every time he is blessed with any luck.

When he first sees a ship since the sinking of the cargo boat, he yells, “Oh, I thank you, Lord Ganesha! ” (Martel 260). Religion is very important to Pi, especially during this time, as it constantly reminds him why he is fighting so hard to survive. He is thankful for the fact that it gives him hope that he will survive, despite his odds, and live. During all his 227 agonizing days of survival, Pi never loses his belief in religion. It helps him get through it, and survive to see the shore again. Finally, religion positively affects Pi because it helps him move on emotionally after his days of survival at sea are over.

Religion encourages him to accept his adulthood, and successfully continue his life by going to university and having a family of his own. His religions stay with him after his days at sea, and he decorates his home with symbols of his faith. Pi goes to the University of Toronto and majors in both religious studies and zoology. After his days at sea, he admits that “[his] sufferings left [him] sad and gloomy”, and that “academic study and the steady, mindful practice of religion slowly brought [him] back to life” (Martel 3).

His practice and his academics are what keep him happy, and they allow him to recover from his emotional traumas, which is important because it helps him move on. With an education, Pi has a greater chance of being successful in his life, especially since he does not have any family in Canada. Furthermore, religion affects his life positively again when he gets married and starts a loving family. When the author of the book visits Pi at his home in Canada, Pi introduces him to his family. As he introduces his daughter, the author notes that “to acknowledge the fact [that she is his daughter] brings a smile to his lips” (Martel 102).

Pi could have spent his days in a hospital, or allowed nightmares of his traumatic past to haunt him. Instead, he again turned to his faith in God, and it gave him the strength to move on and start a family. This makes him successful because his loving family is a source of pride and happiness for him, and a reminder of the benefits of his perseverance and faith. Lastly, Pi stays faithful to his religions after his days of survival at sea. When the author visits his home, he notices the many icons of religion that Pi has through his house and states, “his house is a temple” (Martel 49).

He values his religions after his survival even after his survival is over and he starts his adulthood. Pi notes: “… many people seem to lose God along life’s way. That was not my case” (Martel 51). He never loses sight of God because it is his religion that helps him get through the death of his parents and brother and his long survival at sea. Without the influential and guiding role that religion has in his life, Pi could not move on emotionally after his days stranded at sea, and could not have become a successful adult.

In the end, it is religion which best influences Pi’s life. It positively shapes his personality early on, it gives him reason and hope to survive at sea, and it helps him move on and become a successful adult. Pi’s life is a long journey, filled with pain, isolation, danger, and uncertainty, but it is also a great exploration of his faith. Religion plays a largely important and positive part in his life, and without it, Pi Patel would be a very different character.

The Positive Role of Religion in Life of Pi. (2020, Jun 02). Retrieved from https://studymoose.com/positive-role-religion-life-pi-new-essay 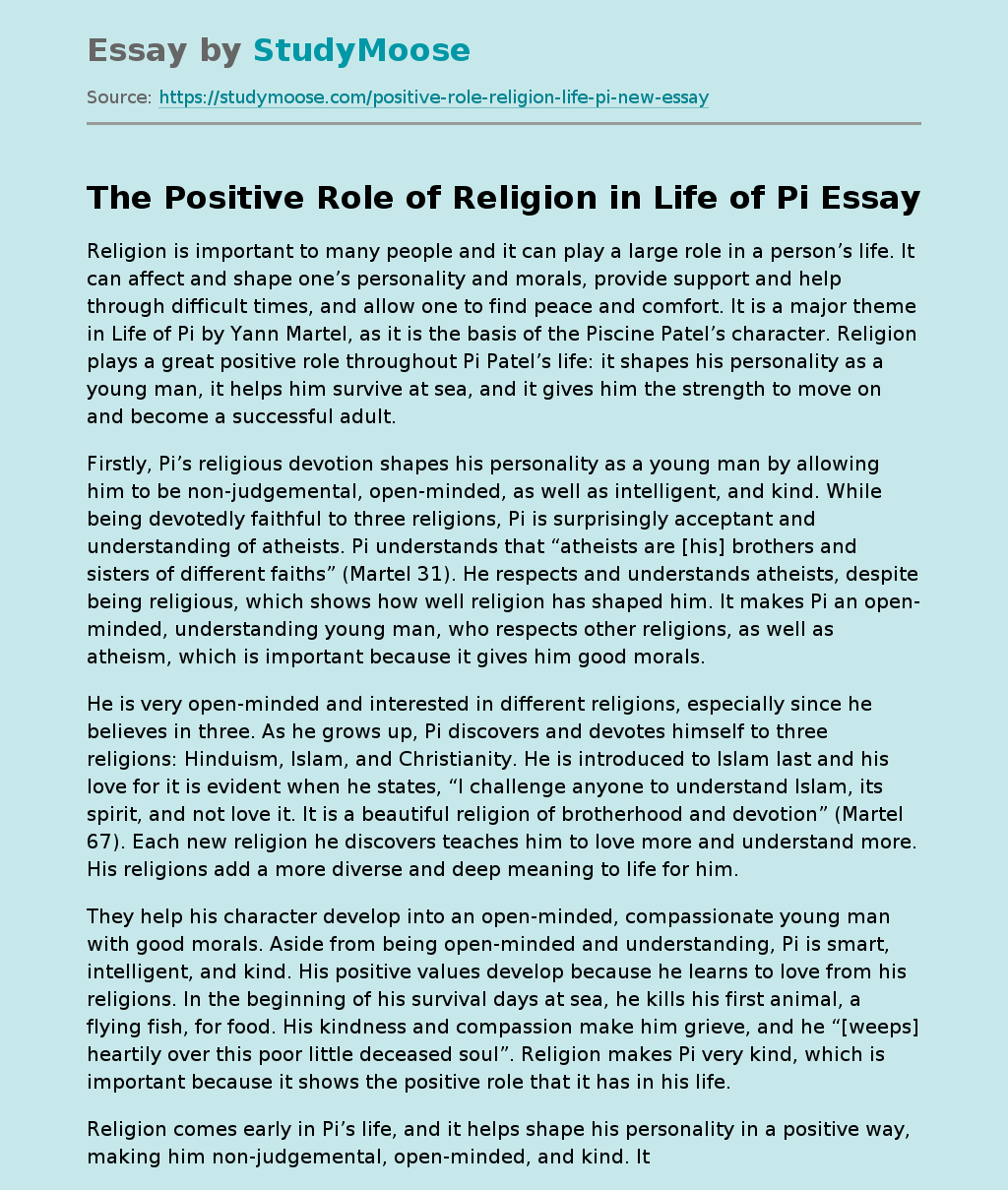