“See through.” Surely, most people have experienced this feeling before, the feelings of being seen, but not truly “seen.” As if every part of their being, their roots, their culture, and history meant nothing and holds no value to anyone but themselves, just as the speaker is raised in a bi-lingual, bi-culture atmosphere although most of us may be forgotten throughout our lifetime from daily encounters or short terms relationships; semester long classmates and professors, the poem “Persimmons” by Li-Young Lee reveals to us with his brilliant use of imagery, symbolism, and other literary devices, emotions so rooted, that they almost escape words.

Turn in your highest-quality paper
Get a qualified writer to help you with
“ Poetry Analysis: Persimmons ”
Get high-quality paper
NEW! AI matching with writer

In the poem, the reality revealed is that we will someday fade away from people and this world. But that the true beauty lies during the events in our lives and until the finale, we are the ones to hold the sweet, ripe “Persimmon,” a sacred and distinct “sun inside [each of us]… golden [and] warm.” Li-Young Lee implements imagery and symbolism to underline the metamorphosis of the early life of the struggles of social placement of a young American Chinese boy to the deep passions of a young man.

“Persimmons” teach us that even if we may go blind, just like the speakers father in the poem, it comes to show that our experiences of life, that despite not everyone will appreciate, or understand fully, that it is something that will forever remain etched in our souls.

At first the poem starts out a bit scattered. There were several pieces that did not seem to follow the time and meaning, but while seemingly scattered, his memories do in fact connect in several ways.

As one specific device, most of his recollections involve the symbol of the Chinese fruit, persimmons. The poem begins with an unpleasant memory from the speaker’s sixth grade classroom where he recalls being slapped on the head and ordered to “stand in the corner for not knowing the difference/between [the words] persimmon and precision”(3-5). Right at that moment the speaker’s attitude is that of confusion. In the first stanza, we learn that Mrs. Walker was the speaker’s teacher in sixth grade:

Slapped the back of my head

and made me stand in the corner

for not knowing the difference

between persimmon and precision.
How to choose  persimmons. This is precision. (1-6)
To Mrs. Walker, the point is simple; the young boy, whose native language is Chinese, simply cannot attain and grasp the elements of English. Clearly he confuses the words that are seen from Mrs. Walker’s point of view to have nothing in common, but maybe only holds similar sounds and that is all. But in the boy’s mind, the two words are connected in a way that Mrs. Walker will never grasp without delving deep. A particular literary device that Lee uses is the choice of enjambment at the word “choose,” (6) which breaks the first stanza and draws attention to the act of selection, and the process of making choices. Although in the first stanza it is seen that the speaker, as a child and as a student is stripped from the power to choose in the process and codes of the incident of his classroom assimilation, he regains power by justifying his linguistic conflations of the words “persimmon and precision,” (5) by connecting the words through their similar sounds and by symbolic association: “How to choose/ persimmons. This is precision” (6– 7) and “fight and fright, wren and yarn” (31).

While justifying the melting pot of his words, he also re-claims control by demonstrating his command of the English language. In the second stanza, however, Lee elaborates on the correct way of carefully selecting and eating a persimmon, and along with that it is affirmed that the speaker does in fact know the difference between the two words. The speaker reveals his understanding of “precision” in the diction being used by Lee to describe how to pick out and eat a persimmon; the words “soft,” “sweet,” “sniff,” and “brown-spotted, are given to the fruit characterizing it and transcending the physical sense of the Chinese fruit and transforming it into an important element, and symbol. Whereas the character of Mrs. Walker would fall in the category of the “teachers” that one may meet throughout life. It can be anyone: from a school teacher, a semester –long college peer, a random onlooker, or society itself. However, these “teachers” not judge one’s personality, but are also ignorant. In defined terms; a person may be treated as a sheep, when in fact, they are the ones fenced in, not able to reach, see or feel further; they do not bother to survey into the deep and enigmatic waters of people, Self, and emotions, in this case, the boy’s mind. The teacher is not aware that his mind is full of different worlds; the world or emotions, and his rich culture. The only thing they perceive is that the boy may have a problem; that the boy has trouble with words, which in a way he does, but for him, the words that tend to “stick out of the page” for him are because of the assimilations that they induce:

Ripe ones are soft and brown-spotted.

Sniff the bottoms. The sweet one
Will be fragrant. How to eat:
Put the knife away, lay down the newspaper.
Peel the skin tenderly, not to tear the meat.
Chew the skin, suck it, and swallow. Now, eat  the meat of the fruit, so sweet, all of it, to the heart.
Can Mrs. Walker and anyone belonging to this pragmatic world even care to imagine the world within him? To the speaker a persimmon is precision, because one needs the ability of perceiving a precise persimmon and the persimmon itself is precision by its existence; a soft fruit, the shape, the smell of a ripe one is an art; not everyone has the talent to spot one and the proper knowledge of how to eat one, just like Mrs. Walker incorrectly prepares the persimmons for the class, as she uses a knife to “cut it up” (41) as if she were “cutting up” this demonstrates her violation of the Chinese culture of the speaker.

The poem takes on a dramatic turn at the third stanza, where the speaker fast forwards through time. Here the speaker describes the moment of a passionate experience with his lover. Here by Lee’s use of symbolism and contrasting word choice is significant because of specific time and place it is being used. In this moment, the speaker has forgotten his Chinese, this could represent the past problems of assimilation to have faded in the aspect of the triumph over the English language. Although he has perhaps gained societal acceptance as an Asian American, he has also gravely lost, where his loss out wins his gain; the loss of his native language, the loss of his culture. As a second interpretation would be that when the speaker forgets about the “Dew” and the fact that they are “Naked,” but recalls the “Crickets: chiu chiu” and that “Ni, wo: [means] you and me” represents his total captivation in the moment, the moment when two lovers unite, creating a union, one perhaps forgets that fact of nakedness, because perhaps in that beautiful moment, one does not feel naked, because their significant other is there, and they are all they need to feel covered, a moment were all barriers are broken, both feel free comfortable in the bareness, where he even forgets the background sound playing.

By the use of symbolism, it is known that “Persimmon” is the main symbol, and so acts as a metaphor of the love scene, focusing on the passionate experience that marks the speaker for life. In the ninth stanza, a new scene is present and there is another shift in time, this time the speaker is a mature adult, visiting his parents, but also revisiting old memories, that arouse ancient feelings. In this particular stanza, Lee’s use of vivid imagery is openly present, where he describes the speakers elderly father who has gone blind:

I rummage, looking
for something I lost….
I find a box….
three paintings by my father:
Hibiscus leaf and a white flower.
Two cats preening.
Two persimmons, so full they want to drop from the cloth.
….Which is this?
….Oh, the feel of the wolf tail on the silk, the strength, the tense precision in the wrist….
Eyes closed. These I painted blind.
Some things never leave a person:
Scent of the hair of one you love,
The texture of persimmons, in your palm, the ripe weight. (62-88). Lee’s use of concrete details allows has a great impact and effect on this particular poem, because it draws the reader in, allowing them to engage and become more attune to the feelings the poet is trying to transmit: the sight of the Hibiscus, the movements of the “cat’s preening” (75). Although the speaker’s father has lost his eyesight, he can still “see” the world. When a person goes blind, they are shut out from the world, but the thing that stays with the person transcends the sense of vision; the smell, the texture, the weight of the persimmon that the father speaks of that will “never leave a person,” (85) that the feel of a ripe persimmon in the palm will remain a part of you , just like the speakers culture, his memories and experiences. This could also represent an important shift in the poems tone, in that the speakers finally accepts his culture or art of reminiscing of familiar emotions, both like being “back home.”

His experiences, although not entirely positive, have helped him grow into the man he is now. Li-Young Lee, by using sensory imagery and “precise” diction along with the informal stanza structure, reveals to the reader that, despite the speakers his bi-cultural past, he has now realized, through his experiences, that some of the most important things will not always be “visible” and he is at peace with his culture. The obscurity of words that Lee demonstrates in this poem correlates with the obscure and that of which is not accepted in our materialistic, and practical world. But the bitter-sweet irony of it all is that at times, as soon as something like a marvelous feeling or thought is put into words, its mystical beauty may diminish. This poem is not only a self contained piece of poetry. It is art, a ticket to see, witness, and feel between our and the poet’s inner world. Li-Young Lee, knowing that words cannot directly express these feelings; he uses his poetry as a tool to evoke such feelings in us utilizing the informal poetic form and the advantage of symbolism and imagery, has allowed us to picture detailed, vivid scenes to show us how superficial and apathetic the world around us can be to the secretly immense, and passionate world in each of us. 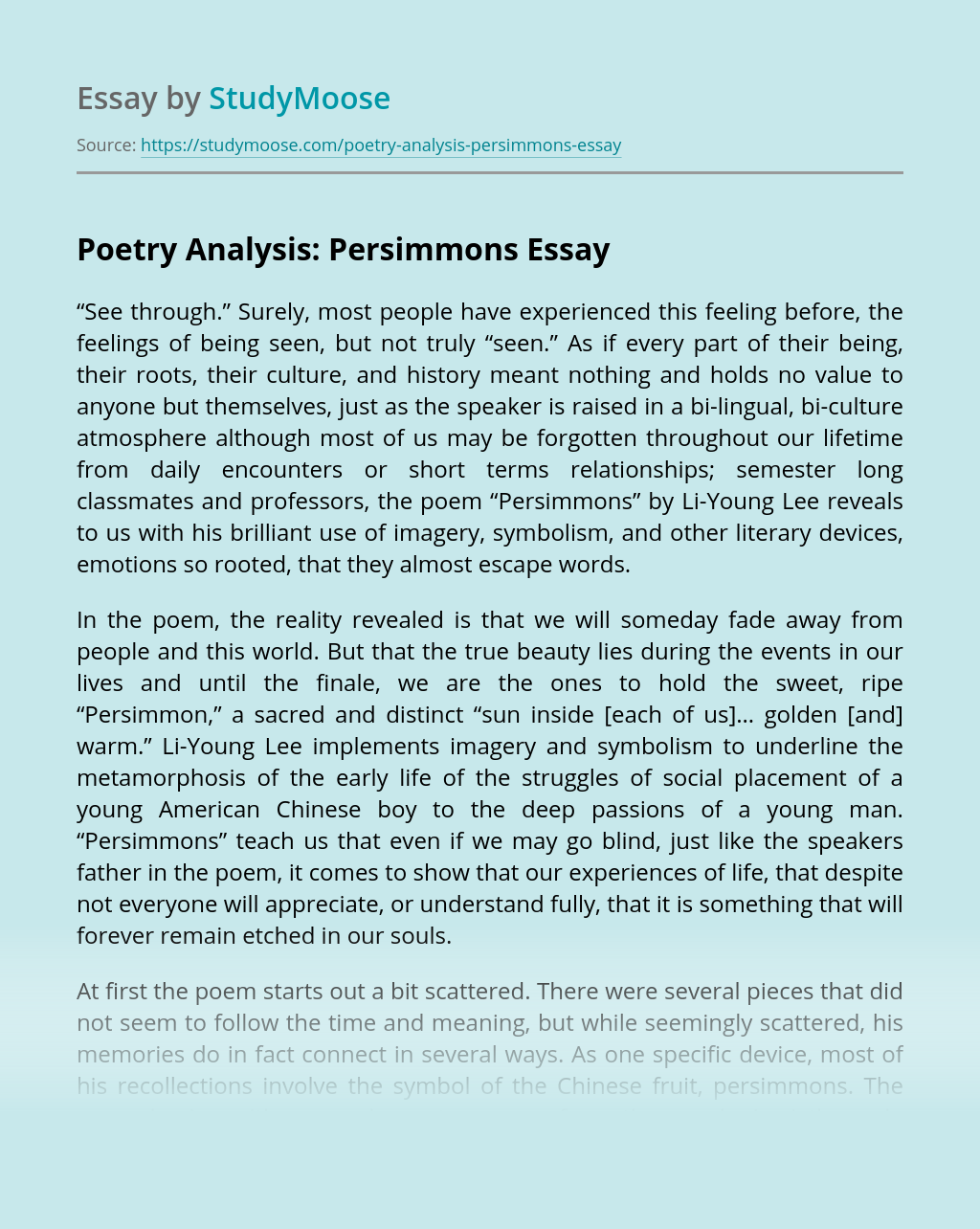 Turn in your highest-quality paper
Get a qualified writer to help you with
“ Poetry Analysis: Persimmons ”
Get high-quality paper
Helping students since 2015
Stay Safe, Stay Original