“Greater Love” is a poem about the painful memories experienced by Wilfred Owen in World War I. These memories seem to overshadow the memories he has for his love. All Quiet on the Western Front is a novel whcich is also about World War I. The description of the war is similar in both works. Experiencing the terrors of war changed the outlook Owen has on life, and this poem describes his new outlook. The theme of “Greater Love” is how the war has changed the author’s look on life.

Before the war Owen tells how he had fond memories of his love singing, her lips, and her eyes. After experiencing the war Owen remembers the bright red blood-covered stones, as stated in line 2. He remembers the knife skewed limbs instead of the slender limbs of his love. Rather than her beautiful eyes he remembers the eyes of blinded men which he witnessed injured in his stead. The memories of the dear singing voice of his love are no longer soft after witnessing the voices of those past disappear to never again be heard.

The heart of his love is not a big as the hearts he witnessed being filled with bullets. Nor is the memory of her heart as vivid as the memory of those hearts filled with shot. The paleness of his love’s skin can not compare to the paleness of the dead bodies of the soldiers scattered across the battlefields. Thus, the death and gruesomeness of this poem contribute to the theme of the war changing Owen into a sad soldier no longer able to remember the days when he would woo his love.

Owen expresses regret for letting comrades fall in his place and because he can no longer see the world or his love the way that he once could. The mood of the poem is one of sorrow. The author is sorry that he had to witness the blind being led through the streets and the English bodies falling dead on the rocks. Many literary devices express the theme, mood, and tone; in the poem “Greater Love” the following are examples. Within the poem Owen uses several literary devices for conveying his message.

Alliteration is used in the second line, “the stained stones. Owens is calling attention to the fact that the stones covered in blood are more memorable in his mind than the memories of his love’s sweet lips. Consonance places emphasis on the redness of the stones, “stained stones” (L 2). Alliteration is used once again to describe the ties between “…wooed and wooer…”(L 3). Wilfred Owen’s poem is a dramatic monologue because he is speaking to his love and her responses are not recorded within the poem. The rhyme scheme of this poem is standard, with six lines to a stanza the scheme would be written AABBBA CCDDDC EEFFFE GGHHHG.

The poem “Greater Love could be considered in its self an analogy between the authors memories of his love and his memories of the gruesome war. All is Quiet on the Western Front and “Greater Love” are two similar works of literature because they were both written about World War I. Both narrator, Owen and Paul, portray the war as a sad and tragic time which changed, in Paul’s case ended, the lives of the narrator. Owen implies throughout his poem that the memories of war have faded and corrupted the memories he once had of a society which he fit into.

The same is true of Paul in All Quiet on the Western Front; Paul’s life was destroyed by the war. When he returned home on leave Paul relized his former home was now a place of uncomfort. In line two Owen says this, “As the stained stones kissed by the English dead. ” In this phrase Owen is revealing the horror of his mission in the war. Owen was once a soldier who witnessed the horrors of Englishmen falling dead and their blood making the gray stones look red.

Then later on in line 6 he states, “When I behold your eyes blinded in my stead! Owen is referring to the fact that he saw the eyes of men blinded while his eyes were spared, and he portrays this memory with a feeling of sorrow that his sight was not taken. Paul describes a war experience that was very similar to that of the experience had by Owen. Paul describes scene after scene were his friends are either injured or killed. Paul expresses these experiences with the same tone as Owen; a tone which questions the reasons Paul’s friends were hurt in the place of Paul. In this scene Paul is describing the death of his close friend Muller.

“Muller is dead. Someone shot him point blank in the stomach with a Verey light. Before he died he handed over his pocket book to me, and bequeathed me his boots-the same he once inherited from Kemmerich. ”(p 279). After this Paul goes on to describe how when he dies he shall leave the boots to Tjaden. This event occurs late in the war after the soldiers have been fighting many years and they have no hope left. Their lives are worth almost nothing to them and the death of another has become an oppertunity to gain a new pair of boots.

It seems terrible that death carries such weak meaning, but if there was a huge mourning period for every death in the war the time of mouring would be impractical. The strain mourning for all the fallen would also drain the stamina of a soldier after only a few comrades have fallen. Memories such as the ones expressed by Paul and by Owen are the type of memories which change a person’s outlook, and the outlooks of the narrators were definitively affected by their experiences and these experiences were reflected in their works.

The memories of the war were dominate in Owen’s mind, and he always introduced by phrases with words opposite of their normal conotation. An example would be in line 2 kissed, a word with a positive connotation introduces the fact that dead soldiers blood had been spilled on the rocks making them bright red. The situation being described is a negative one which is introduced by the positive word “kissed”. The opposite is also true, that being a positive phrase is introduced by a word with a negative connotation. An example would be in line 13, the word “not” is used to introduce a phrase concerning his love voice.

The singing voice of one’s love is usually regarded as positive, yet Owens uses the word “not” to introduce this phrase. This style is showing that in Owen’s mind the ideas being introduced by positive words were the ideas which mattered and were extremely relevant to his life at the time which he wrote this poem. “Greater Love” and All Quiet on the Western Front are two very different works of literature which both convey the message of the gruesomeness of World War I. By reading and comparing these two pieces readers can better understand that any format of writting can be used to convey the same message. 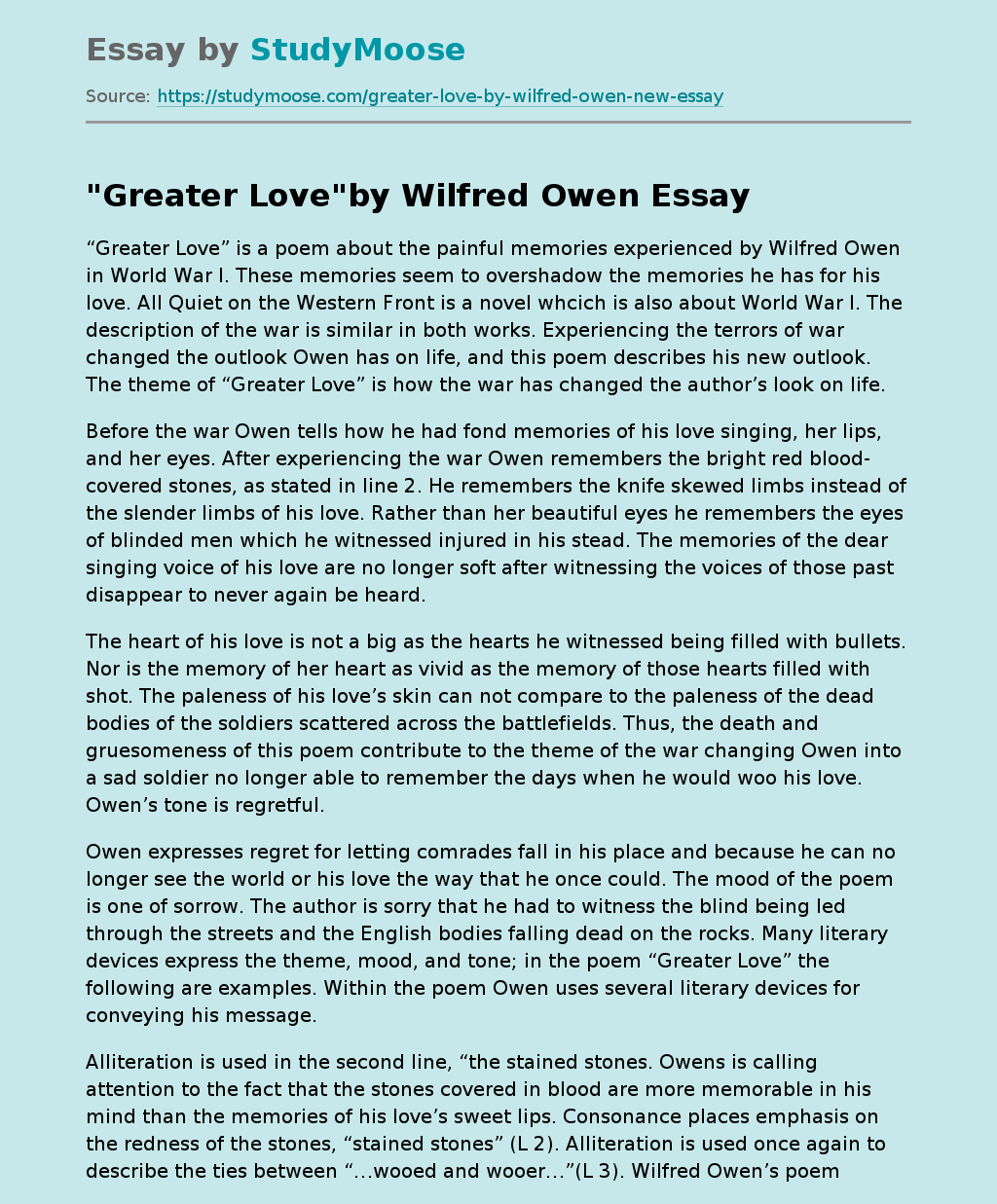