To Kill a Mockingbird Archetypes

One major archetype in Harper Lee’s To Kill a Mockingbird is the quest that the kids try to achieve; to have Boo Radley make an appearance for them. At some points, they even take it upon themselves to find him, deciding one of the ending summer nights to find him “Because nobody could see them at night, because Atticus would be so deep in a book h wouldn’t hear the Kingdom coming, because if Boo Radley killed them they’d miss school instead of vacation” (58).

Don't use plagiarized sources.
Get Your Custom Essay on To Kill a Mockingbird Archetypes Just from $13,9/Page

This can show that Jem and Dill had decided to put careful planning on their ideas.

If they were going to see him, they decided to make the most of their situation. However, the kids still had a mindful watch for their safety in the worst case scenario. This is extremely evident in their first attempt when Jem “threw open the gate and sped to the side of the house, slapped it with his palm and ran back past us, not waiting to see if his foray was successful” (16).

This allows the author to understand that, while the three kids were curious, they were still scared of whatever might unfold before them should they end up interacting with Boo Radley. This can very well portray how the nature of children will work at times, interrupting their flow of their quest.

Another major archetype in this story is the initiation that Scout, Jem, and Dill go throughout the tale, each at an individual pace. In the beginning of the twelth chapter, Scout goes over how Jem was growing older and how he was “difficult to live with, inconsistent, moody. His appetite was appalling, and he told me so many times to stop pestering him I consulted Atticus: “Reckon he’s got a tapeworm?” Atticus said no, Jem was growing. I must be patient with him and disturb him a little as possible” (131).

This shows an initiation sequence occurring in Jem, as he now takes personal time to transcend into a higher level of maturity. While it may seem very odd to Scout, the change in character aids in the development of the story. Another moment, this time for Dill, as he is escorted out of the courtroom by Scout, mention how “Mr. Finch didn’t act that was to Mayella and old man Ewell when he cross-examined them.

The way that man called him [Tom Robinson] ‘boy’ all the time and sneered at him, an’ looked around at the jury everytime he answered – “ (226). This shows that Dill, as he is beginning to confront the reality of how humans can act (be it generally or as an assumption in his head), and how he will begin to start understanding how to handle the situations in a much calmer manner than tearing up at scenes like the one he watched.

To Kill a Mockingbird Archetypes. (2016, Apr 30). Retrieved from https://studymoose.com/to-kill-a-mockingbird-archetypes-essay 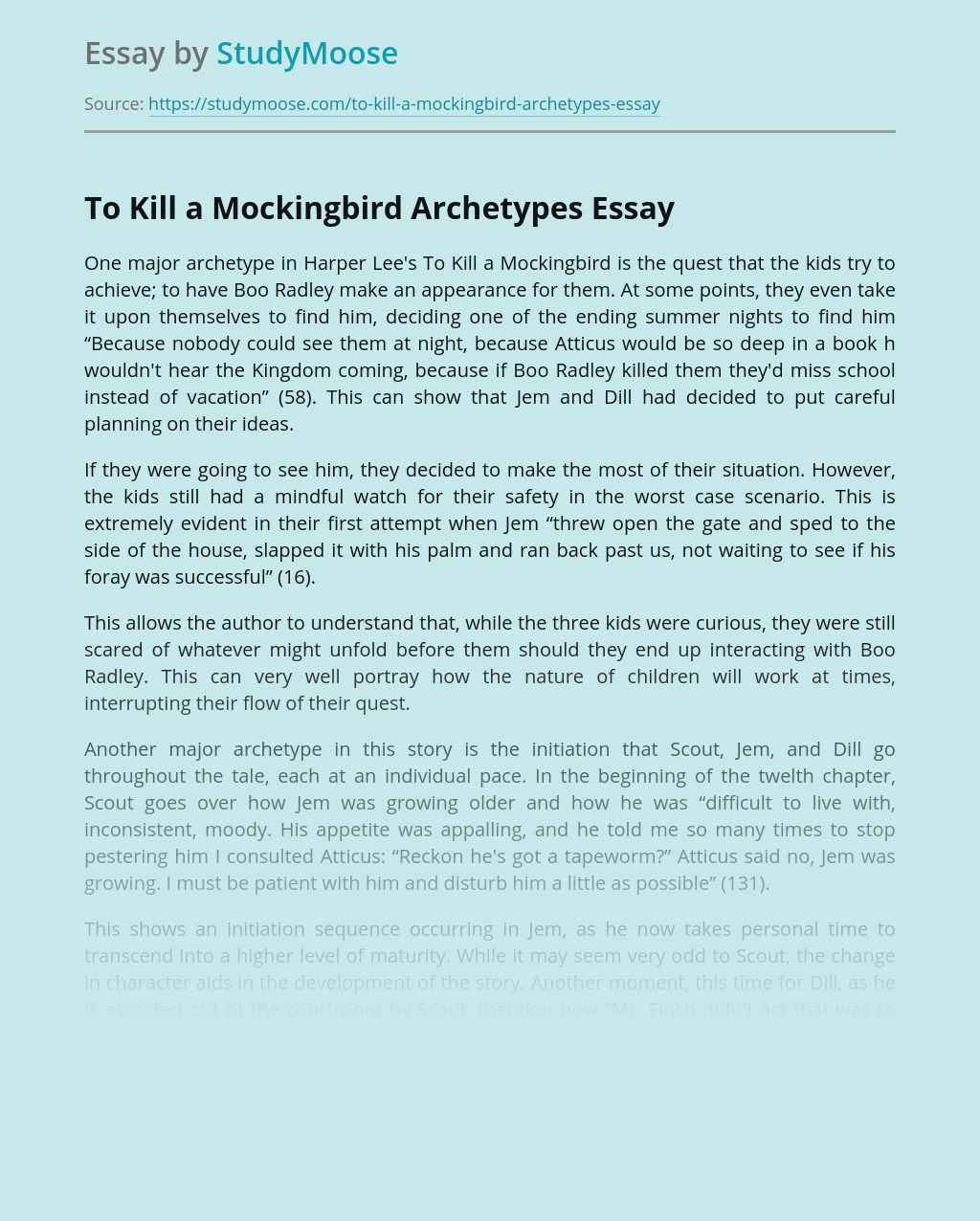 Kafka’s Metamorphosis in Context to His Era

One of the major German writers was a Jewish, middle class resident of Prague, a man named Franz Kafka, who wrote disturbing, surreal tales. Writing in both short story and novel form, his work was published posthumously by a friend, Max Brod, who ignored his requests to burn his writings upon his death. Because...

"Where Are You Going, Where Have You Been" by Joyce Carol Oates

“Where Are You Going, Where Have You Been? ” is a short story written by Joyce Carol Oates. On the surface the narrative is fairly generic. The plot follows a 15 year old girl named Connie who is a typical teen – shallow, and self consumed. She spends her days at the mall, listening to...

Even as a minor character in the play Hamlet, the character Ophelia plays a vital part in the development of both the plot and thematic ideas. However, Ophelia is an extremely complicated character as she can be read in many different ways. This in effect causes the readers or audience to be more insightful and...

How representative are these poems of Blake’s other work in ‘songs of innocence and experience’ This essay will analyse, compare and contrast two poems by William Blake, called ‘The Lamb’ and ‘the Tyger’. I will be looking at how Blake uses imagery, structure and form to create effects. I will then explore how representative the...

From good to evil in The Lord of the Flies

The Lord of the Flies by William Golding is tale of a group of young boys who become stranded on a deserted island after their plane crashes. Linked in this timeless novel are lots of styles, most that relate to the fundamental evil that exists in all people and the harmful nature of humanity. In...