Persuasive Essay on John Proctor from the Crucible

Who is John Proctor? Is he is a hero, a villain, a conqueror? Some may think he is craven, but others may credit him with great fortitude. This brave man was one of many who died for what he believed in. Although many people tried to persuade him to do otherwise, he stood his ground and died an innocent man. John had many reasons for choosing what he did. At first he was going to confess to save his life and be with his family.

Don't use plagiarized sources. Get your custom essay on
“ Persuasive Essay on John Proctor from the Crucible ”
Get custom paper
NEW! smart matching with writer

When Danforth made him sign the paper so he could post it on the Church doors, Proctor lost it. “It is my name! Because I cannot have another in my life! Because I lie and sign myself to lies! Because I am not worth the dust on the feet of them that hang! How may I live without my name? I have given you my soul; leave me my name!” is something he yelled to the court right after signing the paper.

It was his name that they were taking away from him and it was the only one he will ever get. His sons will carry on that name, and if they post his it up for everyone to see, his good name will be ruined. Proctor is looking out for his sons, so they can carry on the family name with good reputation.

Proctor had a right to not want his name up on the church doors. He didn’t want everybody seeing that he had confessed that he was a witch.

John is supposed to be the guy everyone in the town looks up to. He didn’t want them seeing that he had committed a sin just so he could keep his life. He felt there was no need for them to use him to get other people to follow in his steps and lie. Proctor said to the court, “ You will not use me! I am no Sarah Good or Tituba, I am John Proctor! You will not use me! It is no part of salvation that you should use me!” As a result of all this anger, John rips up the paper he signed. That being the case, John Proctor was hanged for the assumptions of being a witch. I know you all are outraged by the aftermath of all this, but Proctor made the right choice. He was concerned about having his “confession” made public. He was primarily afraid that his sons would never respect him and would think of him as craven for giving into the court. He died for the good of his family, not himself.

Persuasive Essay on John Proctor from the Crucible. (2017, Jan 30). Retrieved from https://studymoose.com/persuasive-essay-on-john-proctor-from-the-crucible-essay 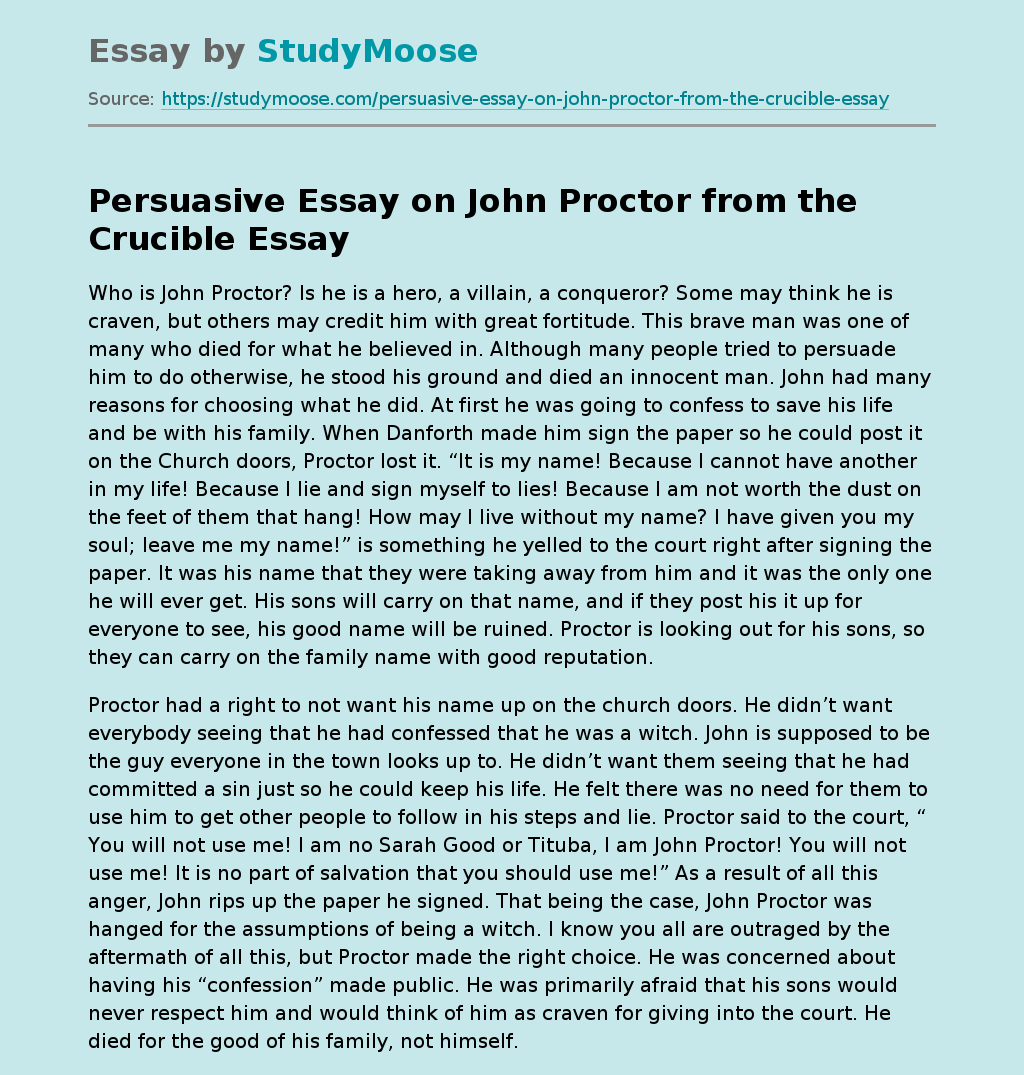