Personality in What you Pawn, I Will Redeem

Sherman Alexie’s “What you Pawn, I Will Redeem” appears on the surface to be a simply written story of a homeless, alcoholic Indian in Seattle who is trying to earn enough money to reclaim his grandmothers Pow Wow regalia from a local pawn shop. But upon looking closely, there are many symbolic passages that my lead a person to much deeper conclusions. Throughout the story there are many clues that hint at the fact that this quest may not have been real, but a more “spiritual” experience for him.

It could be argued that Jackson Jackson was on a modern day vision quest. In the introduction of the story, Jackson bluntly describes himself as a homeless Indian who “…married two or three times, fathered two or three kids, then went crazy” and “…an alcoholic Indian with a busted stomach…”. His alcoholism has become critical to his health. Years of alcohol abuse and mental illness may have altered his sense of awareness.

It is plausible that his quest to reclaim his grandmother’s regalia is truly a delusion, which he has manifested within himself in an effort to find his connections with his family, his heritage and himself. His desire to reconnect with his people is apparent early on in the story, and may be perpetuated by his situation. “My people have lived within the hundred mile radius of Spokane, Washington for at least 10,000 years”. Yet he is homeless. He feels invisible, like so many other homeless Indians in Seattle. “Piece by piece I disappeared, and I’ve been disappearing ever since”.

This passage could symbolize not only his own feelings of disconnect from his family and culture, but the Indian people’s plight in general. They struggle to remain rooted in their culture while being forced to leave their ancestral lands and sacred places behind. The above passages establish the importance that he places on his family and his heritage.

He takes pride in the fact that he is a “Spokane Indian boy, an Interior Salish” and he has suspicions of another Indian man he meets because he refuses to identify himself clearly with a specific tribe. This leads to his statement “…we Indians are great storytellers and liars and mythmakers…”, which gives the reader the first inkling that perhaps Jackson’s story is not to be taken at face value. It may not necessarily be the honest truth, but is a part of his story. It is his truth. The sudden appearance of a pawnshop, on a corner that he has passed by many times creates a feeling that something may be amiss. Throughout the story, it is portrayed in an almost mystical way. “We Indians have built-in pawnshop radar”, he quips, yet he has never seen this one. It seems to have magically appeared. Later in the story, its mysticism is reinforced when, upon trying to return to the pawnshop, it “seemed to have sailed away like a ghost ship… And just when I’d given up…there it was, in a space I swear it hadn’t occupied a few minutes ago.” Even the owner himself has changed in Jackson’s recollection, seeming younger than he had appeared before.

Adding to the effect that Jackson’s experience with the pawnshop may have been a delusion is the fact that his Grandmother’s missing regalia is hanging in the front window. This Pow Wow regalia is likely the most significant catalyst that he could have received towards his healing. Jackson has likened his family’s misfortunes and even his grandmother’s death to the theft of her regalia. “I wondered if my grandmothers cancer started when someone stole her Pow Wow regalia…I wondered whether I could bring my grandmother back to life if I bought back her regalia.” Through his manifestation of the missing regalia, he has enabled himself a powerful way to reconnect with his past and to resolve a series of perceived family catastrophes which he loosely attributes to it’s theft. He makes reclaiming it a personal quest, and believes that by winning it back he can pay honor to his grandmother and his culture, as well as regain his own.

When the policeman offers to investigate the theft he quickly declines the help, saying “…I care about it. It’s been a really long time since I cared about anything “. He knows that he must earn the rights to claim it, and it is not something that anyone else can do, but something that he must resolve within himself. The pawn shop and the appearance of the regalia are the most easily recognizable clues that may lead a person to think he may be experiencing a delusion but there are other, more discreetly written nuances as well. In the story, we are introduced to the three Aleut fishermen. Immediately before their appearance, Jackson is sitting by the water. Alexie writes “…salt always smells like memory.” This statement indicates that the following encounter with the Aleuts may be a part of his delusional encounter as well. Although not fully rounded characters, they contribute to his tale.

Throughout the story, the three Aleuts are also longing and searching for their home, and together they cry and miss their families. They are stagnant, choosing to sit and wait for the return of their boat rather than try another path to get them home. I believe that this may parallel Jackson’s homelessness and alcoholism in the story. In a later passage they share spiritual chants and songs with him, singing stories about their grandmothers and families, which help to guide him closer to his heritage and his own grandmother’s memory. Even their exit from the story further promotes the feeling of mysticism. “Some Indians swore they walked on water and headed north”. They had chosen, as he had, to try to find their way home. The pawnbroker is the final character in the story that plays a part in Jackson’s delusion. Even though Jackson still doesn’t have the money that the pawnbroker has specified, he gives Jackson the regalia.

This leads the reader to believe that to the pawnbroker, the quest was not to obtain the money paid for the regalia, but to help Jackson reclaim the lost connection he needed with his family and culture. Throughout the story, Jackson tells in a nonchalant manner how his friends and family have gone. “I wanted to share the good news with Junior, but he was gone. I heard later that he had hitchhiked down to Portland, Oregon, and died of exposure…”. The way in which he presents the disappearance of his friends from his life gives the reader a sense of the resignation and hopelessness he experiences.

However, even though he seems to be resigned to losing those he cares for, he continues to reach out and help others. He refers to the Indians in the bar and the Aleuts ‘cousins’ and assures the shopkeeper’s daughter that she is ‘family’. In doing this, he comes to realize the connections he has all around him and no longer feels alone. “…it’s ok, there are Indians everywhere”, he tells the pawnbroker. The pawnbroker, upon contemplation, decides that he has “earned” the money, and so he has redeemed his family’s heirloom. By putting on the regalia and dancing in the streets, he signifies that he feels once again connected with his grandmother and the culture. He likens himself to the yellow bead sewn into the regalia. He is imperfect, yet a part of something beautiful. He is no longer invisible, but seen.

Personality in What you Pawn, I Will Redeem. (2016, Sep 23). Retrieved from http://studymoose.com/personality-in-what-you-pawn-i-will-redeem-essay 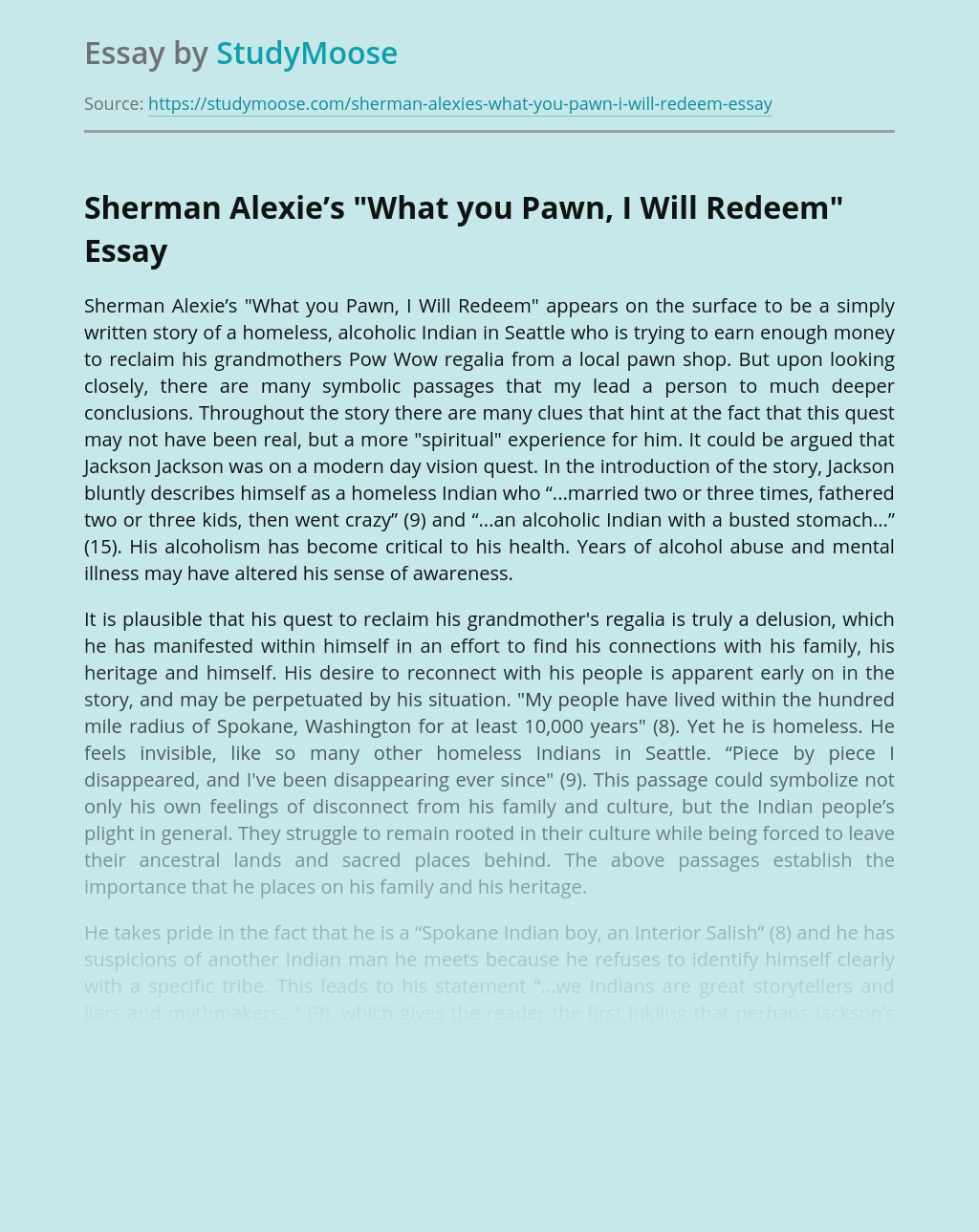 Don’t waste time
Get a verified writer to help you with Personality in What you Pawn, I Will Redeem
Hire verified writer
$35.80 for a 2-page paper
Stay Safe, Stay Original