Based on the film Anak, what specific issues do OFW (Overseas Filipino Worker) parents and their children face? Give three concrete examples. a. Unfamiliarity of family members and change in behavior

In one of the first few scenes of the movie, Josie arrives in the Philippines. A friend and her children greet her but she does not notice her children right away. She gracefully greets her children the moment that she found out that it was infact them already all grown up.

Don't use plagiarized sources. Get your custom essay on
“ “Anak” Reaction Paper ”
Get custom paper
NEW! smart matching with writer

Since she was abroad for a very long time, her children didn’t know how to react to her gracefulness and felt a little awkward, especially for Daday, the youngest of her three children, whom she left at a very early age. So there is an unfamiliarity of the face and ofcourse in behavior. Children grow up and eventually get used to not being around their OFW parents so their behavior towards them also change. Struggle to reconnect to one another

It was also evident in the movie that the children were struggling to be open to Josie, most especially Carla.

Carla felt like her mother betrayed her by not coming back home and not calling them when she was gone. So she grew up not having a mother who would look out for her and teach her the good values that she needed. Carla ended up being influenced by the wrong people. When her mother finally came home, she felt like her mother was not part of her life anymore and just stopped caring about her.

She never told her stories of what happened to her life. Also, Michael had a struggle to tell her that his full scholarship got voided, and Daday had a hard time being comfortable with Josie. All this is due to the experiences of Josie’s children that she missed. She wasn’t able to be there for her children during the times wherein they needed her the most. So the children lost their sense of security and struggled to get it back. Living in the Philippines

As simple as it sounds, I believe that OFWs find it very hard to live in the Philippines again. Just like in the movie, Josie and her friends’ taxi business was not that successful. It also affects the lifestyle of the children just like how Josie had to pay Michael’s full tuition fee for him to study in school. She used the business’ money to pay for that. Aside from the struggle to reconnect, this is an additional burden for OFWs so sometimes, like in Josie’s case, they go back abroad and just try to get a more decent job from there, and once again, away from the family.

How do transnational families (families with OFWs or migrant workers) challenge stereotypes or images of the traditional family? I think they just try their best to live a normal life. When it comes to communicating with the OFW parents, they see to it that they make use of any kind of communication like letters, phone calls, and in this current generation, we have video calling. They do this so that they feel like their parents’ are with them and their connection with them won’t be broken. In the movie, it was seen the Josie’s bosses hindered her from talking to her family at home and also from going back home to the Philippines when her husband died. So, the connection between Josie and her children got broken ever since that happened.

What other issues confronting the family were present in the film? Justify your answer by giving concrete examples. One of the issues in the film is Carla’s involvement with illegal substance and teenage pregnancy. She does this to cope with her tough experiences. She mentioned in the movie that she was like that because she never had a mother to tell her not to do those kinds of stuff. She never had a mother’s security that’s why she felt like she can single-handedly do stuff without the permit of anyone. Another issue is the struggle to keep up with local business. This was seen when both of Josie’s friends backed out of the taxi business due to financial problems. This, and family issues, left Josie no choice but to just go back to Hong Kong and work there again.

Give two concrete recommendations to solve problems confronting transnational families and/or other family-related problems that were present in the film. There should always be communication between the OFW parent and his or her family members. With this, they are updated about each other’s lives and they are connected. Also, the children will still somehow feel the security of the parents even though they’re not physically with them. Try to visit as much as possible. Even though there is communication, seeing a loved one personally is still better. There is more shared experienced when an OFW parent is physically with his or her children and therefore, there is a stronger bond among them. 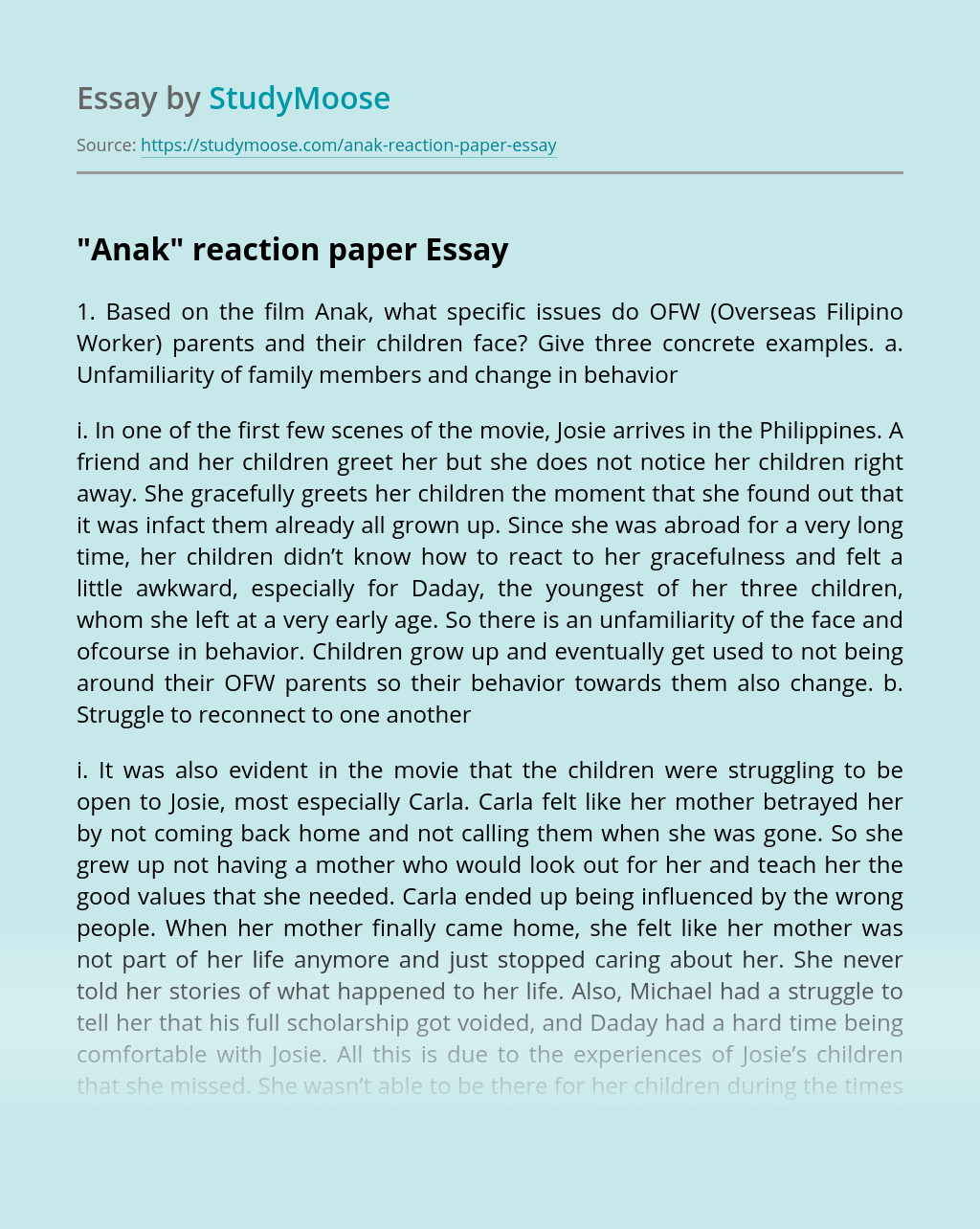