We can safety assume that each individual person has different opinions on different things. An opinion is a point of view, a belief, judgment or attitude. It therefore means that an opinion is not always a truth or fact. A lot of people’s opinions are based largely on their way of life, thinking abilities and morals. Human beings filter every thought or idea by their personal history, beliefs, motivations and concepts that they hold true to their heart.

But many a times, a person or a group thinks that their opinion is right, and the only right one.

Don't use plagiarized sources. Get your custom essay on
“ All people have a right to their own opinions but not the right to force them upon others ”
Get custom paper
NEW! smart matching with writer

Due to this they feel compelled to get everyone else to agree with them. They start running around, forcing their views and opinions onto others, forcing them to join their faction of thought. But I strongly believe that all people have a right to their own opinions but not the right to force them upon others. They imagine a situation and instead of leaving it up to individuals to decide on their action, they want to legislate to force what they see as the right option on other people, thereby depriving others of their freedom of thought.

It is natural for humans to have contradicting opinions but it is completely unjustifiable on their part to solve this contradiction by forcing opinions. When opinions are forced upon, some people might simply accept it, during the process of which they lose their identity, while others might retaliate. I think that a great many wars and tribulations of people could be avoided if we showed more respect for each other and our individual beliefs.

It seems like we have lost the ability to respectfully disagree. This is occurring on the national and state level as evidenced by the increasingly partisan positions that our political leaders are taking, whether it be in international negotiations, or in the national health care debate. Even in debates where the people involved are actually close in their outlook and aims, often vitriol and bitter words are reserved for those who have the same general aims and outlook, but who differ in some of their views. Many communities also try to force their religious values upon other sets of people.

They believe that their idea of the supernatural is supreme and that everyone else has to bow down to it. While having independent religious opinions is fine, forcing others is unethical. The hardships of wars arise when both the sides think they are on the right side. For each of them, their actions are perfectly logical. And so, instead of negotiating and rethinking their decisions, they simply revolt to physical violence.

It has been rightly said that ‘the way the message is delivered is often as important as the message itself.’ Forcing of opinions may lead to a short term win for one party, but in the long term, it is bound to cause more damage than good. It is very essential to take what others say or do into consideration as only then shall we be able to think not in our view or their view, but a third person universal view.

All people have a right to their own opinions but not the right to force them upon others. (2020, Jun 02). Retrieved from https://studymoose.com/people-right-opinions-not-right-force-upon-others-new-essay 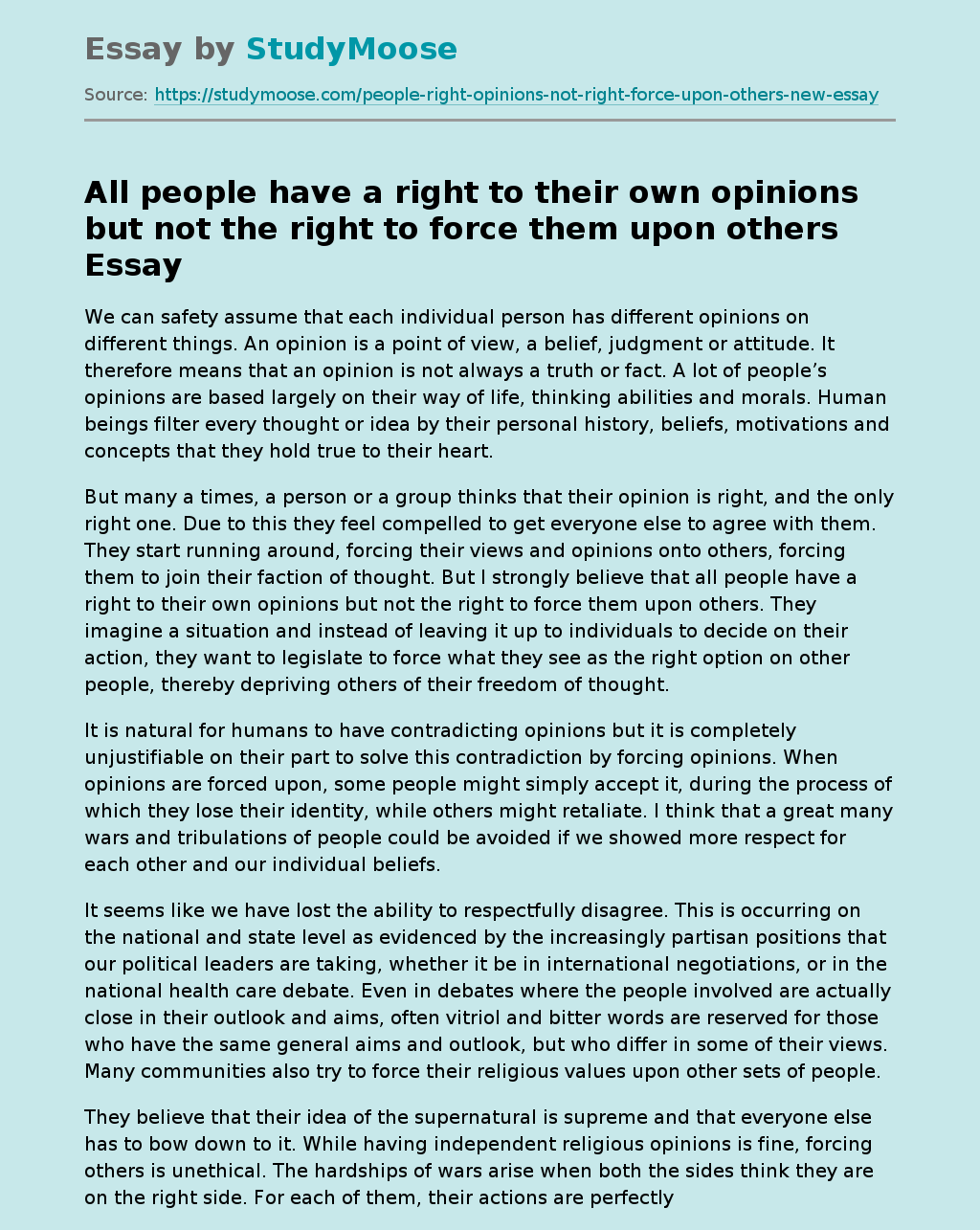