Should we admire heroes but not celebrities?

Should we admire heroes but not celebrities? Plan and write an essay in which you develop your point of view on this issue. Support your position with reasoning and examples taken from your reading, studies, experience, or observations. The term “hero” comes from the ancient Greeks. For them, a hero was a mortal who had done something so far beyond the normal scope of human experience that he left an immortal memory behind him when he died, and thus received worship like that due the gods.

Don't use plagiarized sources. Get your custom essay on
“ Should we admire heroes but not celebrities? ”
Get custom paper
NEW! smart matching with writer

Many of these first heroes were great benefactors of humankind: Hercules, the monster killer; Asclepius, the first doctor; Dionysus, the creator of Greek fraternities. But people who had committed unthinkable crimes were also called heroes; Oedipus and Medea, for example, received divine worship after their deaths as well. Originally, heroes were not necessarily good, but they were always extraordinary; to be a hero was to expand people’s sense of what was possible for a human being.

Proficient in: Bowling For Columbine

Read more: Writing about someone you admire essay

Today, it is much harder to detach the concept of heroism from morality; we only call heroes those whom we admire and wish to emulate. But still the concept retains that original link to possibility. We need heroes first and foremost because our heroes help define the limits of our aspirations. We largely define our ideals by the heroes we choose, and our ideals ­­ things like courage, honor, and justice ­­ largely define us. Our heroes are symbols for us of all the qualities we would like to possess and all the ambitions we would like to satisfy.

A person who chooses Martin Luther King or Susan B. Anthony as a hero is going to have a very different sense of what human excellence involves than someone who chooses, say, Paris Hilton, or the rapper 50 Cent. And because the ideals to which we aspire do so much to determine the ways in which we behave, we all have a vested interest in each person having heroes, and in the choice of heroes each of us makes.

Again, the critical moral contribution of heroes is the expansion of our sense of possibility. If we most of us, as Thoreau said, live lives of quiet desperation, it is because our horizons of possibility are too cramped. Heroes can help us lift our eyes a little higher. Immanuel Kant said that “from the crooked timber of humanity, no straight thing was ever made.” That may well be true. But some have used that warped, knotted timber to build more boldly and beautifully than others, and we may all benefit by their examples. Heaven knows we need those examples now. Question: Is there a value in celebrating certain individuals as heroes? Superman, Wonder Woman, Batman, and Robin are few examples of the many superheroes that prevail in comics and cartoons. Children are captivated by these heroes because of their awesome superpowers, but in actuality what is truly amazing about these heroes is that they remain just, fight for justice, and have apt courage to do so. Many children and adults look up to heroes, whether real or not, as inspiration to become better people.

There is ample reason to celebrate individuals as heroes because not only do they deserve to be extolled but they remain an essential part to our society. Recently, I attended a leadership conference which took place over a three­day period within the snowy pines of Idyllwild, California. About 300 students gathered there to develop leadership skills and be commemorated for excellence. The coordinators of the conference constantly congratulated and thanks us, making me wonder why. Later, a keynote speaker asked us if we through there were heroes in the world and if the world was changing for a better place. Many replied denouncing President George W. Bush’s leadership, but one lone student arised and said “how can we say there are no heroes in the world when we have all gathered here today?” It finally sprung on my with these few simple words that I was grateful for this conference and how the coordinators thanked me.

It inspired me because I was previously wondering, what is the point of being a hero and helping others when there is nothing to be given in return? People need to continue to celebrate heroes like in comic books to prevent them from not continuing to be a hero. Heroes are real people and they need reassurance no matter what good deed they are doing. However, not all people are born heroes. Some are timid and shy their entire life. They remain aloof even when they disagree with something. However, when they do speak out and attempt to open up, they exhibit strong heroic qualities. In my opinion, people that are timid but gain the courage to speak passionately about what they care about are heroes. One girl in my class never spoke out loud in class. She would sit silent in her chair always listening to everyone else. However, one day, maybe she was inspired by someone else, she raised her hadn’t and participated in the debate that day. Once she did so, everyone in the class started clapping. After this, she turned bright red and sat down but after that she became much more involved in class activities.

This simple act of gratitude from the class of clapping our hands was instrumental in her continual participation. If we hadn’t celebrated her heroism of gaining the courage to speak out that day, I don’t think I would have ever been able to hear her ideas. In conclusion, celebration of heroes helps their confidence and inspires others. Assignment: Is it more valuable for people to fit in than to be unique or different? “Lady, I need that seat now,” the white bus driver commanded. The place was a public bus in Montgomery, Alabama. The date was December 1, 1955. For a brief moment Rosa Parks looked at the bus driver and remained silent. What would she do? Would she obey the driver and fit in or would she dare to be unique and different? Which would be the most valuable course of action? During Rosa Park’s entire life, white society had demanded that she fit in, t hat she “know her place.” Fitting in thus meant following the all pervasive rules of Jim Crow segregation. Fitting in meant drinking from colored water fountains, eating in colored sections of restaurants and sitting in the colored sets on a public bus.

Fitting in thus meant obeying the bus driver and humbly taking another seat. On that fateful day, Rosa was tired of fitting in. As all the passengers ­ both black and white ­ stared at her, Rosa made a momentous decision to be different to be unique. In a firm unwavering voice, Rosa gave a one word reply ­ “No.” The bus driver and the other passengers did not applaud Rosa’s act of defiance. Being unique and different can carry a painful price. The bus driver called the police and Rosa spent the next hours in jail. Rosa’s decision to be different, to say no, galvanized the Black community in Montgomery. Led by her young minister, the 26­year­old Dr. Martin Luther King, Jr. the Black community supported Rosa by boycotting the Montgomery buses. The boycott worked. Within 15 months city officials changed the segregation rules on public buses. Rosa Park’s decision to be different helped ignite the Civil Rights Movement.

For almost a century following the Civil War, Black Americans had chosen to fit in. Rosa Park’s singular and courageous decision to be different demonstrates that it is far more valuable for people to be unique rather than to fit in. Without people willing to be different there can be no change. Someone must be willing to say, “No.” The prompt was: Is creativity needed more than ever in the world today In a world, plagued with the horrors of war, poverty, famine and disease, creativity is one way many are able to express their anguish and desires. Whether it be through art, literature, film, music or other forms, Creativity is omnipresent. Three examples that exemplify this are: Picasso’s “Guernica”, “The Gulag Archipelago” by Solzhenitsyn and Michael Moore’s film “Bowling for Columbine”. “Guernica” is considered to be one of Pablo Picasso’s most well­known and valuable paintings.

It was painted in the late 1940s, during the time of the Spainish Civil War and the reign of fascist dictator, Franz Franco. In the painting, Picasso, uses many symbols to express the atrocities of war. People are depicted as being stabbed and brutally murdered. In one section of the painting, Picasso uses a lightbulb in order to symbolize hope. “Guernica” continues to be a symbol of anti­war protest. After its creation, it toured all throughout Europe and America during WWII. Picasso used creativity as a method of protest, during the oppressive regime, and war that plagued Spain during the 1940s. “The Gulag Archipelago” was written by Alexander Solzhenitsyn, in it he addresses the monstrosities that occurred during the reign of Stalin during the mid­19th century. He exposes the horrors of the labor camps, in which many Russians were forced to labor u nder detestable conditions, rank with pestilence. When Solzhenitsyn tried to get it published in Russia, no one would. So, he went to the U.S. to get it published. It was immensely popular and remains an important Cold War artifact.

Solzhenitsyn, used “The Gulag Archipelago” to vent his frustrations with the U.S.S.R. and the cruel and unusual methods that were implemented in Stalinist Russia. Thus, his creativity exposed the world, to something that they might not have realized the magnitude of this issue, without the publication of the novel. Michael Moore, a popular American filmmaker, is known to create thought­provoking, expository films. One of his most famous films “Bowling for Columbine” exposes America’s folly in its gun policy regarding youths and people in general and juxtaposes America’s violent culture with other various cultures, such as Japan and Canada. Another main focus of the documentary, is the Columbine shooting. The columbine shooting, involved two students going on a killing spree in their Colorado high school.

In the movie, Moore and one of the kids that was paralyzed from the incident are able to get Kmart, the place where the shooters bought the bullets, to stop selling bullets. This is very powerful, and illustrates that maybe hope is not lost, and that America can reform its violent ways. Michael Moore uses film as his creative outlet, in order to inspire, educate and expose people to pertinent issues that affect our daily lives. A world without creativity, would not be able to exist. The world, would not be able to last because there would be nothing to inspire or educate people. Thus, life would becoming uniform and meaningless. Creativity allows one to create their own self and separate themselves from others. Thus, creativity is essential to the well­being and preservation of man­kind.

Should we admire heroes but not celebrities?. (2016, Sep 25). Retrieved from https://studymoose.com/should-we-admire-heroes-but-not-celebrities-essay 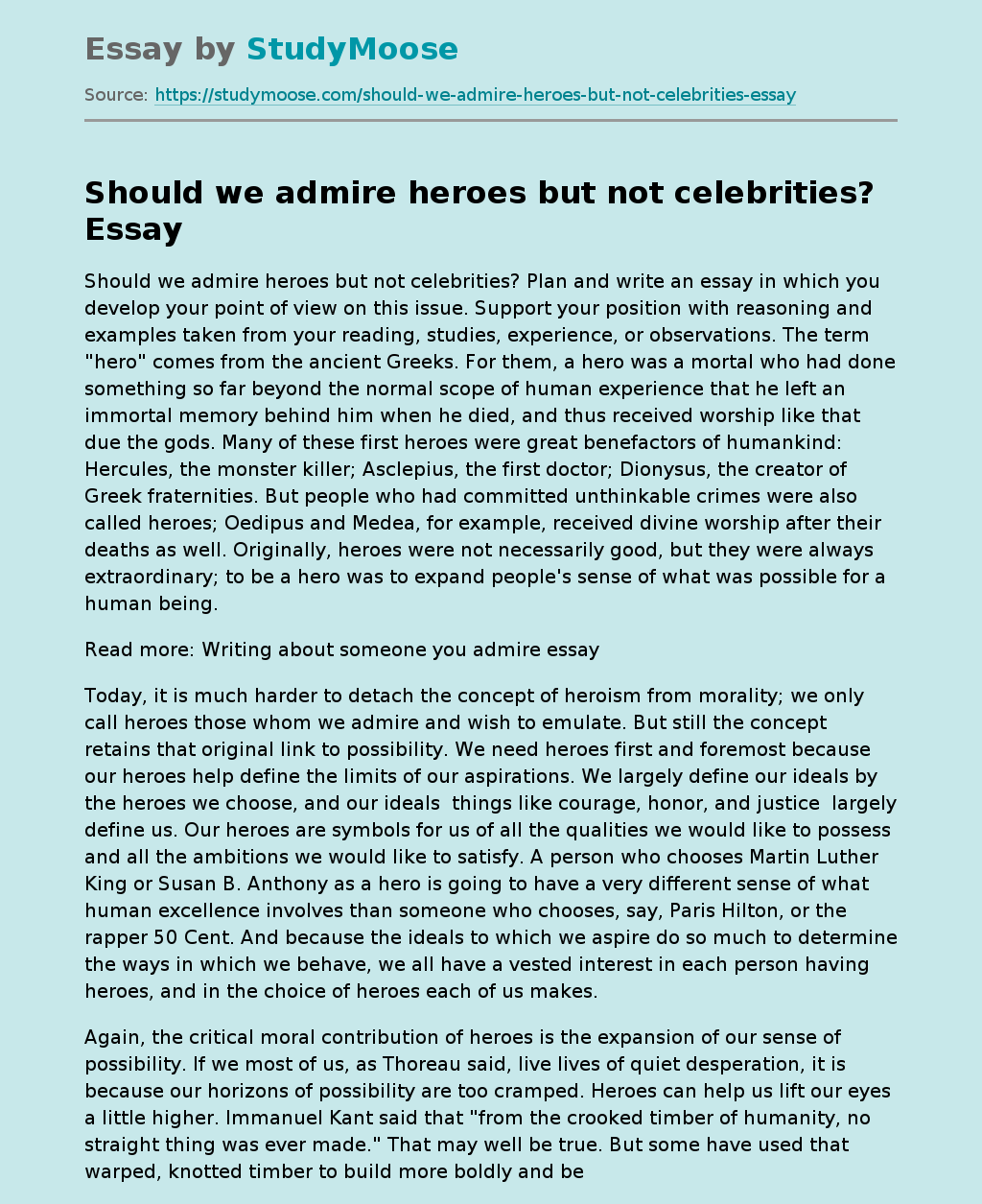