Everything Has A Beauty, But Not Everyone Sees It

People allow their self-proclaimed flaws to dictate how live their lives by limiting the choices they have because they always need to factor how their flaw will affect the outcome.

Characters such as the protagonists from Edmund Rostand’s Cyrano de Bergerac to Alice Walker’s Beauty: When the Other Dancer Is the Self allowed themselves to become insecure because of their self-proclaimed deformity and then they understand the fact that their physical flaw was a part of who they were and thus accepted it.

Don't use plagiarized sources. Get your custom essay on
“ Everything Has A Beauty, But Not Everyone Sees It ”
Get custom paper
NEW! smart matching with writer

Looking at the bigger picture, Cyrano de Bergerac lived with his colossal nose his whole life, in contrast to Alice Walker’s character who was shot in the eye with a copper pellet at the tender age of eight.

Having dealt with something your whole life versus learning to deal with it at a vulnerable age makes all the difference pertaining to how you live your life. Although no specific examples were given in the play, the audience could infer that at an early age Cyrano would not let his nose hold him back from all that he could become.

He took every insult or complaint in stride and fought back with everything he had whether it was brains or brawn. Years of ignoring the stares and laughing at glares allowed him to play up his strengths. On his deathbed was when Cyrano realized that his nose was not a burden at all, but something that made him who he was.

The woman in Alice Walker’s essay Beauty: When the Dance Is the Self, was more greatly impacted because she clung to her former self, the girl that was not known for her strange looking eye.

One can see how her scar affected her outlook on life. During her recollection of the accident she said, “For six years I do not stare at anyone because I do not raise my head.” This young girl lost all sense of self-confidence that she possessed before the incident happened. She did not fight to overcome her flaw, but let it control her and dictate how she lived. She had been traumatized at an early age and did not have the willpower to overcome her hopelessness.

Throughout both Rostand’s and Walker’s works, their main characters exhibit signs of insecurity about themselves which prevent them from following their dreams. For the duration of Cyrano de Bergerac, the audience is presented with examples that invoke the idea that Cyrano is proud of his nose rather than ashamed of it. However, during one of the more intense scenes, Cyrano describes his nose to be a “curse” and how no woman could ever love a man with a nose like his own. That would be the first time he had blatantly voiced his insecurities toward his most prominent feature. His irresoluteness toward his nose is ironic considering that Roxane would have loved him regardless since she had fallen in love with his eloquence. When Cyrano discovered that Roxane would love him despite of his appearance, he still did not proclaim his love for her. Not too long before the 17th century, an unspoken etiquette was followed where for someone to discover love, all they needed to do was find the most beautiful person and win their heart.

Entering the 17th century, French women want to be wooed off their feet by a man who can express his deepest desire through eloquent poetry. Unfortunately, Cyrano did not partake in the notion of loving someone for who possibly because he still harbored his insecurity toward his appearance.

The main character in Beauty: When the Other Dancer Is the Self expressed the same sense of insecurity toward her appearance as Cyrano de Bergerac did. The reader truly discovers the woman’s initial reaction to finding out about her white scar tissue, “Now when I stare at people they will stare back…not at the “cute” little girl but at her scar…for six years I do not raise my head” (Walker). A greater meaning that can be pulled from this statement is because of her deformity, she stayed in the shadows. Basically, she was not living her life to the fullest extent and because of one slight change in her physical appearance that made her unnecessarily reevaluate who she was.

Eventually they released themselves from the mental bind caused by their insecurities. Cyrano de Bergerac overcame his fears at an early age by pumping himself with confidence and as the years progressed he became more sure of himself which allowed people to not know of him by his humungous nose, but by his accomplishments instead. Cyrano was even able to discover that the love he had for his dear cousin was a shared feeling, thus releasing him from the bind his nose gave him.

In Beauty: When the Other Dancer Is the Self, instantaneously the reader sees the change in the woman’s attitude as she describes when a doctor removed the larger portion of her scar tissue. “Now that I’ve raised my head, I win the boyfriend of my dreams, I have plenty of friends, and I leave high school valedictorian, most popular student, and queen.” She felt like she could take on the world and that the sky was the limit. Except, this is not her true defining moment. Her defining moment arrives when she is putting her own child to sleep while pondering how her child will react to her eye. It is when her child shows interest and curiosity instead of embarrassment or shame that she completely accepts herself and all her flaws, thus being released from the chokehold that the scar tissue had been holding.

“Everything has its beauty, but not everyone sees it,” words made famous by the message that they send, you are only as beautiful as you think you are. People are constantly reevaluating themselves on trivial matters such as getting glasses or hating what you were born with. This was made apparent through Edmund Rostand’s main character in Cyrano de Bergerac and Alice Walker’s main character in Beauty: When the Other Dancer Is the Self who had learned to love themselves before expecting anyone else to.

Everything Has A Beauty, But Not Everyone Sees It. (2020, Jun 02). Retrieved from https://studymoose.com/everything-beauty-not-everyone-sees-new-essay 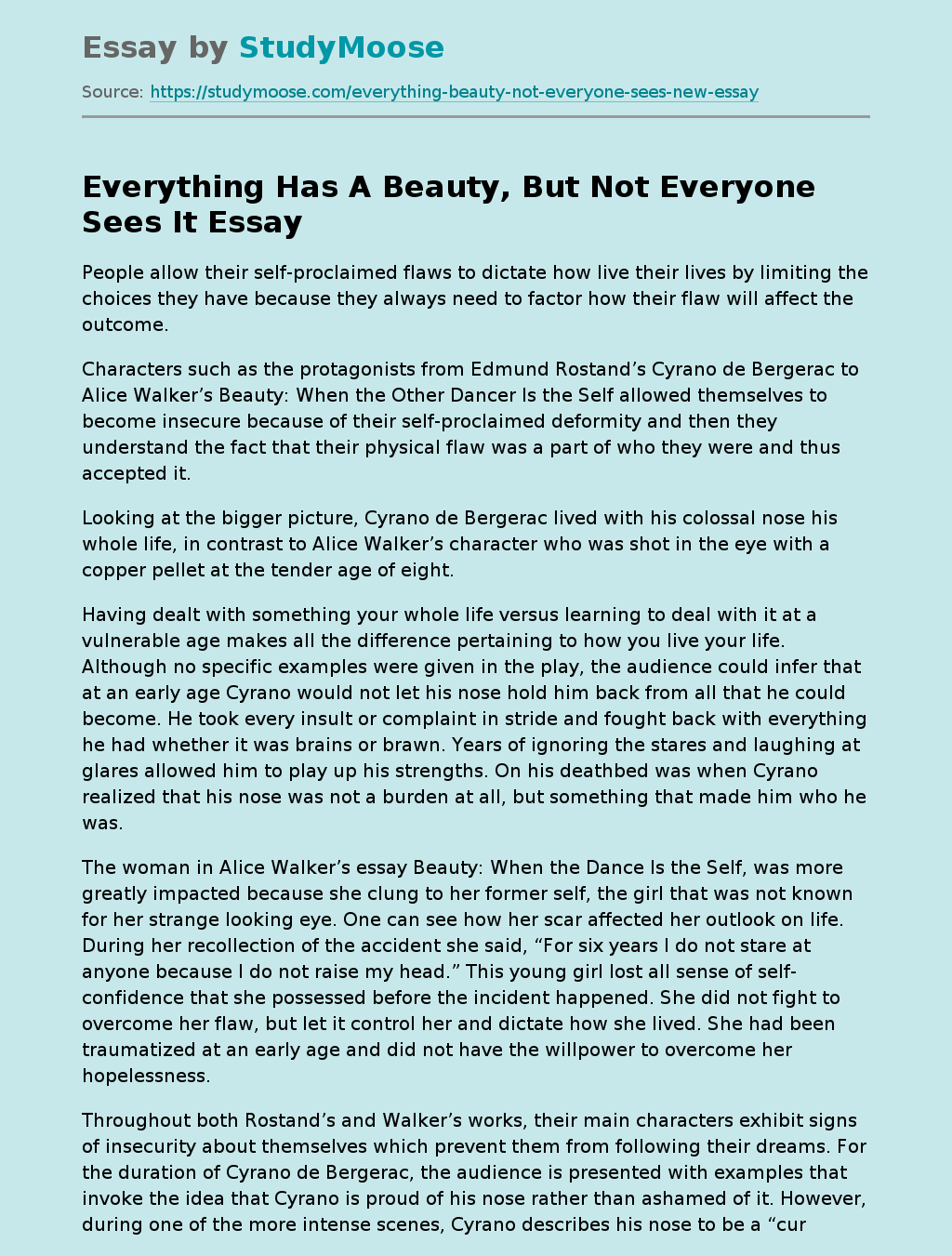