Juliet is the daughter of Lord and Lady Capulet, a wealthy and well-respected family. Although young and members of opposing families in a long-standing feud, Juliet and Romeo fall instantly in love with each other, and marry in secret. Her parents remain unaware of their relationship, and are determined that she marries Paris; it is their hasty actions in bringing about the marriage to Paris against Juliet’s wishes that ultimately leads to the tragic death of the two young lovers.

Don't use plagiarized sources. Get your custom essay on
“ Parents and children in Romeo and Juliet ”
Get custom paper
NEW! smart matching with writer

Lord Capulet and his wife are shown to care for Juliet, and at first it seems that Capulet is reluctant for her to leave the family home through marriage. He argues that Juliet “is yet a stranger in the world”; the word “stranger” shows that he feels she is too inexperienced to marry, and that she should perhaps be older and have had more life experience before marrying. This idea is continued when he encourages Paris to wait for “two more summers” to have passed “Ere we may think her ripe to be a bride”.

Proficient in: Parents And Children Relationship

It might be that Capulet is not ready to let his only living child leave, and is trying to delay the inevitable. Also, the imagery that Shakespeare uses here could highlight the idea that Juliet would be expected to be pregnant very quickly once married, and that her body is only just biologically able to get pregnant. “Ripe” is usually used to refer to fruit, being ready to be eaten; in this case, Capulet is referring to her womb, perhaps, being able to bear children, which is reinforced when Paris tries to persuade Capulet by saying “Younger than she are happy mothers made”.

Capulet shows, however, that Juliet is his priority as he is worried that she would be made miserable and spoiled by early motherhood: “too soon marred are those so early made”. This is different to Lady Capulet’s beliefs, as she encourages Juliet to marry as an indication of her social superiority: “Here in Verona, ladies of esteem,/Are made already mothers .” If Juliet delays getting married, in her mother’s eyes, it would be disapproved of, and maybe others would think there was perhaps something wrong with their daughter. She reminds Juliet that she “was your mother much upon these years”, so she feels that Juliet should follow in her footsteps, without thinking of Juliet’s best interest. Unlike Lord Capulet, she encourages Juliet to marry soon, but it could well be that based on his own experiences of marrying a woman who was very young, he recognises the damage it could do. I think that maybe Juliet’s mother changed once she was married, and Capulet perhaps regrets marrying her so young, which is why he doesn’t want Juliet to marry Paris.

Parents and children in Romeo and Juliet. (2016, Feb 23). Retrieved from http://studymoose.com/parents-and-children-in-romeo-and-juliet-essay 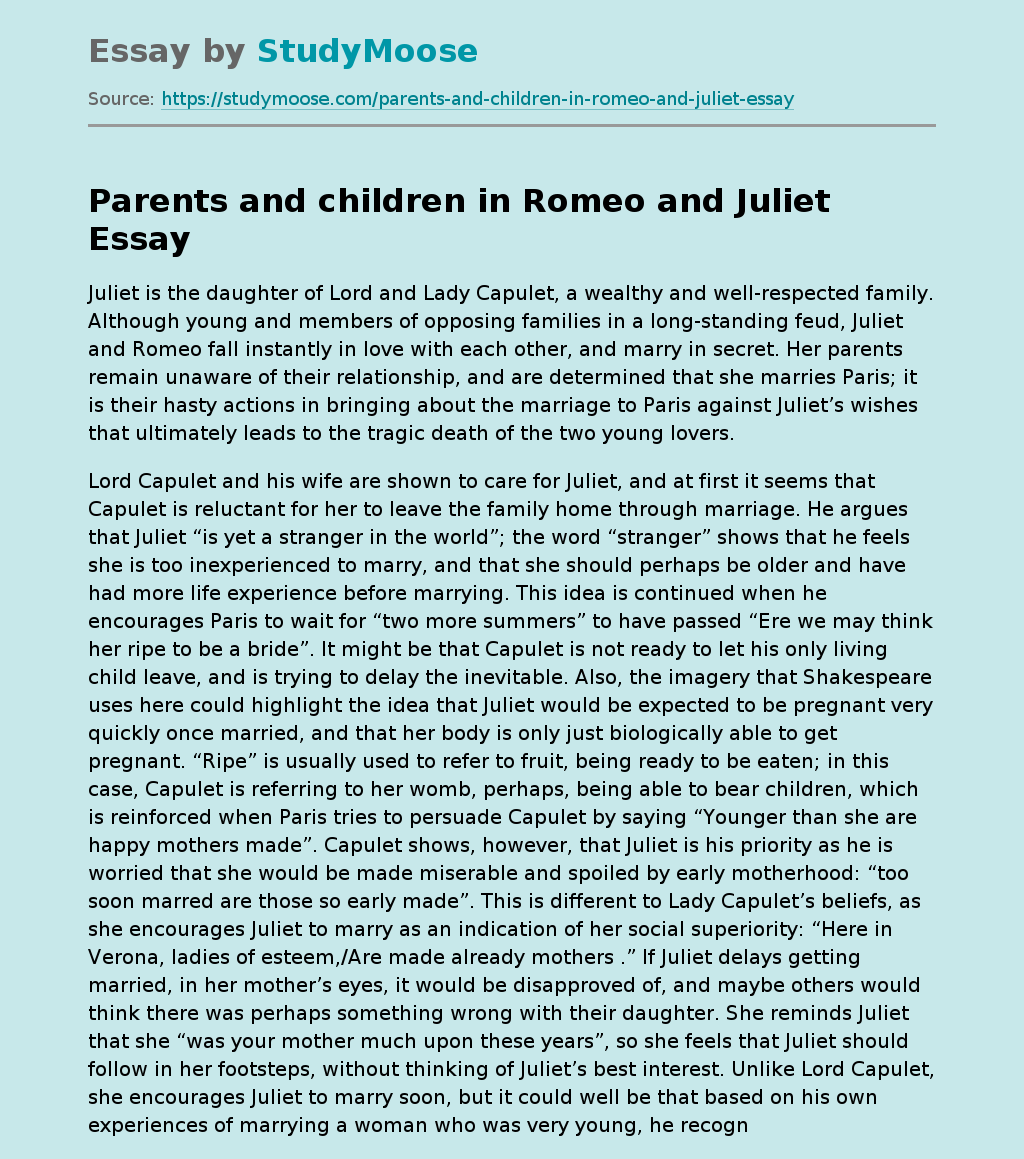