Examine the relationship Juliet has with her parents

Examine the relationship Juliet has with her parents and how it changes by looking closely at their language in Act 1 sc2, Act 1 sc3 and Act 3 sc5.

Through the duration of the play there are many different contrasts and changes to relationships. The most prominent being the shift of Lord Capulet’s feelings for Juliet, from love to almost hatred and disappointment. This is shown through imagery, language, and contrasts.

The context of the play also helps understand the reasons why the relationship drastically disintegrates.

Don't use plagiarized sources. Get your custom essay on
“ Examine the relationship Juliet has with her parents ”
Get custom paper
NEW! smart matching with writer

In medieval times girls like Juliet would not be that close to parents and would have “Wet nurses” to cater for their every need. Also little education was ever given to girls; all their purpose was to marry into a good family and continue the family. Juliet’s life was so cloistered that she would only be allowed out to church. Also her own husband would be chosen on her behalf and she would not be allowed to question it.

Therefore Lord Capulet is very radical as he says, “my will to her consent is but a part”. Meaning that Juliet will have the last say in the matter would be seen, as beyond the norm as most fathers would choose the groom with out any input from his daughter. However, Juliet is the Capulet’s last sibling and technically all hopes rest on her “she is the hopeful lady of my earth”, this shows respect and love he has for her.

In this part of the play Lord Capulet uses lots of beautiful soft imagery to capture the things he feels for Juliet.

For example “earth threading stars that make dark heaven light” translating the young women will look so stunning that they shall shadow heaven. Lord Capulet comes across as the epitome of love and affection. As a parent, he is kind, considerate and proud to be Juliet’s father. Also, he seems reluctant to let Juliet go and let her grow up. The differences between fathering then and now are that fathers give their children freer rein and independence as opposed to the controlled and contrived Juliet in those times. He talks about Juliet as the only love of his life and all his hopes and expectations rest on her; this is a lot to ask of a fourteen-year-old girl. That is another difference between the times; for a girl to marry at fourteen in our times is illegal, but in those days fourteen would be seen as quite old the quote “younger than she are happy mothers made” reinforces it.

Lady Capulet’s relationship at the beginning is quite cold and distant almost as if Juliet is not that important. In the medieval times all the work (cleaning, weaning.) would be done by “wet nurses” this was common practise with the aristocrats of the era. As a result Lady Capulet would be quite detached of Juliet. Also as a woman, Lady Capulet would not have much say in things to do with Juliet’s welfare.

As a character Lady Capulet she is quite ambiguous and quietly blends into the background, with the exception of a couple sharp remarks “Here comes your father, tell him so yourself; and see how he’ll take at your hands”. She just lets Juliet defend her self even though she is highly vulnerable at the moment. Also another observation of the relationship is that it is very impersonal and instead of addressing Juliet with warmth and love, Lady Capulet says “my daughter Juliet”.

The pivotal point of the relation ship between Juliet and her parents happens in Act 3 scene 5, where Tybalt is killed in a fit of rage by Romeo (Juliet’s lover/husband). When Juliet hears have this she is distraught and confused. This is where the calamity of the situation becomes apparent. Lord Capulet enters and is unhappy to see his daughter and tries consoles her,” how now a conduit, girl… What still in tears?”

As Lady Capulet tells Lord Capulet of Juliet’s disagreement to the marriage of her and Paris his first reaction is of mild confuse “Is she not proud?” and thinks it is who he has chosen is the problem.

This confusion escalates into anger and throws all kinds of insults at Juliet. He even goes on to insult the nurse “peace you mumbling fool” and treats her with no respect that she would deserve as his child’s sole protector for fourteen years. Examples are “mistress minion” meaning a prostitute, which translates that Lord Capulet sees his daughter’s love as a sin. “You tallow face!” simply means ugly faced, this shows that the value of his only daughter has gone drastically down. “Green sickness carrion” meaning a disease carrion shows that Lord Capulet is now resorting to bullying tactics. “Wretched pulling fool” is another example of this. The last quote “out on her hiding” being the worst as in those days the threat of being thrown out would be the end of the world as you would not have the experience or the independence as apposed to us in this era we are very independent and can probably survive.

The most unusual thing in all of this is the shock of Lord Capulet shock to Juliet’s answer. He almost is shocked at the audacity his daughter has to refuse him. This is an unexpected reaction that we as readers would not expect, wasn’t he a man a couple of acts a go saying that Juliet’s decision is the most important. Now we start to wonder was he at all liberal to start with or was it a ploy to get Juliet to consent and make him look good or was it that he never thought that Juliet would ever refuse. Lady Capulet’s reaction to this full-blown family argument is to take the back seat and makes no noticable attempt to save her daughter and lets Lord Capulet throw all these insults at their only daughter. The only feeble attempt she makes is “you are too hot”. Which is Lady Capulet trying to calm Lord Capulet’s hot temperament. Lady Capulet even goes on to even disown Juliet “do as thou wilt, for I have done with thee” Which shows Lady Capulet has given in to Juliet and therefore washes her hands of her. This is the last nail in the coffin for Juliet. Romeo and the nurse are now her only remaining pillars of strength.

There is a very dramatic change in Lord Capulet’s personality he goes from a loving father to a fuming hothead, all this from a refusal. In his time this would not be uncommon some might even say is what Juliet deserved, but in our time this is seen as brutal, and inconsiderate. All in all the relation ship between Juliet and her parents completely disintegrates as a consequence of Juliet’s forbidden love. In those days her parents’ reaction would not be uncommon and would be quite expected. The language used to convey this is a mixture of expression and cleverly chosen imagery.

Examine the relationship Juliet has with her parents. (2020, Jun 02). Retrieved from https://studymoose.com/examine-relationship-juliet-parents-new-essay 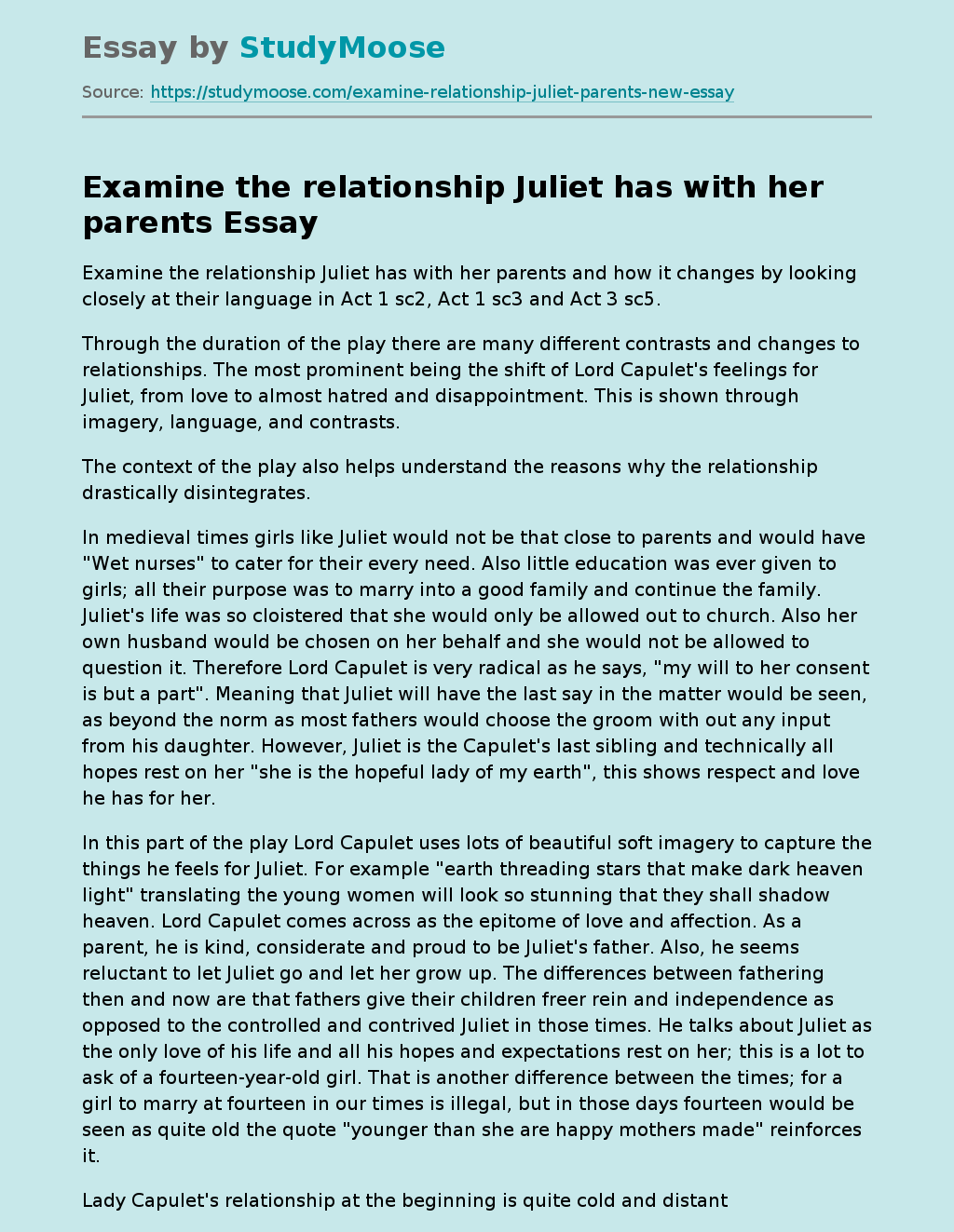