In 1984, Orwell makes excellent use of symbolism to further enhance the novel’s themes. Orwell wrote 1984 as a political message to warn future generations about the dangers of totalitarian societies. He urgently relays this message through various themes, and in turn utilizes powerful symbols to give these themes further significance. Psychological and physical control is a theme that Orwell religiously includes throughout the novel. Symbols such as doublethink and the telescreens provide a direct connection to this theme. Another theme apparent in 1984 is that of intellectual rebellion and the desire to diverge against a higher authority.

Turn in your highest-quality paper
Get a qualified writer to help you with
“ Orwell’s use of symbolism in “1984” ”
Get high-quality paper
NEW! AI matching with writer

Orwell, through Winston’s journal and glass paperweight, manages to use these symbols to assist in the portrayal this theme.

One of the party’s main goals is to control its people’s thoughts. By deliberately weakening one’s recollection of the past and flooding their minds with propaganda, the Party is able to replace individuals’ memories with its own version of the truth. Winston, however, struggles to try and remember his history.

He is persistent in trying to make sense of what has happened to the world. In turn, he buys a glass paperweight in an antique store, which symbolizes his attempt to connect with the past. “And when memory failed and written records were falsified?when that happened, the claim of the Party to have improved the conditions of human life had got to be accepted, because there did not exist, and never again could exist, any standard against which it could be tested.

” This is when Winston, after conversing with an old man, realizes that the Party has deliberately set out to weaken people’s memories in order to control their fabricated version of the present.

When The Thought Police arrests Winston for his attempts to recall the past, the glass paperweight shatters. It is as if all his ideologies and hopes to make sense of the world have too shattered. Since the party maintains such control over its citizens, an individual caught thinking against what the party deems as acceptable, can be arrested and punished. Similar to the paperweight, the dust also represents Winston’s attempt to connect with the past and intellectually rebel against Big Brother. Winston and Julia met in a dusty room in the Prole district of Oceania. The Proles represent what life was like before the revolution, and before The Party came into power because they live uncontrolled lives. Yet, they too symbolize hope. Winston hopes that the Proles will one day rise up against Big Brother and restore freedom to all citizens. The paperweight, the dust and the Proles each represent Winston’s knowledge that there exists a higher meaning other than Big Brother. Consequently, throughout the novel he reveals this to readers. An example of this is when he subconsciously writes “DOWN WITH BIG BROTHER” five times in his journal.

Furthermore, the journal in which Winston dutifully writes his innermost feelings in, represents the forbidden but also ties into the theme of control. Big Brother has such restrain over his citizens, that a mere expression of free thought, or attempts to recall past events, are considered to be serious thought crimes. In writing in his journal, Winston essentially rebels against Big Brother. He knows that it is a severe crime in The Party’s eyes, but does so anyhow. In his journal, Winston writes things that allow readers to believe that he recognizes the dangers of the society he lives in. The party’s goals of complete psychological and physical control over people are too much for Winston to handle therefore he expresses these beliefs on paper.

He writes, “Freedom is the freedom to say that two plus two make four.” Because doublethink has been introduced by Big Brother to essentially brainwash the public, the above statement is not considered true. The Party, through doublethink, tries to make citizens believe that two plus two equals five, which is clearly false. For this reason, Winston’s journal provides him with a temporary out, an escape from his corrupted world.

In 1984, Orwell includes ministries that are responsible for various things. Their names however, contradict their functions. The Ministry of Peace encourages war, the Ministry of Truth produces propaganda, and the Ministry of Love operates based on acts of torture and punishment. This concept, known as doublethink is The Party’s method of absolute control. Orwell uses doublethink to portray the brainwashing techniques totalitarian governments exercise. Doublethink has lead citizens to believe that two plus two equals five. As the Party’s psychological control techniques break down an individual’s ability to think freely, it becomes possible for that individual to believe anything they are told, and this is the ultimate form of psychological control.

Just as doublethink symbolizes psychological control in 1984, the telescreens represent the aspect of physical control The Party has over its citizens. The telescreens provide a faceless surveillance window into each person’s life. These devices are totally perfected in that they can detect almost anything, even the beating of one’s heart. “You could not control the breathing of your heart, and the telescreens was quite delicate enough to pick it up” Because the telescreens can never be turned off, residents of Oceania are constantly monitored. They symbolize the bodily power the party has over its people. Their omnipresence gives individuals no freedom whatsoever and Orwell uses them to warn his readers about the lengths a tyrannical government will go to, to gain total physical control over its people.

Through the use of symbolism, Orwell assists in relaying his political message to readers. The Party floods residents of Oceania with psychological motivation designed to overwhelm the mind’s capacity for independent thought. It also uses advanced methods of technology to control one’s every move. Yet Winston, who although is more or less controlled by Big Brother, manages to somewhat diverge. Moreover, Orwell portrays the themes of intellectual rebellion and ultimate control through the use of many unique symbols. The paperweight, the Proles and the dust all show Winston’s desire to connect with the past, something completely forbidden by The Party.

Along the same lines, Winston’s journal also acts as a symbol to illustrate his desire to rebel. Whereas doublethink symbolizes the psychological control Big Brother had on his people, the telescreens symbolize the physical control he had over his subjects. Orwell’s main goal in writing 1984 was to warn future generations about the dangers of totalitarian governments. He effectively does so by incorporating themes, which correspondingly embrace symbolism. All of these symbols give 1984’s themes intensity and deeper insight into the novel. 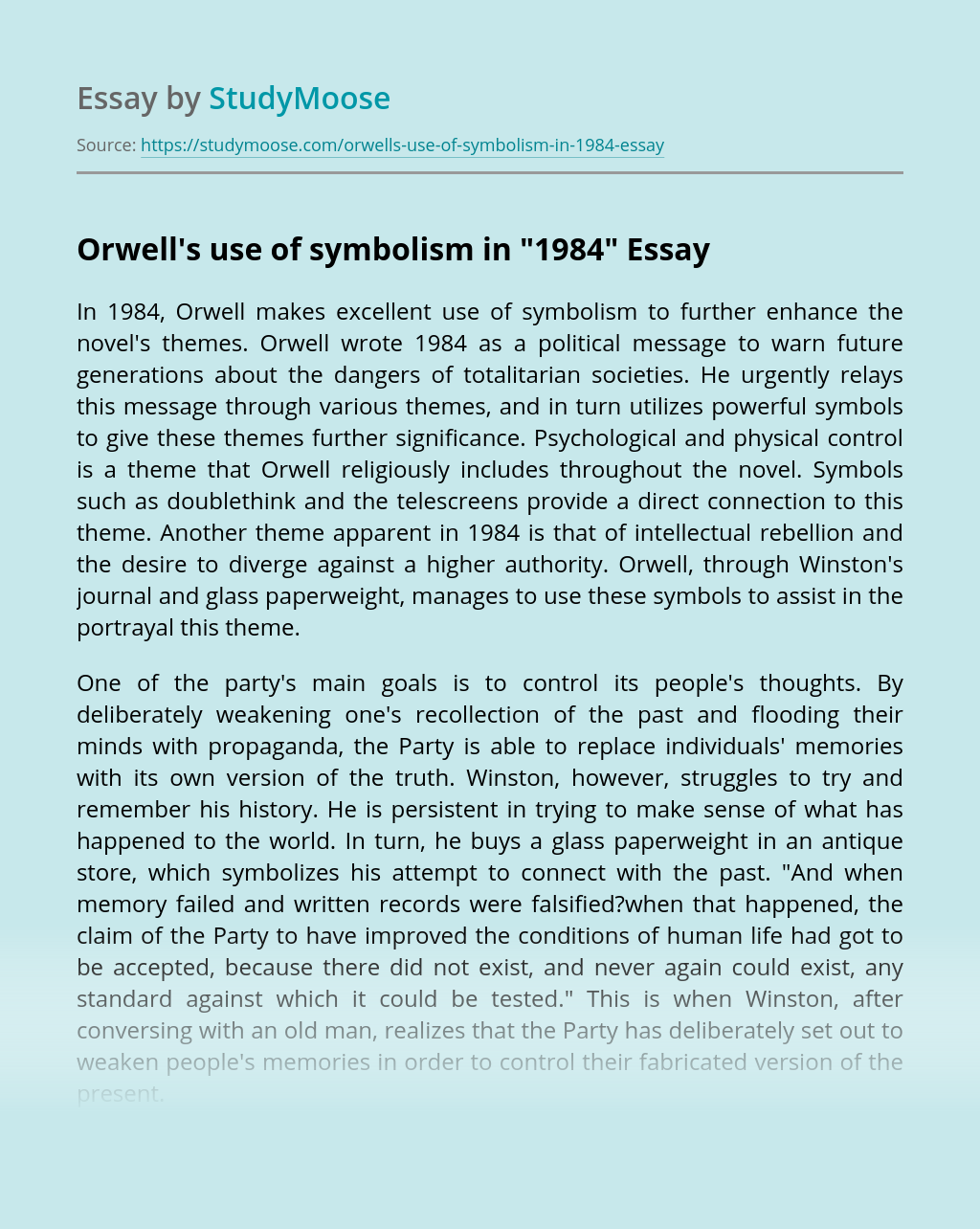 Turn in your highest-quality paper
Get a qualified writer to help you with
“ Orwell’s use of symbolism in “1984” ”
Get high-quality paper
Helping students since 2015
Stay Safe, Stay Original