One More Day to Live

In Pennsylvania, they lived a man named Robert Osterrieder. Osterrieder was a beloved family man who was hospitalized because of vision issues. After several months on life support, his family realized that he did not have long to live. Osterrieder had registered as an organ donor, but due to his very poor health, his organ was unstable to be harvested after death (Marcus, 2016, para. 1-4). His wife and kids faced a difficult decision: Having to harvest his organs be unethical once he died even if he wanted too? Many see organ donation as unethical; in some eyes, organ donations are acceptable regardless of person, religion, and beliefs.

Don't use plagiarized sources. Get your custom essay on
“ Organ Donation ”
Get custom paper
NEW! smart matching with writer

The idea of behavior that may be ethical can be odd to some.

One’s actions can be contradictory to someone’s beliefs or thoughts. According to Meriam- Webster, ethics can be defined as the discipline dealing with what is good and bad and with moral duty and obligation (Meriam- Webster, 2019). In Robert Osterrieder’s case, he had registered to become a donor through the state government and was one who would donate blood routinely (Marcus, 2016, para. 5). Many can argue that Mr. Osterrieder has given consent to donate his organs after he died because of the registration and proof on his state identification card.

Furthermore, how could one consent to have their organs donated when they are still alive and breathing? Osterrieder was still battling for his life with the help of life support; Osterrieder’s organs would not survive after his death. The final decision would have to come from his family to ether fulfill their beloved family member’swishes or let him live with medical support. With the family choosing his decision, it would be ethical to let the family chose to allow medical professionals to harvest and donate his organs because of his wishes.

When going into depth, many medical professionals and those against organs donations believe that giving consent is more than just signing a document stating that one is registered for donating their organs. In Organ Donations, Brain Death and the Family, an article written by Ana Iltis (2015), the author begins to say, valid informed consent is ethically required for organ donation when organs will be retrieved from individuals declared dead using neurological criteria· Valid consent is a threshold lower than theoretically ideal consent but higher than authorization, which requires only agreement or permission regardless of what a person understands, meaning that she believes as well as others that someone committing to donating their organs should be fully informed of what they are getting themselves into. She then begins to say that the donor must get every single piece of information they could get their hands on, rather it is something good about certain procedures or the bad side of those procedures. In a study taken place in Australia, 630 men and 650 women were studied on the topic of organ donations (Rockloff & Hanley, 2014, para. 1). During the study, it was shown that those who were interviewed gave a positive outlook on organ donations and were even influenced to become a donor. The survey kind of hold hand in hand with Robert Osterrieder’s ordeal. It is presumed that since Osterrieder gave blood and registered to be a donor is equal to him giving consent, and also be okay with it since all he wanted to do is to be able to help another life.

Lastly, the idea of letting Osterrieder’s family chose if it would be ethical to harvest his organs can give others the idea of how many people he would be helping out. Since the beginning of time, humans were made with the need of helping out others in all sorts of situations (Saleeby, 2001, pg. 93). It is a theory called reciprocity or self-determination. Reciprocity is the idea that motivated behavior that is rewarding form oneself or others (Oarga et al, 2015, pg. 45). With this idea in mind, Robert Osterrieder knew what he was getting himself into and was okay with that fact. It would be ethical for the family to continue with Mr. Osterriede’s wishes on donating his organs.

There are many that disagree with the idea that the family should pull the plug on the life support just so Osterrieder could have his organs harvested. The reason being that Mr. Osterrieder is not completely dead. Machinery is sustaining his life, leading to the fact that he is still alive, and it would be inhumane for them to harvest his organs. No one may not know if Mr. Osterrieder was fully informed about his decision in donating his organs. Also, many argue that if the family went through with harvesting his organs, there would be a rise in the black market of organs. Those who take advantage of patients on life support are most likely involved with stealing. They place the price higher for those so desperate for getting an organ. 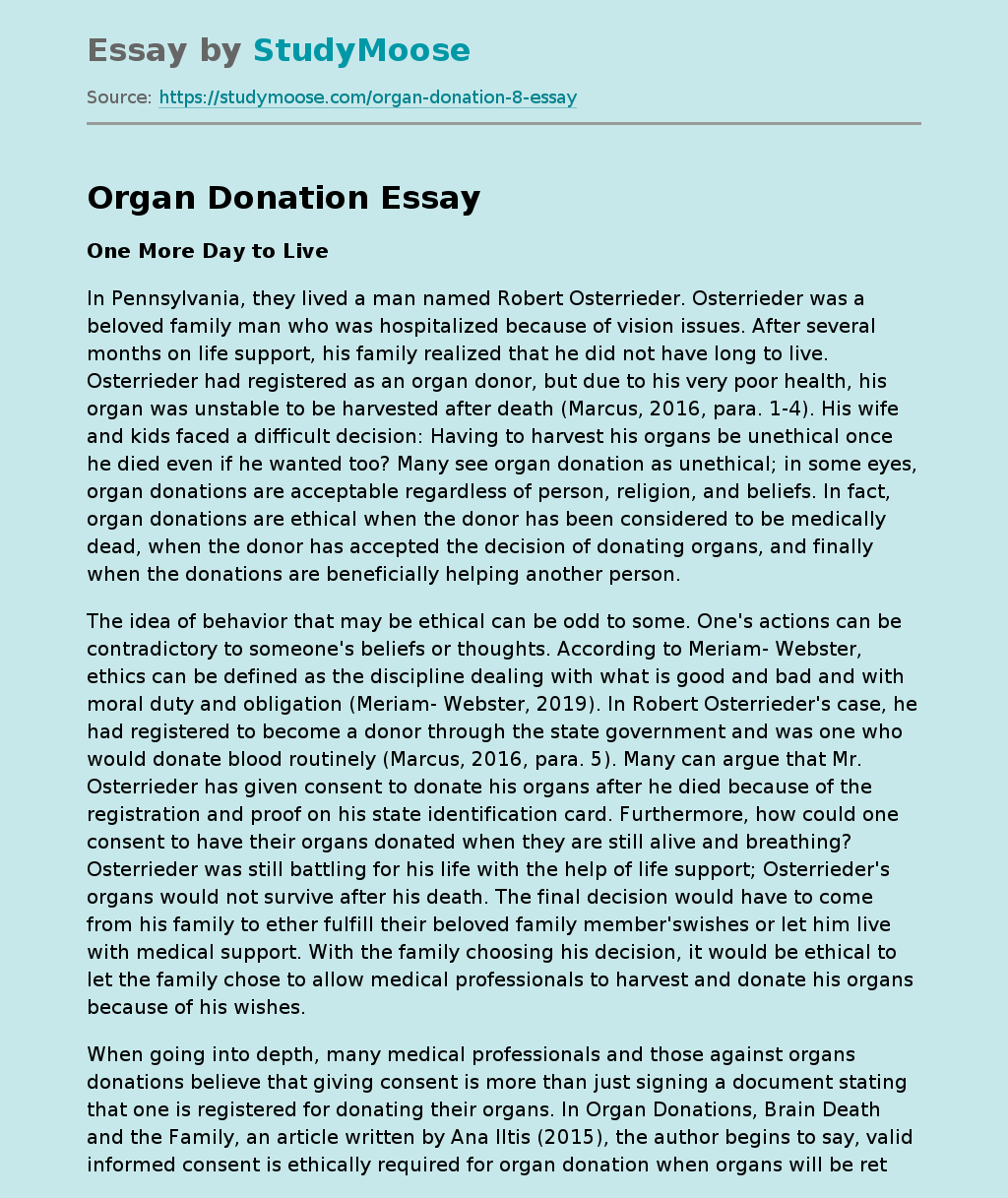